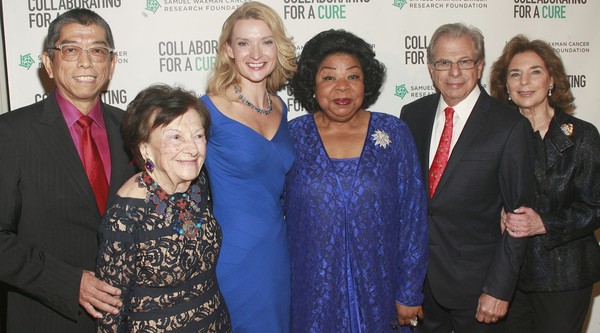 (NEW YORK) While the room may have been a sea of suits from Wall Street, last night one of our very own in the fashion industry was honored for his work with the Samuel Waxman Cancer Research Foundation at the 16th annual Collaborating for a Cure Gala at the Armory on Park Avenue. Tadashi Shoji was the night’s honoree alongside Arthur Imperatore Sr., the President and COO of the N.Y. Waterway.

Shoji became involved with the Samuel Waxman Cancer Research Foundation after his good friend Ruth Finley (yes, the queen of the New York Fashion Calendar) introduced him to the cause. “Ruth [Finley] introduced me to the cause and it started first with me donating a couple of dresses for one of the foundation’s events,” said he said. Shoji is no stranger to cancer himself, having had the disease touch the lives of those closest to him. “Last year my best friend of 30 years passed away from lung cancer and then six years ago my mentor Bill Whitten, who gave me my first chance at a fashion career in the United States, passed away from brain cancer,” said Shoji in a film that was played to the audience. “But luckily two of my brothers are survivors of cancer. I’m very happy if I can help even in the smallest way possible.” Shoji said he was impressed by the research being done at the Samuel Waxman Cancer Research center and said that Dr. Waxman had told him, “Even great scientists alone cannot cure cancer. If you help this organization, I think you can get peace of mind coming back to you.” Funding is unfortunately the biggest obstacle in cancer and medical research. But Shoji said, “Those of us in the fashion community are very passionate about making change. I think we can win against this fight against cancer…we can win.” Shoji was introduced for his honor by friend and actress Andrea Powell, and was joined at dinner by his team from HL Group as well as Ruth Finley and the world-renowned opera singer Martina Arroyo all of whom were wearing Shoji’s designs.

Guests dined on filet mignon (this is a Wall Street heavy function, after all!) followed by a mint and chocolate tarte complete with a vial of mint crumbs resting on top. Post-dinner guests bid on some very luxurious auction items, including a private tasting for 25 at Italian Wine Merchants, a five-day stay at the Ian Fleming villa at the Goldeneye resort in Jamaica, and the cutest auction item of all, a baby English Golden Retriever! And, naturally, a hand-beaded Tadashi Shoji gown and two tickets to his Fall 2014 runway show. Afterwards, guests were treated to a live performance by the Grammy-winning band Train, which had the crowd dancing the night away.
PAIGE REDDINGER

Justin Cupps Gives Us a Tour of...

The CFDA Rolls Out The Revamped Fashion...