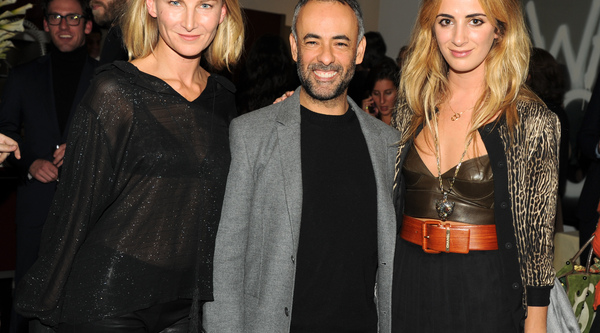 “We’re just here in town for a couple days, and we thought it’d be nice to gather some friends and family together,” explained one of System’s co-founders, Alexia Niedzielski. The mag’s connection to the plush West Broadway digs that hosted this friends-and-fam shindig? The loft of The Fancy’s David Perry (and what a loft indeed!)—the glossy did a story on the booming site in its second issue. As Niedzielski double-air-kissed partygoer Julia Restoin Roitfeld, we had to wonder how the duo got acquainted. “Officially we met in in Moscow, no?” said Restoin Roitfeld. “We’ve got that Parisian connection!” It’s a connection that can’t be defined, apparently, but is easy to I.D. across a room. “You’ll be at a party in New York, and you’ll spot the Parisian from far away,” explained Niedzielski. “Maybe we look less friendly?” offered Restoin Roitfeld with a laugh.

Pitcher after pitcher of Bellinis were mixed as the room sampled prosciutto-swathed breadsticks, petite feta and tomato pastries, and tuna tartare on crostini from Cipriani’s West Broadway outpost across the street. Besides flipping through the mag, which was strewn about the loft, entertainment options included a performance by mod Jamie Bochert.

What brought Mickey Boardman out and about for some schmoozing and perfectly al dente penne? “I love Elizabeth [von Guttman, System co-founder] and Alexia—they’re so smart, high-fashion, real, and cool; they’re the real deal.” I’ve already tweeted a photo of the new System and wrote my favorite new magazine. Don’t tell Paper I said that!” As for their meeting? It was back when some of the duo of editors was at Industrie still, over lunch in Paris. “You’d think we’d be such opposite—they’re so high-fashion and European, while Kim and I are so New York in a down and dirty in a way,” Boardman recalled. “We were instantly in love the second that we met.” Now, who doesn’t adore a good unexpected-editor-pals tale…
ALEXANDRA ILYASHOV

DVFâ™¥HVN: The Cat's More Than Out Of The Bag