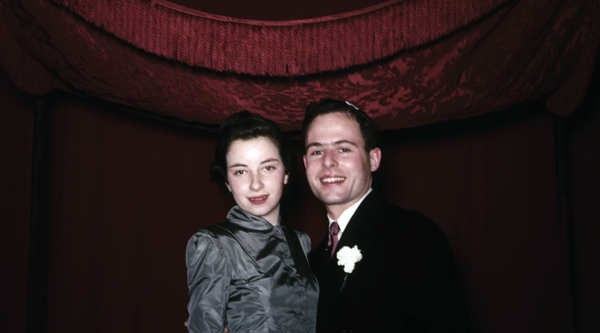 (NEW YORK) In February, renowned cake designer Sylvia Weinstock and her husband Ben celebrated 64 years of marriage together. What’s their secret? The Queen of Cakes lets us in on her winning recipe.
BY MARIA DENARDO

Sylvia, how did you meet Ben? We heard there was a yellow bikini involved!
Sylvia Weinstock: We met when I was 17 years old. My older Cousin Ruthie took me to Far Rockaway Beach with a group of her friends on the 4th of July, and I wore a yellow bikini to the beach. I wanted to go swimming in the water, so I asked if anyone wanted to swim with me and some young man volunteered. The next day, our little group met up at the beach again. That same young man asked, ‘Would you like to go out one night?’ Of course, I said yes!

Ben, what did you think of her teeny bikini?
Ben Weinstock: She was appetizing! And I enjoyed being with her. Sylvia was the youngest; she was shy. But the next evening, we got together at her Cousin Ruth’s house. Sylvia and I curled up under the front of an upright piano. That was our first kiss.
S: He kissed great! It was fun. You know, the older man…

What was your first date like?
S: Our first date was at the Louisiana Stadium by City College. Lots of young college and high school kids would bring pillows and blankets to sit on while they listened to the classical music under the stars.

How did he propose?
S: There was never really a marriage proposal. We went to his parents’ house, and my parents came, too. He took me aside and gave me a small diamond ring, which I thought was the cat’s meow! We were engaged in November 1948 and married in February 1949.

What did your parents think about you tying the knot at 19?
S: They thought I was too young to marry since I was still in college. They felt I wouldn’t finish school or “amount to anything.” But I graduated from Hunter and became a school teacher, later getting a Master’s in psychology; Ben graduated from NYU Law. We had a family—three wonderful daughters—and lived in Massapequa, Long Island in a little Cape Cod-like house that grew as the family grew. I was in my 50s before I decided to go into the cake business.

How was your wedding?
S: There was no money in those days. We got married in the assembly hall at The Jewish Theological Seminary in Manhattan. There were a few relatives that attended, and my Cousin Ruth bought me a pink rose bouquet. The ceremony was short and sweet, and we toasted with a glass of wine and honey cake. Afterward, my aunt gave me a $15 check as a gift. That meant a lot to me because I didn’t grow up with money. To put it into perspective, my first job as a school teacher was $2,100 for the whole year.

Did you have a typical wedding gown?
S: I wore a strapless, grey silk dress with a jacket that I had made. You couldn’t get fabric in those days. It was 1949, right after the war. Ben was wearing a grey pinstripe suit that looked like a zoot suit!
B: That suit was all I had, besides my uniform. I always say, ‘I spent three years in the army, and Sylvia was my prize!’
S: You won me!

Did you go on a honeymoon?
S: We were married on a Friday and were back at school on Monday. That was the honeymoon.
B: We went to Washington, D.C. for two days. Then came back to enroll for our next semester.

How did you celebrate your 64th wedding anniversary this year?
S: I’m in the celebration business, so I don’t do big celebrations a whole lot in my personal life. But for the past 20 years on our anniversary, we celebrate by having dinner with our friends, Judith and Gus Leiber.

Have you ever renewed your vows?
S: Every morning! [laughs] I don’t think it’s something we would do formally, but if people need to do it, let them. Some people need to have the audience, but I don’t.

What’s your favorite time together?
S: Probably around 5 or 6 o’clock when we have a drink together after my work day is done.

What do you think about couples living together before marriage?
S: Whatever works for them!

Thoughts on gay marriage?
S: The word gay means happy, too. If two people of any persuasion want to get married to each other, I bless them. I’m all for gay marriages!

What’s your advice to young couples getting married?
S: It’s important to give each other space, so you grow as an individual and bring that growth and knowledge back to the relationship. Also, every day go out of your way to do something nice for your partner. Ben and I like to do that for each other. I’ve met too many young women who confuse sex with love. I understand the passion, but love is something you nurture through time. That’s what makes a marriage.

How do you weather the storms?
S: You’re there for each other, you work it out, and you never sleep on an argument. I always say, ‘Ben, just say you’re sorry and we’ll just go to sleep.’ It diffuses the situation. Nothing is that important. And if it is that important, you’re going to bed with the wrong person.

What’s your take on that, Ben?
B: [laughs] I’ve learned. She’s educated me.

How do you handle divas on the job, Sylvia?
S: Every once in a while, I get a couple who comes to see me and after the one hour interview of tasting cakes, I really want to tell the boy to run! As I climb the ladder, I run into more people who are on top of the heap and forgotten how they’ve gotten there. But, the majority are decent and kind. That’s the wonderful thing about being 84-years-old—the divas are nice to me. People even give me a seat on the subway!

You take the subway?
S: All the time! Why not? We’re senior citizens, so we have our cards. People like us wash our clothes, do our dishes, make our beds, take out the garbage, take the subway, and go to work.

What’s business like for you these days?
B: Money is tight right now with the wedding venues that Sylvia used to get loads of orders from. Plus, there’s been a blossoming of people who are trying to do what Sylvia does, which affects the business.
S: When I started, I was the new kid on the block—the only kid on the block. Now, everyone wants to be a cake decorator. But a cake decorator is just someone who does things on plastic, as far as I’m concerned. They’re not bakers. They don’t use high quality ingredients, and they undercut prices. A baker is at the core of what it’s about. I get very angry about that.

How do you combat the competition?
S: We’re licensing and branding, looking at the Middle East and Asia. And it doesn’t have to be just cakes. Maybe we’ll do tableware, too. We’re a luxury brand, and we’re going to follow the trend. Asia wants everything American, and the Middle East loves sweets. They need us, too.

So, I take it there are no plans for retirement any time soon?
S: Never! I don’t even know what that means. What would I retire to? I’m not a golfer. I’m not a card player. I don’t want to shop or be on committees. I want to work. And Ben supports me every step of the way—always has. Life is never in isolation. It’s in collaboration with a partner or some partners. Luckily, I have a great partner, and he’s been with me every step of the way.

PLUS! Check back next week for another slice of the Weinstock’s: the business edition!

Catching Up With Colin Cowie

Sit Back And Watch

Desigual Gets $369.4 Million Investment From Eurozeo