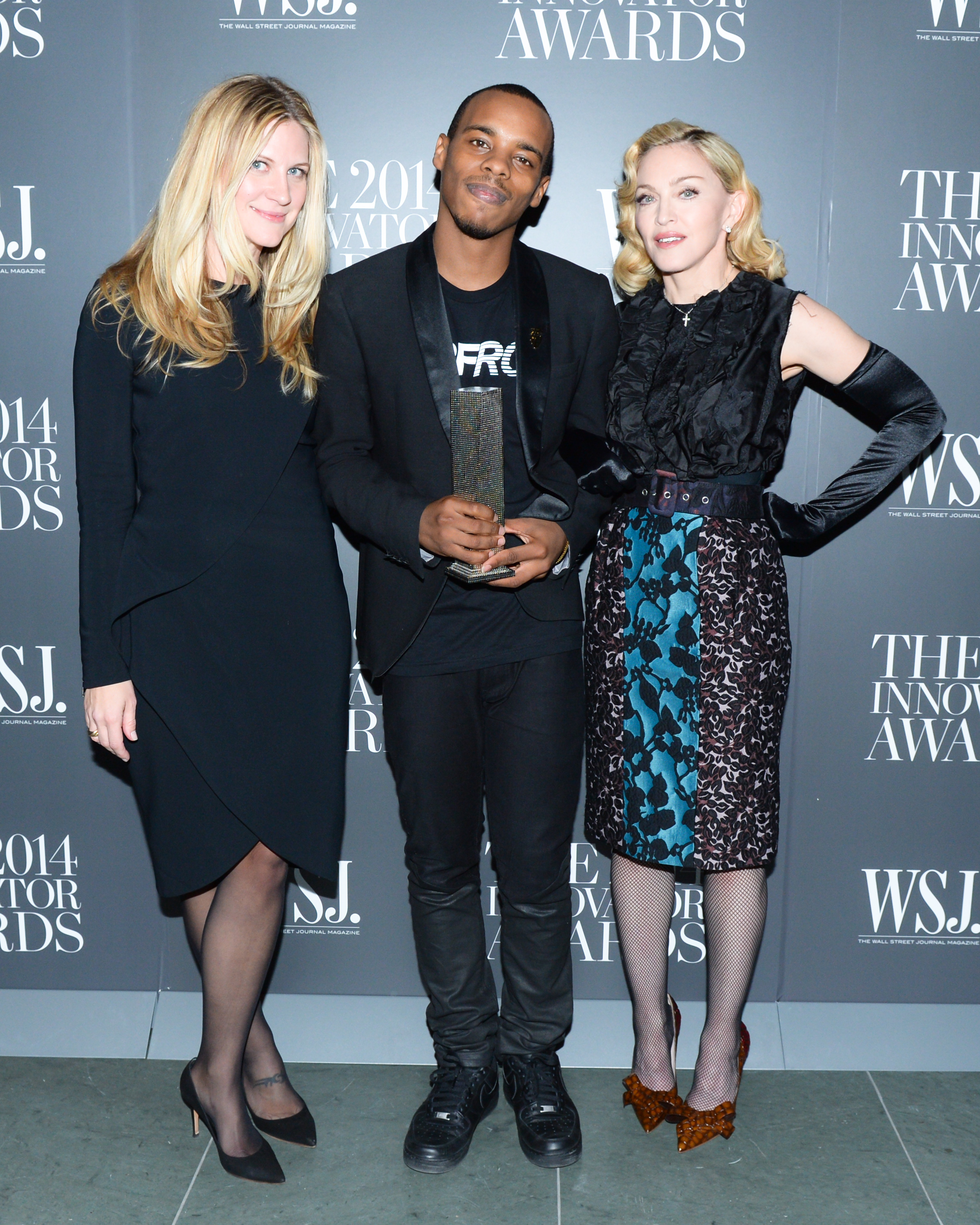 “How about Madonna?” Calvin Klein’s Francisco Costa predicted as a possible superstar cameo as he walked into last night’s WSJ. Innovator Awards at the MoMA. The guest list may have been shrouded in secrecy, but the resulting crowd was nothing short of epic. Not-so-surprise guests featured in WSJ.‘s just-released annual Innovators issue were honored, and there were some truly surprising appearances by the likes of Eminem, and, yes, The Queen of Pop herself.

Eminem paid homage to Interscope Record’s Jimmy Iovine and Dr. Dre, the later of whom he wittily referred to as his “primary care physician.” “As an example of how powerful [Iovine and Dre] are, they got me to fly here all the way from Detroit to speak publicly—and I really hate public speaking,” Eminem said during his speech honoring the duo. “This really makes me nervous. My palms are sweaty, my knees are weak…you know, that whole thing.” The rapper then made a swift and early exit.

Madge, on the other hand, was in no mood to leave after she was called to honor her famed backup dancer, Lil Buck, who stars on the magazine’s cover, leaping next to Joan Smalls. “Thank God there’s only one Lil Buck, because the dude shows up at my house all the time uninvited for dinner,” Madonna told the crowd. “I do find it a little strange that I’m making this speech and giving an award to someone I consider my little brother. After all, Buck, you’re still a baby in many ways, but a talented baby. The fact that you have worked with the likes of Yo Yo Ma, Cirque du Soleil, The New York City Ballet, and, um, me?  It’s pretty impressive, to say the least.” After accepting his award, the dancer then delighted the crowd with some of his signature moves that were first made famous by a cell phone video recored by Spike Jonze.

Louis Vuitton’s Nicolas Ghesquiere went home with an award for his design prowess, presented to him by BFF Jennifer Connelly. “This award arrived at a very special time in my career, and I take it as a great omen, so thank you,” Ghesquiere said. “One year ago I was walking through the doors of Louis Vuitton, and one year later, on this exact day, I’m here with you to share this moment as a wonderful anniversary.” The designer then carried on upstairs to MoMA’s 6th floor (which was well stocked for the evening with vintage Glenfiddich) where he and Grace Coddington walked through the museum’s new exhibit of Henri Matisse cut-outs (on display until February 2015) with a coterie of Francophile friends, including Marie-Amelie Sauve. In the fiscal spirit of WSJ.‘s parent paper, we asked Coddington if she had any favorite stocks in her portfolio. “Stock of clothes or money? Money? Oh, no, I don’t. Maybe I should. Maybe you could advise me.”

“I didn’t think we could top Gisele and Daft Punk from last year!” WSJ.’s EIC Kristina O’Neill told The Daily as the evening wrapped up. “I’ve been telling everyone that I’m already starting to plan next year’s issue tomorrow, just so everyone knows the amount of thought and consideration that goes into the event. We’ll see what’s in store for next year, though. I hope there’s a lot of groundbreaking, idea-making, inspiring talents who rock our world in 2015.”

Dior Hosts A Pre-Party For The 2014 Guggenheim International Gala