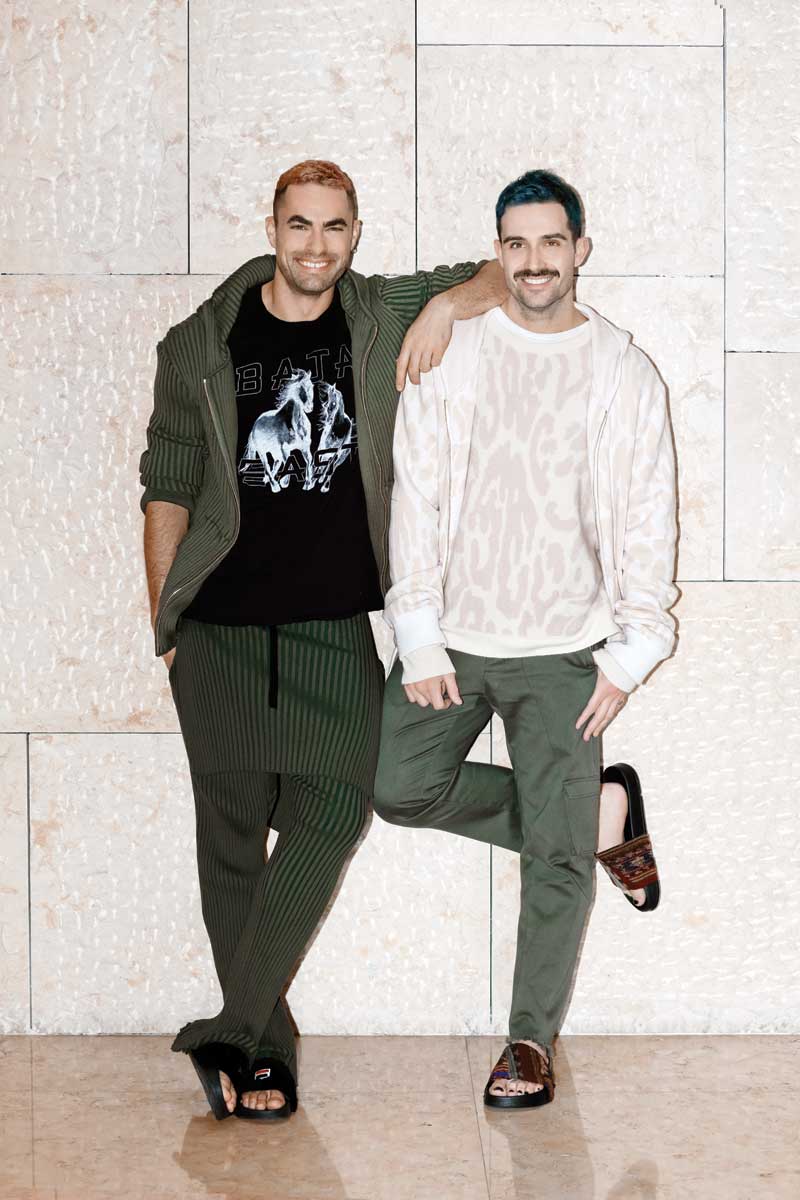 With its distinctly West Coast aesthetic, New York City-based brand Baja East has emerged as the go-to for cool kids across the country. Designers and best friends Scott Studenberg and John Targon, who count Lady Gaga, Miguel, and Solange Knowles as fans, have their strategy for world domination all figured out.

How did you meet?
Scott Studenberg: We met and became friends working out at an Equinox abs class in New York—we’d go get Mexican food afterward. We were around 19 or 20 years old, so we were obviously underage drinking and could eat anything.

Why are you mistaken for West Coasters?
Scott: We’re so relaxed! [Laughs] We just bring the sun wherever we go.
John: The name Baja does originate from that vibe; that is a part of what we do. Until the last two seasons, our collection was full of blues and bright, happy, ocean-y vibes. We’ve taken it a bit more to the street with our color palette this season—a little earthy here and there—but it always feels very happy and bright.

How so?
John: We always wanted the collection to feel like a vacation, one where you don’t only dress for the beach—you could dress up our pieces for a cocktail party. It was the idea of relaxed luxury. You could be jet-set, take six or eight pieces, and fill your whole wardrobe with us.

Where did you get your start in the industry?
John: I went to Parsons; Scott went to FIT.
Scott: I worked at [Manhattan restaurant] Bond Street for more than three years as lounge manager. I was also in school, but I hated it. I just wanted to work. I would take side jobs. I worked in production, casting, styling. I tried everything. Then I worked at W magazine, as the assistant bookings editor, and I was women’s wholesale director at Lanvin.

You live together and you share your work space in your apartment. Are you on top of each other 24/7?
Scott: Yes, unless we’re not. If I’m on a date with someone, John’s not there.
John: All our friends ultimately overlap, but we also have different friends we each go out with on our own. We didn’t have a budget when we first started, so when we traveled, we shared a room, a bed.

We understand you rarely fight…
Scott: Well, that’s not true.
John: But our fights never last.

What kind of chemistry do you have?
Scott: We both bring a very different aesthetic. I’m more of a maximalist. We know what to fight for, but we also have to move this along, because we both want the best for what we’re doing. It’s a process, but we definitely fill each other’s voids.
John: We’re not afraid to do anything. On some days, Scott is doing more press and I’m doing more finances, but neither of us is afraid to roll up our sleeves and get something done. We’re the same ones carrying out the FedEx boxes.

When did you start to experience success?
John: From our initial launch, we felt really fortunate—so many of the world’s best stores picked us up. We haven’t taken one thing for granted—we always feel grateful and in touch with what’s happening around us.
Scott: A month after our launch, Vogue magazine featured us. We’ve had the support of press and retail from the very beginning.

You describe your brand as “gender obsolescent.” Meaning…
Scott: When we were developing our brand and coming up with our own samples to wear out, I would have my Lanvin sneakers on and a python pair of shorts, and wear a Moroccan Jalaba that I had cut in half, and tucked it in to my shorts. Guys and girls alike wanted to wear that look. We were like, “Why does this have to be men’s or women’s?” Anything that you see on a guy in our collection can definitely go on a woman.
John: Our collection wasn’t androgynous.
Scott: Never androgynous, because when a woman puts on the clothes she looks feminine, and when a guy puts on the clothes he feels masculine.

Congrats on your emerging designer honor.
John: It feels pretty awesome. We are so proud. It’s an incredible honor. We’re stoked!
Scott: There’s no way we thought that Lady Gaga would be calling us to make her cashmere coats to the floor…and she would actually pay for them!

Who Was Best Dressed at the FLAs?

A Night To Remember! The Daily’s Fashion Los Angeles Awards