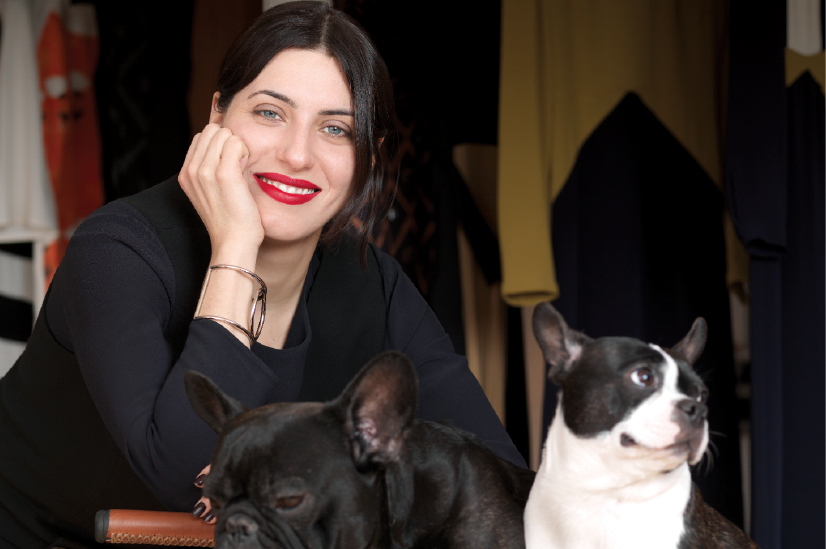 Giulietta’s Sofia Sizzi got her start at Gucci during the Tom Ford era before making her way stateside to work for American icons such as Donna Karan and Calvin Klein Collection. When she ventured out on her own for Fall 2011, retailers like Barneys immediately took note. Now thanks to a new partnership with Italian factory Cieffe Srl and a new line of shoes, Giulietta is about to really take off.

When did you get into fashion?
When I was 4 years old. My mother was a little shocked, because I literally obsessed over things. She was like, “I don’t know where you get this from, but I hope it goes away!” If I found a pair of shoes I loved, I would buy them even if they were too small. My first fashion crush was Yves Saint Laurent.

Did you study design?
I went to school for shoe design, and the school organized a design contest with Gucci. I ended up winning the first prize for shoes, so I got a piece of Gucci luggage and an internship in product development. This was when Tom Ford was at Gucci; there were no interns allowed in the design department. After six months, I was hired.

Chic! Did you ever come into contact with Tom Ford?
I don’t know if he ever acknowledged my existence! I was 21 years old. I would be in meetings with him in London, and I was petrified and charmed at the same time. He is so handsome, and he has an amazing personality.

How did you make the move to NYC?
A friend knew someone who was looking for an assistant designer. I ended up at Donna Karan, working under the creative director and a senior designer. At some point, they put me onto DKNY, because my boss left to get married.

How did you land at Calvin Klein?
I knew Francisco Costa from the Gucci days—he was designing womenswear. The position at the time was in handbags. Eventually, I was also doing men’s and women’s shoes and accessories. But in my mind, I’ve always loved the idea of a full collection rather than individual pieces. I have a very classic vision about it with a muse, the spirit, the mood, and what the woman is doing and where she is going.

Why did you leave?
I was burned out. It wasn’t anybody’s fault. It just happens at times in your life, especially if you work in fashion. I told my husband [restaurateur Iacopo Falai], “Honey, I’m going to be your director of operations at the restaurant!” He was like, “Oh, boy…” He was really scared! I was all corporate and fashion about it, and they were like, “Who is this woman? We have to prepare lunch now.” But no, food and restaurants aren’t for me. Doing the interiors is fun, but as for the food…no. So I freelanced for Michael Kors, Marc by Marc Jacobs, Jason Wu, and Donna Karan again.

When did you launch the collection?
In 2011. I didn’t have specific timing—I was just making and remaking pieces until I got them exactly how I wanted them. I wanted a very specific silhouette. I’m very inspired by the ’60s—specifically, 1968 and 1969.

At what point did you feel it was gaining momentum?
Right from the start, the curiosity was there. The press is really open to new designers. The first interview I ever did was with The New York Times. Then I met with Mark [Lee] and Daniella [Vitale] from Barneys, who immediately picked up the first season. Then Net-A-Porter did a story on me and bought the collection.

What challenges did you face?
I started with absolutely no funds. All I had was what I was making from my freelance jobs; that was my first reality check. After those retailers picked me up, I was faced with how much it was going to actually cost me to produce this collection. That phase finally ended after three years of killing myself.

How were you able to transition into a new phase?
We just signed a new partnership with Cieffe [Srl]. I’m so happy. There are only so many ways you can bring your collection to the next level. They manufacture for some of the best brands in the industry. They had been producing my collection for a year and a half and then they said, “We are considering investing into your collection. We can really bring it to the next level.” They also took over distribution, which was always a nightmare for me.

What else have you launched?
Shoes! It’s a big milestone, because shoes are really my thing.

How would you describe your aesthetic?
The Giulietta aesthetic is feminine, a little nostalgic, but also modern. The inspiration usually comes from Europe, my travels, or the old movies I’ve seen.

What is your inspiration this season?
It’s from a movie I love, Bernardo Bertolucci’s The Conformist. It’s one of my favorite movies ever, and it gave me so many elements to work with.

What new elements have you added under Cieffe?
There is more of a technological exploration this season. We started using more high-tech sport elements and fabrics, and we’re going to continue it this season. But this season I think it’s going to be really strong because it will be mixed with more glamorous, romantic elements.

Who are your muses?
Women between 65 and 80 years old! Monica Vitti is probably my No. 1, but also Romy Schneider, Charlotte Rampling, and Sophia Loren.

Dreams for the future?
I would like Giulietta to exist, and in order for it to exist, it has to be relevant. And in order for it to be relevant, there are steps that a company has to go through. The first would be to grow the sales and then focus on marketing. I’d love to have ad campaigns. That’s the time to really identify the brand’s image. And of course, I’d love to have a store.

What are your passions outside of work?
Music, art, architecture, and interiors. If I wasn’t doing fashion, I would be doing interiors.