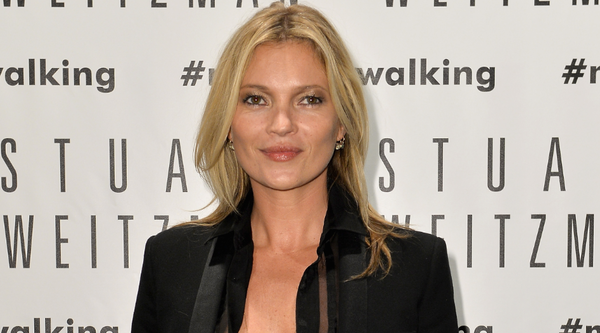 (MILAN) Yesterday evening, shoe impresario Stuart Weitzman threw the fashion fête of the evening for his new store on the ultra chic via Sant’ Andrea. The big bash debuted the Zaha Hadid-designed shoe haven, which will house the famous footwear in Hadid’s signature curvy modern architecture. Plus, Kate Moss made a much anticipated appearance to celebrate her new campaign, which has been making quite splash for the brand. How anticipated was her arrival? So much so that the petite 5’7″ supermodel was practically mobbed upon arrival. We still can’t get enough of her!

According to Weitzman, having Moss be the face of the campaign has brought a new element to the brand, elevating its “cool” status. “We have a huge business, but the cool element that she’s brought to 15 or so of our styles—it’s not the whole line, obviously—but it brings credibility and it’s selling and all the stores are buying it,” said Weitzman. We’re personally lusting over the tall black over-the-knee boots she’s wearing in the campaign.

As for the store, we asked Weitzman what it took to get the in demand architect du moment on board and apparently it didn’t take too much convincing. How did he sell her on the project? “This is a small project for them, as you can imagine. But she’s a woman and she loves shoes,” said Weitzman. I said, ‘Wouldn’t you want women to be able to shop in the most beautiful setting like the museums you build for beautiful art?’ and she said, ‘That’s and interesting thought. Let me think about it.’ Well, it didn’t take long.” And if you have the good fortune of being in Milan and stopping by, you’ll be sold, too.

An array of shoes displayed beneath grey curvy ceilings made it feel as though you were in something more than your average storefront. The party eventually opened up into a garden courtyard, where a huge projector screen debuted Moss’ new campaign video, “Made for Walking” as guests sipped on cocktails at a bar that spanned one entire side of the garden. No waiting in line for a libation here! Meanwhile, a giant shoe-shaped topiary stood its ground on the other side. We spotted Anna Dello Russo checking out the new space and Olivia Palermo chatting up Mr. Weitzman al fresco. Plus, there were a slew of Italian celebs like actress and singer Laura Chiatti, designer Luisa Beccaria, and mod Mary Charteris, to name a few (guess the latter isn’t in a feud with Kate after all). As for us, we saw plenty of shoes we wanted to walk out with, but perhaps we’ll wait ’til the end of the mad Milan Fashion Week dash.
PAIGE REDDINGER