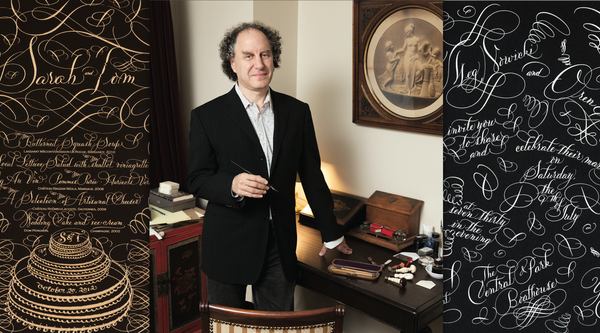 (NEW YORK) An encore treat from The Daily Brides, for all you stationery savants out there…Big-budget brides who want the chicest handwriting around ring up calligrapher extraordinaire Bernard Maisner. He gave us the inside line on his elaborate feats of penmanship!
BY ALEXANDRA ILYASHOV

When did calligraphy first pique your interest?
I’d always loved painting, and in 11th grade a school group asked me to design a certificate. I didn’t really know calligraphy, but I followed some book, and when my father saw it, he thought it was amazing. He got me materials and told me to start practicing.

Were you a natural?
No. In retrospect, I was a very bad calligrapher at first. It took me many years to get better.

Who were your earliest clients?
In high school I’d examine local store signs, copy down all of the information, and come back the next day to sell my sign to them. I’d say, “The sign in your window isn’t as beautiful as what’s in your store. For $5, you can have this sign!”

Clever! How did you hone your craft?
I went to Cooper Union, and met the calligrapher teacher. He said he’d never met anyone that learned so much on his own, but he still put me in beginner’s calligraphy. It was the best thing he could have ever done for me.

How did you end up doing this full-time?
When I graduated from Cooper Union, I needed to make a living. The day after I graduated my next-door neighbor got a call from someone at a corporation asking him if he could do calligraphy for some names on place cards. Next thing I knew, I was doing hundreds of names on place cards at a dollar a name. Back then, my rent was $100 a month, which I could make in two hours! My traditional calligraphy gave way to creative calligraphy, for advertising campaigns, publishing companies, and record albums. I did that for 25 years.

Who were some of your clients?
I worked with Ralph Lauren, Ann Taylor, Valentino, Zac Posen, Peter Som, Macy’s—lots of people. I also did the logo for Spiegel, an ad campaign for Coca Cola, the lettering for Whitney Houston’s album, and an ad campaign for AT&T.

Then you got into stationery. When did that business take off?
Fifteen years ago, as the computer began to take over the world and fonts could suddenly be created cheaply, people began copying the types of lettering that I’d been doing for decades, making it available for $50. If a magazine has the choice to spend $50 or $500 to create a headline, they choose the cheaper option. My business was cut in half because of the new technologies. Suddenly, social stationery began to interest me.

What was the stationery biz like when you first came on the scene?
Everyone was more traditional and limited in what they were offering. You couldn’t tell one calligrapher from another. I worked for about two years to develop a calligraphy style based on tradition, but branched out a bit. I have a wild bent from being a painter, I guess.

How do clients typically find you?
Most of my clients come through word of mouth. I found a very strong, loving audience that’s become almost cultish. When I started, though, it was difficult. I had fewer samples to show people. Some business was just based on faith! Clients now call because they’re familiar with, and predisposed to, my kind of work. But I’ve never been a salesman. I can’t give a sales pitch.

What’s the process like?
It is about a three-month process. First I sit on the sofa in my New York studio and go through my portfolio with the couple. There’s no chart or menu to choose from. My goal is to create something unique. After all of the calligraphy is done, it goes into my computer, and into the design stage, which takes much longer than the calligraphy itself.

Got any side projects?
My retail line of stationery started 10 years ago, carried at Bergdorf Goodman. They’ve given me a window on Fifth Avenue! I also was in the windows at Tiffany’s in 2006. They featured my work on lampshades and umbrellas.

Anything else you’ve done off the page?
I recently paired up with Julia B to do embroidered calligraphic designs and styles on linens. Once, a man custom-ordered a bannister for his house with my flourishings in cast iron.

When are you most in-demand?
It’s very consistent. The only time I get a day off is between Christmas and New Year’s! I work literally 18 hours a day.

Will calligraphy ever go out of style?
I hope it lasts simply as long as I am alive. It’d really be a shame if writing and calligraphy disappeared completely, but we are definitely on that trajectory. People don’t even know how to hold a pencil properly nowadays.

What’s your penmanship like when you’re off duty?
Messy! When I jot down a note, it’s almost illegible. It’s a big mess.

Bubbles And Baubles With The CFDA