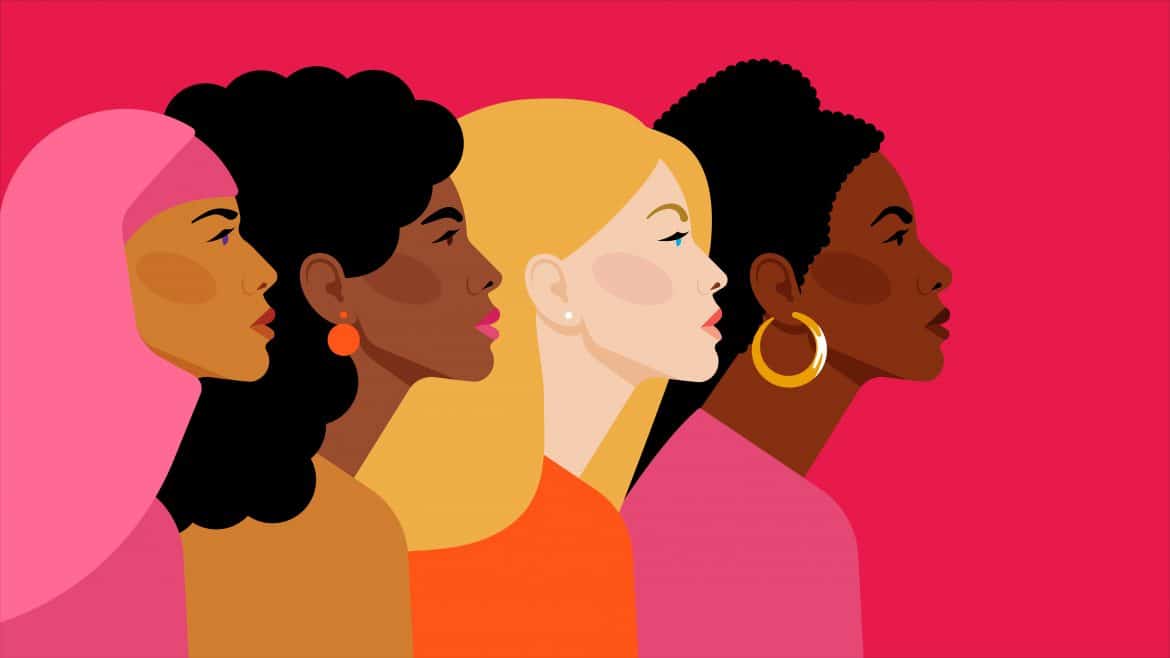 A slew of beauty companies announced various donations and initiatives in support of the Black Lives Movement. In fact, there’s so many we’ve featured them on our site all this week. Here’s the second round of charitable brands – J to Z – and what they’re doing to contribute to the cause.

Josie Maran Cosmetics: The clean beauty brand has donated $50,000 to The Loveland Foundation. It has also signed the Aurora James’s 15 Percent Pledge, committing to ensuring that at least 15% of the talent it features moving forward is from the black community.

Moroccanoil: The haircare company announced that it will be making a donation to the NAACP adding that in addition to that it will continue its “commitment across the company to ongoing, impactful education surrounding racial bias and how we can overcome it.” 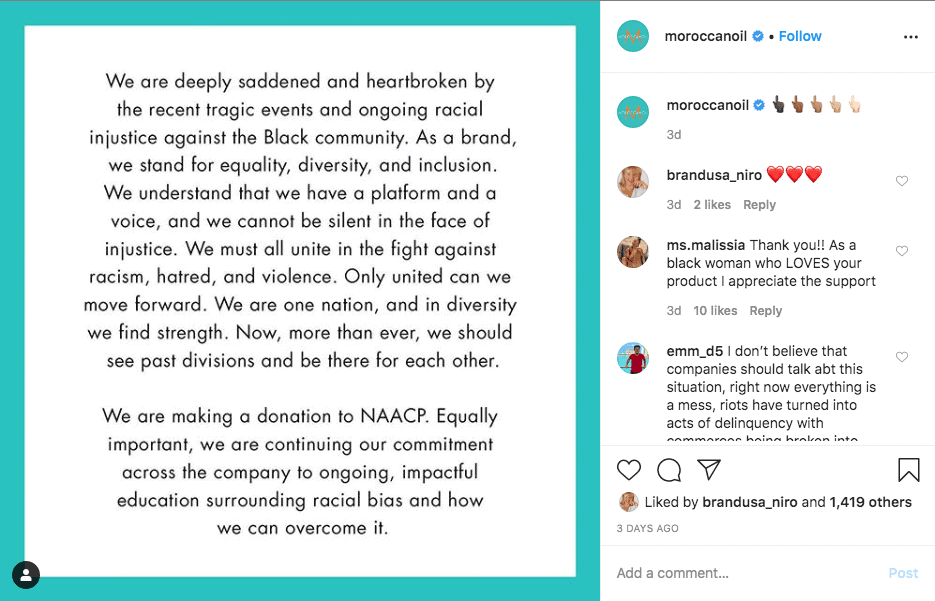 Ren: Making a donation to Black Lives Matter, the skin care line said, “It is not about staying silent. ⁣
It’s about using our voice to make change.⁣ We refuse to accept that things can’t be changed.⁣”

Savage x Fenty: Rihanna’s beauty line asked fans to #PullUp on Instagram while announcing it will be giving funds to The Bail Project and the Black Lives Matter Coalition of Greater New York.

SheaMoisture: Via a press release, the hair and skin care line said it will be using $100,000 to create a social justice coalition which will support five activists giving them $20,000 grants.

Soko Glam: The skin care line has made a donation to Black Lives Matter adding, “[we] encourage you to research organizations and support where possible.” It suggested several groups including Color of Change and the Minnesota Freedom Fund.

Space NK: The luxury beauty retailer donated to the Black Lives Matter organization saying, “We stand with George Floyd and those that have lost their lives unjustly. Racism has no place in this world and we are using our platform, like many others to speak out and take action.”

Summer Fridays: The skin care line has made donations to Black Lives Matter and the Minnesota Freedom Fund. “We need to do better. Educate yourselves, even if it’s uncomfortable. Sign a petition. Make a call. Donate if you can.” The company also shared education resources on its Instagram account. 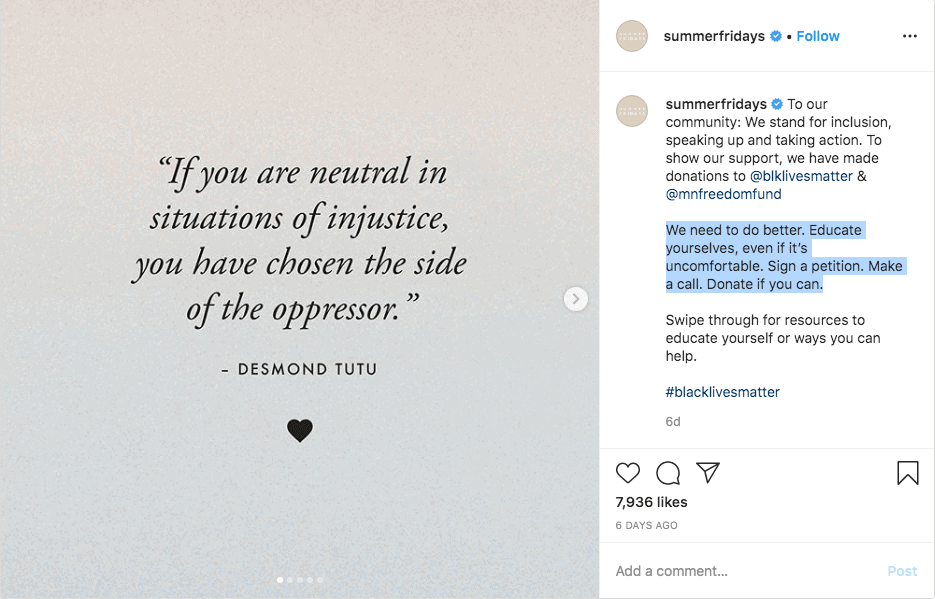 Sunday Riley: Founder Sunday Riley shared a personal message noting that she and George Floyd attended the same high school in Houston. “We had entirely different lives, different opportunities, and faced different challenges.  Had we both been in the exact same situation, at the exact same moment, I think it would have ended differently for me. Actually, I know it would have. That reality pierces me to my core.” The company made a $50,000 donation to the NAACP’s Legal Defense and Education Fund.

Supernal: In addition to donating an undisclosed amount to the NAACP, the company urged followers to “text FLOYD to 55156, and also sign the @changedotorg petition supporting #JusticeforFloyd.” It also listed several other organizations like the Southern Poverty Law Center and I Run with Maud that people can support.

Tarte Cosmetics: “We need to do better. As a company. As colleagues. As neighbors. As friends. As a society. We’re working to educate ourselves & others.” The makeup line is making a donation to the NAACP but didn’t disclose the exact amount.

Tata Harper: Five different organizations received donations from the company including the Equal Justice Initiative, Emergency Release Fund, NAACP, Black Lives Matter, and Color of Change. Via an Instagram post, it also encouraged others to donate using a link in its bio. 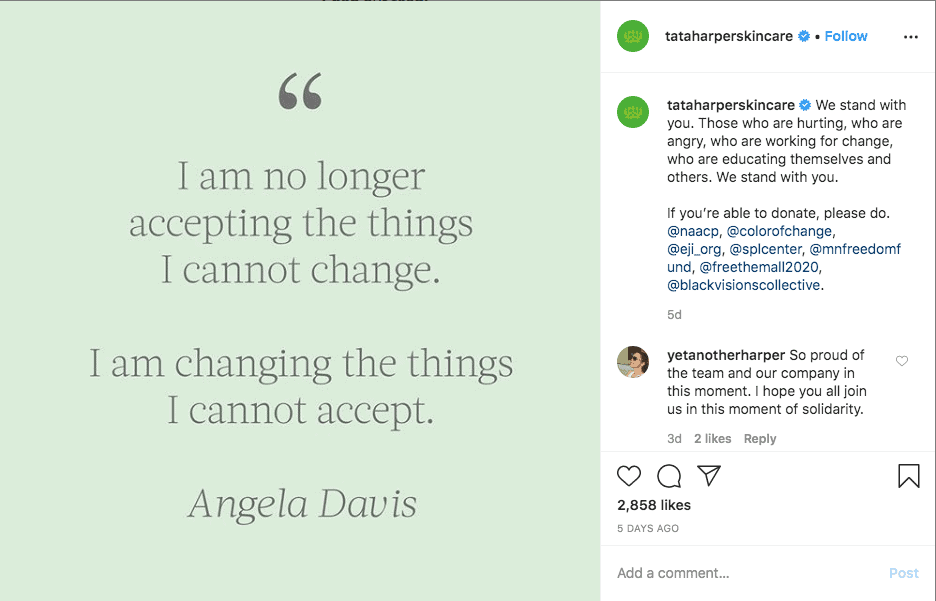 Tower 28: On Tuesday, the company announced that it has donated funds to the NAACP, ACLU, Black Lives Matter, and Campaign Zero. It also said, “Our team is taking time off from work tomorrow to educate ourselves and our families about racial inequality. Time to talk to our children, read a book, listen to a podcast and ultimately be an active part of the solution instead of complicit bystanders. So instead of working on the next PR box or the newest shade of lip jelly, we’ll be taking time out to educate ourselves and understand what we can do.”

Urban Decay: On its Instagram account featuring an image saying, “Silence is not an option. Speak up,” the makeup line shared that it made donations to the Minnesota Freedom Fund and to Black Lives Matter.

Ulta Beauty: While it didn’t disclose the amount, the beauty retailer is making a donation to the Equal Justice Initiative. “Lately, we’ve been encouraging you to see the beauty that’s around us. But there are moments to see the pain around us, too. In light of what’s happened this past week, it doesn’t feel right to go about business as usual. What does feel right is to stand in solidarity with those who are hurting in our community.” 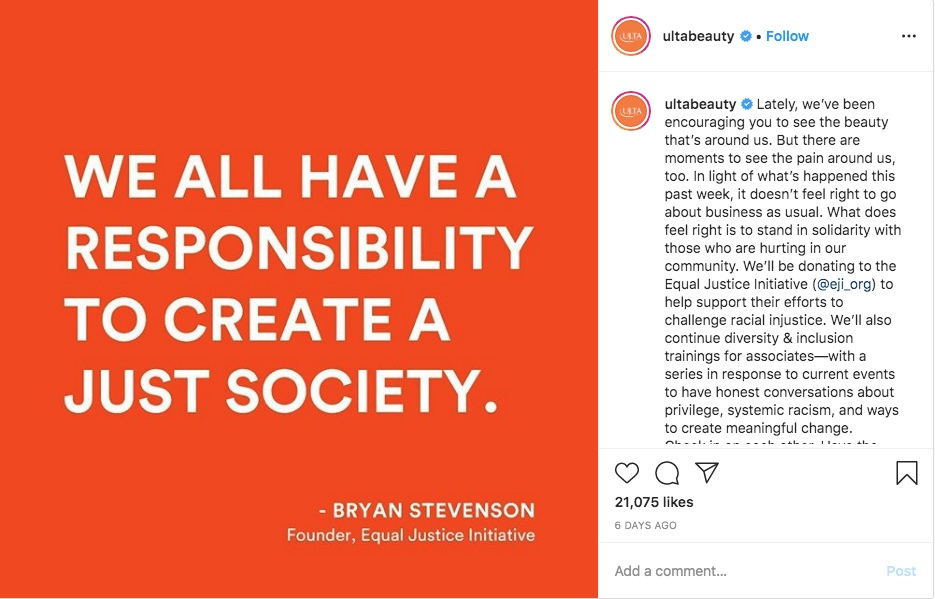 Vernon Francois: Throughout June 35% of sales from the website will be donated to “support the tireless work of some key grassroots organizations that are dedicated to the fight of racism and injustice.”

Versed: The skincare line is donating to the ACLU and also urged its followers to, “Do your research and tackle your own belief system, uplift black voices, talk to family members and friends who may not want to speak up. Now is not the time to sit back. It’s okay to not have it all figured out, take the steps needed to make our communities safe and fair.”

Vesca: The beauty brand is making donations to Reclaim the Block, Black Visions Collective, and the George Floyd Memorial Fund. “At Vesca, we aim to pave the way for inclusivity, diversity and transparency and in these times more than others, it is important for us to use our platform and speak up about these issues.