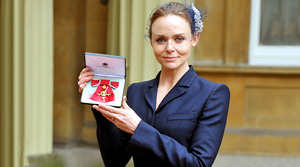 If this doesn’t prove that she’s totally out of her father’s shadow, nothing will. Today in London Stella McCartney spent a little time at Buckingham Palace to receive an OBE from the Queen. The OBE is the Order of the British Empire award for British nationals or anyone who makes an impact for the U.K. Glenda Bailey, Sarah Burton, and Amanda Wakeley are former OBE recipients. McCartney wore a blue pencil skirt suit from her own collection. Congrats, love.