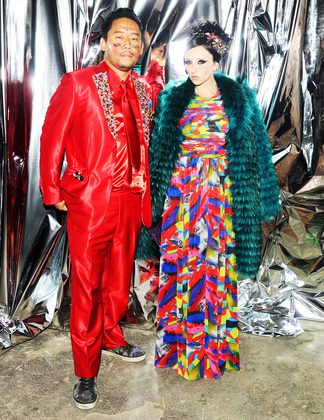 Alice + Olivia’s Stacey Bendet and renowned artist David Choe have teamed up for the launch of the Kindness Project. They’ve collaborated to create a capsule collection with the artist’s ‘A Women and a Monkey’ painting for A+O’s Spring collection. Last night they celebrated with a party with jams by Hannah Bronfman that brought out faces such as Zosia Mamet, Fiona Byrne, Athena Calderone, Selita Ebanks, Maxwell, and Alana Zimmer to get their disco on at 450 West 14th Street. Bendet filled us in on the kindness project, her fave disco tune, and a recent kind act in her life.

How do you and David know each other?
David and I met, and then I fell in love with him when he wore a black tutu in my office and let me take pictures of him in a tutu all over the Meatpacking in it. It was on his head, mind you. Then we became friends and I fell in love with his watercolor paintings. He’s known for his street art, but he is one of the most talented watercolor painters I’ve ever seen. When he showed me this image (check out our Gallery), I wanted to make it into a gown. He was like, “awesome!”. It’s so beautiful that I thought that instead of using this as a one off, I’d like to use it as a global image for my kindness project.

What’s the Kindness Project?
It’s Alice + Olivia’s global initiative to do positive and wonderful things for women around the world. David’s been helping all over the world, so he loved it. We decided to do this crazy collaboration. The party idea came because the dress is beaded all over, so it needed to be at a disco party.

What’s the kindest thing anybody has done for you lately?
My husband took my two-year-old daughter to the passport agency. Taking a two-year-old to a government office? I knew that was not going to go well. They finally got to the front of the line and she said, “Daddy, I have to go pee pee now!” There are no bathrooms in government offices so had to take her across the street to Penn Station. He had to go running across the street with this newly potty-trained two-year-old to find a bathroom. When they finally got there, she thought the bathroom was too dirty to use!

That’s hilarious!
Long story short, I think a husband willing to take his child to get her passport and then have to figure out how to take all her clothes off at a men’s bathroom in Penn Station wins a really kind award.

David Yurman Fills Us In On His...

David Yurman Fills Us In On His...