Splashing Around With Mumford & Sons 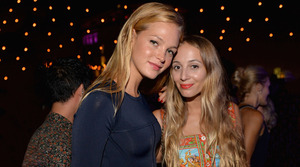 (NEW YORK) Mumford & Sons made a splash on the rooftop of the Soho House New York last eve for a 10-year celebration of the member’s only hotel. Quite the crowd showed up for this school night soiree, but when a rooftop pool is involved, who could refuse? Summer is almost at its end, after all. As Jenna Lyons oh-so-gracefully removed her blue stiletto, the heel of which was wedged between the floorboards, she filled us in on what she was like at age 10. ” I only wore purple, it was the only color in my wardrobe. Except for a giant Raggedy Ann belt buckle. But seriously, every other thing was purple. I had purple jeans, purple t-shirts, purple shoes.”

Carey Mulligan and co. staked out a spot next to the stage, drinking in an unobstructed view of her hubby Marcus Mumford as he and his boys performed directly in front of the pool. Were people swimming? You bet, and a few even dove in fully dressed. Revelers over at the Gansevoort peered over their rooftop to get a taste of the action, and were hopefully able to catch John Legend‘s impromptu performance. Harley Viera Newton, Timo Weiland, Wes Gordon, Thakoon, Richard Chai, Jennifer Fisher, and Erin Heatherton were amongst the crowd who took in the two-hour performance, also nabbing a few Dirty Burgers to nosh on. Actress Jennifer Connelly and her choppy bob were even on board, although even an actress of her caliber wasn’t safe from the doting bathroom attendant’s scolding remarks for taking too long. Gotta love the Soho House for keepin’ it real!
DENA SILVER