Spike Lee's 'Oldboy' Brings All The Boys (And Girls) Out 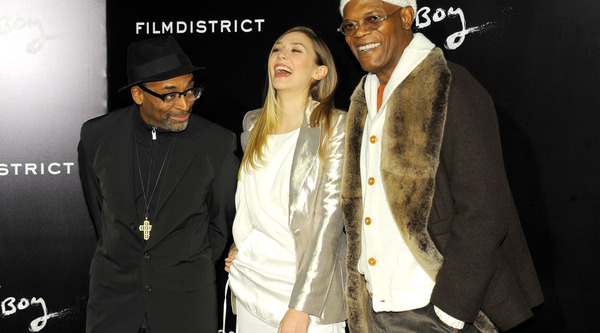 (NEW YORK) Last night Complex Media, The Cinema Society, and Grey Goose hosted a screening at the AMC Loewe’s Theater near Lincoln Center for FilmDistrict’s Oldboy directed by two-time Academy Award-winning director Spike Lee. The film, which is a reinterpretation of the original 2003 Korean version of the same name, stars Josh Brolin as a down-and-out advertising exec and absentee father who finds himself imprisoned in a hotel room after a night of binge drinking. Brolin’s character, Joe Doucett, spends the next 20 years locked away in solitary confinement for reasons unknown to him until one day he’s mysteriously released into a field. But as he seeks to find answers and a motive for the torture he endured, he finds himself further engulfed in a tangled conspiracy that leads him to seek answers from a young social worker played by Elizabeth Olsen and a mysterious and elusive old man, played by Sharlto Copley, who allegedly can set him truly free.

The grueling scenes with Brolin were reportedly filmed chronologically to get the most out of his performance. “That’s the best way to do it,” said Lee. “It’s a lot easier.” Brolin also had to endure quick weight loss during the shoot. “He was on a strict diet supervised by dieticians,” said Lee. “It was predominately water weight, but he had to lose it all in one weekend.” Pom Klementieff, who plays a villain in the film and has a fight scene with Brolin, also underwent grueling workout prep; the stuntmen nicknamed her “the pominator”. “For my training, I was boxing in Paris and during the shoot I did martial arts lessons for three hours a day for two months,” said Klementieff. “I was sore everyday and lost a toenail after the shoot wrapped…yeah, after. That’s how professional I am!” But it wasn’t always difficult. “The darker the material, the lighter the energy on set,” said Olsen (who was decked out in Altuzarra for the premiere). “We just had a fun time. Spike [Lee] and Josh [Brolin] are amazing. I only had one scene with Samuel L. Jackson, but he’s hilarious. And I worked with Michael Imperioli, too. It was such a good group.”

While Brolin and Copley were absent from the screening, Spike Lee and screenwriter Mark Protosevich showed up to support the film alongside cast members Olsen, Jackson, Imperioli, James Ransone, Max Casella, Elvy Yost, Erik Gersovitz, Victoria Geil, and Klementieff, to name a few. Afterwards, the crew and guests like Pat Cleveland, Scott Lipps, June Ambrose, Garrett Neff, Raekwon, and Lily Kwong headed over to new nightlife hautespot Tao Downtown at the Maritime hotel to sip Grey Goose cocktails and party the night away. Oh boy, was it a night.
PAIGE REDDINGER