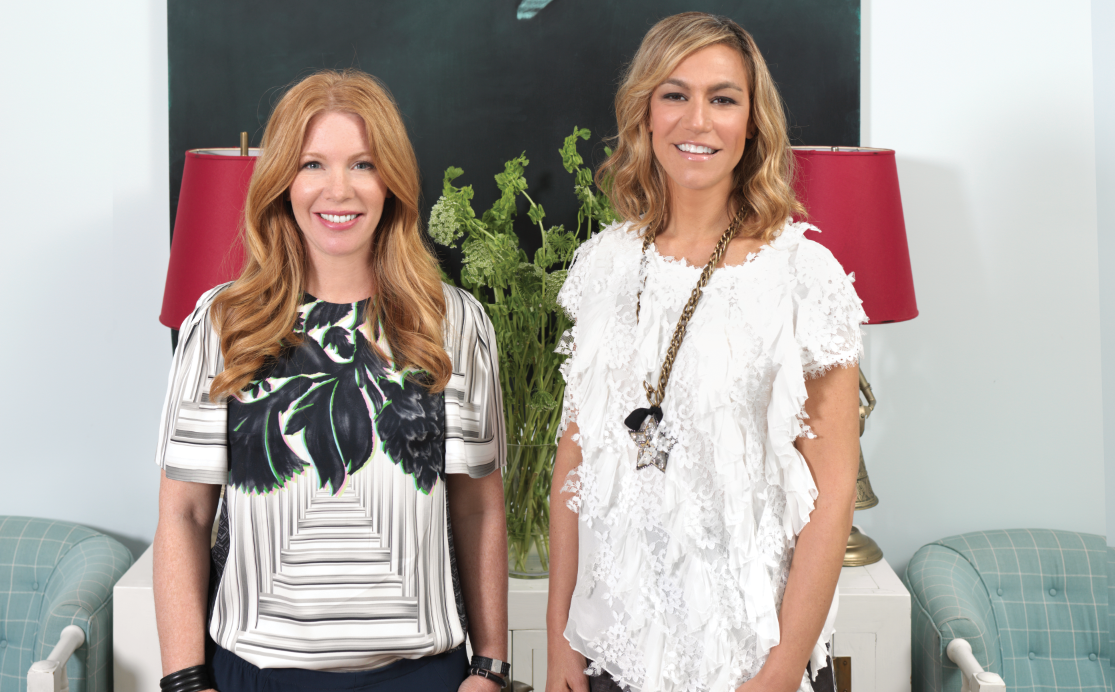 If you haven’t yet joined the cult of SoulCycle, well, you may be frequenting the wrong Fork. The souped-up cycling obsession’s Bridgehampton outpost, aka “The Barn”, was actually co-founders’ Elizabeth Cutler and Julie Rice’s sophomore location, even before their canary yellow signage popped up in every NYC ’hood. Now in its eighth summer season, SoulCycle has three Hamptons outposts and thousands of superfans. In Cutler’s lush East Hampton yard, she and Rice school us on all things Soul-ful.
BY ALEXANDRA ILYASHOV

How soon after launching SoulCycle did you invade the Hamptons?
Julie Rice: We’d been open for a year on West 72nd Street when we got a call from a friend saying there was a great location open in Bridgehampton. We certainly weren’t ready to open a second location! We were a very new business. But SoulCycle is about a lifestyle beyond the bike, so it felt synergistic—the Hamptons is about lifestyle, good health, and really enjoying yourself in the moment. It was definitely a risky move!

How did you build out the Barn?
Julie: At the time, we were a tiny group of people. It was all crew on deck.
Elizabeth Cutler: I was painting the bathroom.
Julie: Every 45 minutes we would call someone in the city and tell them to bring something—wall decals, window shades—out on the Jitney. I think by 2 p.m. there was nobody we knew in the city left. It was really a labor of love. The Barn became SoulCycle’s crown jewel.

Why did the space feel right?
Elizabeth: It’s a special place, so rustic and open-air. It’s an old potato barn that used to be located much closer to the ocean; it was moved up probably 30 years ago. It’s got a great fitness pedigree—the Lotte Berk Method used to be there.
Julie: SoulCycle is so community-based, and the Barn puts that on steroids. All of a sudden, busy New Yorkers have an extra 20 minutes to stay and chat.

Why did the Hamptons need SoulCycle?
Julie: A few studios had been out here for a long time, but nobody was disrupting the Hamptons fitness scene or making it social. We’ve seen things pop up after us, but we definitely paved the way.

What prompted you to open other East End outposts?
Julie: The wait lists were getting crazy. It went from being this amazing experience that everyone wanted, to not being able to get in. We tried to find more space at the Barn, but that wasn’t going to happen.

Why did you pick East Hampton and Water Mill?
Elizabeth: We opened in East Hampton in 2011. Our business was very strong; we had double-digit growth during the recession. At the time, Julie was having her second child; I had three kids. My husband was like, “I swear to God, I don’t know what I am going to do if you don’t do this [location]. It’s so close to our house.” Last summer, we opened a location for the Water Mill crowd.

Anything new at your Hamptons locations?
Julie: We’re doing Soul Summer Body in the basement of our East Hampton studio. It’s a rotation of different add-ons to SoulCycle classes—a personal training type of thing.

Your superstar instructors, like Stacey and Rique, tend to teach out East.
Julie: We try to mix it up, so you’ll find a fantastic newbie teaching alongside a master. We really do try to put names in a hat, shake it up, and see what happens, but there are definitely names like Stacey who’ve been teaching since we opened the Barn’s doors.

Is there a SoulCycle staffer pad?
Julie: When we opened out East, we realized that we had to bring the people we’d trained to do it, so we decided to rent a house. It’s become Camp SoulCycle with bonding and barbecues!
Elizabeth: It’s a big commitment on our part—now, we have, like, 16 rental cars and three houses.
Julie: All jokes aside, camp is really how Elizabeth and I run our business. It’s important to continuously bond, work together, and play together.

Let’s discuss this gorgeous house, Elizabeth. How long have you had it?
Elizabeth: I’ve been here for 15 years. Right before my husband and I got married, we came out for the weekend and we looked at houses. This was the second house that we saw. I didn’t want guests to feel stuck—they can walk into town, and just have their own Hamptons experience.

Where can we find you and the fam, besides SoulCycle?
Elizabeth: My husband is a big boater, so we’re out on the water, surfing and stuff. And I love the idea of farm-to-table. I go to farm stands, Red Horse Market for fresh mozzarella, East Hampton Gourmet, and Cavaniola’s Cheese Shop in Sag Harbor.

Do you go out East a lot as well, Julie?
Julie: Off and on. I come out here for holidays, and I spend three weeks in the summer. Elizabeth and I will eat dinner together on the beach with our families, and ultimately our girls will burst into some type of a talent show.

Do you two hang out at the Barn much?
Julie: We used to spend more time here at the front desk, so we could understand what people really wanted. These days, we’re working gals with a real office and real desks, which we certainly didn’t have eight years ago. But on summer weekends, you can definitely find us riding at a studio each morning.

Do riders geek out over being in a class with a SoulCycle co-founder?
Julie: People are always excited to see us—they always have something tucked away that they want to say: “Hey, I love that new teacher, thanks for upgrading the bathroom, we can use a 6 a.m. class at this studio…” We still work behind the front desk ourselves; we fold towels.

Do you have a least-favorite task?
Elizabeth: I don’t even mind spraying shoes.

Have your kids tried SoulCycle yet?
Julie: Yes, they love it. They’ve grown up with the business, and they have a lot of pride in it. In the beginning, our babysitters were also working at the front desk.
Elizabeth: I waited until my daughter was old enough to ride. You know how when you wait for something for such a long time, when it comes, you aren’t sure you want it anymore? That happened to my daughter. She’s been riding, but I’m not sure how much she likes it. My youngest one has been asking to ride, so I just lowered the handlebars and broke the rules. Turns out, she loves it—I’m impressed.

Let’s talk retail. What’s the deal with your threads?
Julie: When we first started, we had a few thousand dollars left after building our first studio. We created T-shirts to give to 100 of the coolest people we knew. One day, our wheel is going to be like the Nike [swoosh]—we won’t have to even put our name on it anymore, just our symbol with the word “Soul,” and people will just know what that is. That’s what we did, and people really loved it.
Elizabeth: We’ve kept our brand really clean. We don’t sell anything at our studios that wasn’t made or branded by us.
Julie: We now do 14 collections a year—one a month, one for holiday, and one for resort. Now our studios have become full-on retail stores—people who don’t ride will still come in and shop our collection.

Wait, really?
Julie: SoulCycle is what happens in the studio, and Soul is what happens when you put on our clothing! We’re actually getting ready to do a much bigger apparel line. We’re really well-positioned to become an apparel brand as well as a fitness brand.

Would that be carried at other stores?
Julie: We’re playing with that a bit. We aren’t ready to be a wholesale brand yet. We did our second collection with Shopbop recently, which was designed with the new Malibu studio in mind.

What’s up with that skull motif?
Elizabeth: When you get on the bike, you want to dig deep and the skull represents getting your most badass self on and bringing it so hard.
Julie: SoulCycle is not fluffy. You’re working hard. You leave feeling more enlightened than when you came in—and that’s not because it’s a light exercise.

Any dream fashion collaborators?
Julie: If Riccardo Tisci wants to do something with us, that would be a very natural pairing. And if Alexander Wang is listening, he would be perfect.

Any other locations in the works?
Elizabeth: We’re looking at other East Coast places that might be obvious, like Martha’s Vineyard. We’ll open in Coral Gables, Florida, and Northern California this winter, and we’re also doing something really cool in Orange County. We’re going to roll out Chicago in 2015, for sure. After that? London!