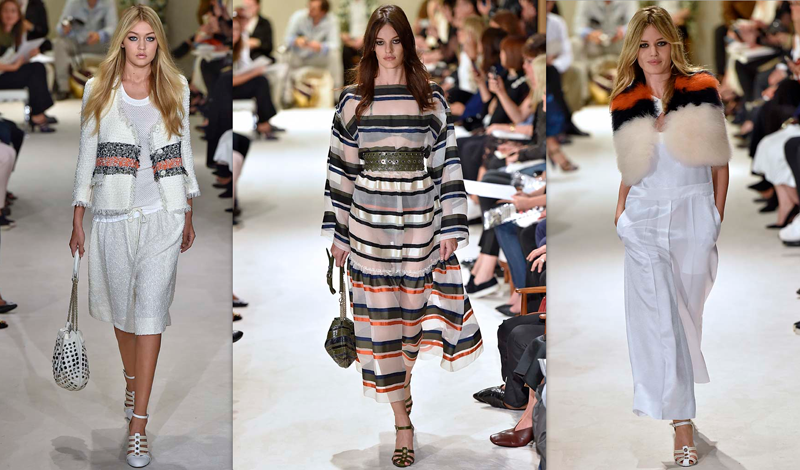 Some might say Sonia Rykiel been lacking a certain je ne sais quoi since its fiery, red headed founder stepped down from her helm in 2009. With the arrival of Julie de Libran as artistic director, the spark has certainly returned. The former Louis Vuitton womenswear studio director and alum of Prada and Versace turned out a parade of glamorous garb, a modern take on what Rykiel first set out to achieve when she started her namesake label in 1968. Rykiel got her start with knitwear, creating pieces she couldn’t find elsewhere. She’s also always had penchant for stripes. And de Libran delivered on both counts, sometimes subtly, like a white short suit with a striped weave, paired with a cool Breton-striped knit shirt. Louder looks included a totally sheer black dress offering a touch of coverage with a few knit ruffles. Another standout: an olive green jumpsuit with sparkly accents, topped off with a coordinating fur vest. Basic denim was spruced up to varying degrees. Fur was sprinkled throughout, quite casually: a striped shrug here, a chubby coat over a teeny pair of shorts there. Also packing a punch? The casting, which included Gigi Hadid, Kendall Jenner, Georgia May Jagger, Miranda Kerr, Joan Smalls, and Edie Campbell. In her show notes, the new artistic director said this was a homecoming of sorts for her. A chic home indeed!

It Girl Alert! Chatting Up Dylan Penn In Paris