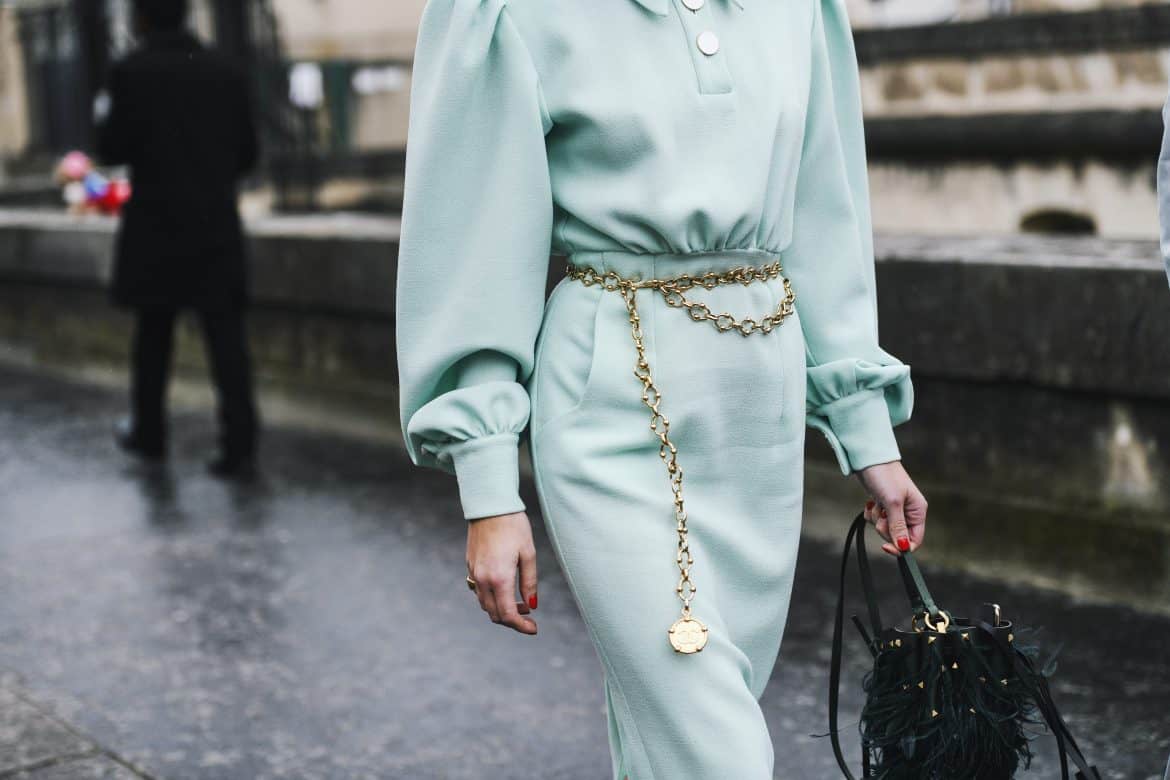 Patou
Patou presented its collection through a film directed by designer Guillaume Henry, which was made in the brand’s  headquarters in Ile de la Cité against a backdrop of the river Seine. Models strutted around a hall, full of empty chairs, wearing dresses with Juliet sleeves and a makeup look that highlighted the mouth. As they walked, actress Viviane Blassel described the looks via a voice over. The collection gave off a super-feminine vibe; we saw A-line dresses in lavender and floral, and pants with feathers. Necklines stood out because of their big volumes, and golden accessories perfectly completed every look. As did the sailor hats! According to Henry, this collection was inspired by his childhood in the ’80s—when his passion for fashion emerged—when he would spend his time designing exuberant dresses in his bedroom inspired by Christian Lacroix.

A why not! occasion for a Patou celebration. #Patou @GuillaumeMarcDamienHenry #LesFillesEnPatou #PFW #Paris

Dries Van Noten
Dries Van Noten created his Spring Summer collection, while confined in Amberes, via Zoom with his work team. For his online presentation, he chose Dutch photographer Viviane Sassen, who directed the photographic and film images. Models danced to the rhythm of techno music in front of the camera under colorful lights, which gave off a psychedelic vibe.

The collection, for both men and women, included shiny waterproof dresses, neon gauze blouses, gold jackets, vests with metallic rings, and rainbow swimsuits. All of the items were created in collaboration with the Len Lye Foundation, and the prints, like the sun and palm trees, were based off the work of the experimental New Zealand artist. All in all, it was an explosion of colors and textures faithful to the designer’s style.

Kenzo
Kenzo opened Paris Fashion Week’s third day at the enormous outdoor garden of the Institut National de Jeunes Sourds. Upon arrival, big black umbrellas were waiting for guests to shield us from the rain, and were strategically placed to respect the social distancing rules. A jar of honey was also given to everyone in attendance, including actress Chau Bui. The collection, titled “Bee a Tiger” was inspired by the insect, and the typical clothes worn by beekeepers such as protective hats. These were the most striking items! Big capes covered in tulle also floated by on every model, while the trademark poppies of the brand featured heavily. Since this year is the 20th anniversary of the fragrance Flower by Kenzo, it was very fitting. Furthermore, waterproof jackets and pants with plenty of pockets were a star item in the lineup. The sandals that completed the looks had geometric shapes and their soles had a beehive pattern, which matched with the concept created by Portuguese designer Felipe Oliveira Baptista.

Attention All Fashion Fans! Why Atlanta Apparel Should Be On Your Radar

For SS ’21, The Chloé Girl Is As Optimistic As Ever