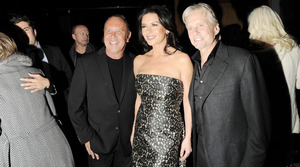 (NEW YORK) A Steven Soderbergh film will undoubtedly create a fuss, but the director’s purported last hurrah is cause for even more pandemonium. His plans? To paint. Although it’s probably not as lucrative, we suspect, thanks to all of those Ocean’s movies, he seems set in that department. As for the final flick, The Cinema Society and Michael Kors hosted a premiere for Open Road Films’ Side Effects, starring Rooney Mara,Channing Tatum, Jude Law and Catherine Zeta-Jones.

Soderbergh’s last film centers around a mentally ill woman played by Mara who unwittingly gets wrapped up in a murder after taking a new miracle drug. The suspense unfolds as her boyfriend (Tatum) and two psychiatrists (Law and Zeta-Jones) get wrapped up in the drama in an effort to figure out whose to blame. Or what’s to blame? The film is less about the actual murder than it is about the pharmaceutical industry and the drugs it promotes to treat depression. Deep!

The likes of Donna Karan Matt Damon, Mamie Gumer, Stefano Tonchi, Amy Fine-Collins, Kate Mara, and Rachel Roy made it a movie night for Soderbergh’s latest. After the heavy filmic material, the mood lightened at the Stone Rose Lounge afterparty, as guests sipped on Grey Goose cocktails. Swanky and in full swing, the bash involved a Dolce & Gabbana-clad Tatum and Tom Ford-donning Law kicking back with their respective entourages. Meanwhile, Soderbergh looked relaxed (or perhaps relieved to be done?) as he chatted pals at his table. Though his new career will involve still images instead of moving ones, we hope it’s just as meteoric. Worked for Schnabel!