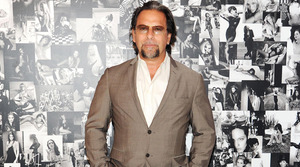 (NEW YORK) Get ready for a dose of lens envy: Yesterday, Christie’s and Jimmy Choo threw a luxe luncheon for famed photographer, Sante D’Orazio. Guests were invited to Christie’s (the private sales galleries, to be exact) for a preview of D’Orazio’s exhibition, Other Graces, hosted by the photog along with Lydia Fenet, which showcased 50 of some of D’Orazio’s most iconic subjects and (mostly nude) images of the like of Kate Moss, Stephanie, Seymour, Naomi Campbell, Christy Turlington, and Johnny Depp.

Speaking of Turlington, according to D’Orazio’s studio manager Diane Prete, a B&W photo taken in 1993 entitled The Panoramic View of the supermod sprawled out on a white bed is his most frequently sold photograph. As for the truest natural beauty, among the many glam lasses to get shot by D’Orazio? “Christy Turlington: she’s just natural and always very beautiful,” said D’Orazio sans a moment of hesitation. While D’Orazio has photographed many of the iconic supermodels, other luscious ladies who’ve posed and preened before his camera include Pamela Anderson, who the photographer once shot for Playboy. How’d it go? ” We’re good friends. But I don’t drink, and she wanted to go out for margaritas after the first day of shooting. Basically, I had to go rescue her from running around the Chateau Marmont nude!” D’Orazio recalled. “[Pamela] jumped in the pool; I was trying to get her out and all I had was a kitchen towel, because that was all that was available,” said D’Orazio. “I finally got her home. She never showed up again for the rest of the shoot, and Playboy canned it.” Considering that D’Orazio’s illustrious career has spanned 35 years, we’d imagine that’s just the tip of the iceberg in terms of salacious shoot stories.

While D’Orazio was hard-pressed to come up with a runway stalwart still on his shoot wish list, his ideal repeat performance is none too surprising: he’d dig another shot at shooting Moss. Will that woman ever stop working it for the camera, given the perpetually massive (obsessive) interest in her visage and her every move? Not anytime soon, surely.

As guests arrived to the exhibition they entered through a room lined with Jimmy Choo’s sizzling offering of Pre-Fall heels from their new collection, entitled The Season, which aptly is meant to evoke the spirit of a season full of events. Ladies who are no strangers to the event world trotted out in their Choos, including Olivia Chantecaille, Ann Caruso, Chelsea Leyland, Zani Gugelmann, Adelina Wong Ettelson, Dr. Lisa Airan, and Lady Liliana Cavendish. The Daily sat next to Lady Cavendish, a former model, once photographed by Richard Avedon, who knew her fashion history backwards and forwards, effortlessly discussing everyone from Courrèges to Geoffrey Beene. How many Choos does she own? “Oh, probably hundreds! I have more shoes than Imelda Marcos!” A lady after our own heart.

We also caught up with bauble maker and girl-about-town Genevieve Jones to find out what’s been on her plate this season: “I’ve been continuously working on my jewelry line. With the upcoming Met Ball’s punk theme, my safety pin earrings have been super in demand.” D’Orazio is apparently one of the first people she knew when she moved to New York, so we just had to ask if she’d ever let him do a nude photograph of her (can you blame us?). Oui, oui, apparently. “Yeah, totally! Are you kidding? I would definitely trust my body and all of my insecurities with someone like Sante, because I’m sure it would come out amazing.” Guess we’ll have to stay tuned for that collab. How about Miss Jones and nothing but a pair of Jimmy Choo’s? Get your camera out, Sante!
PAIGE REDDINGER