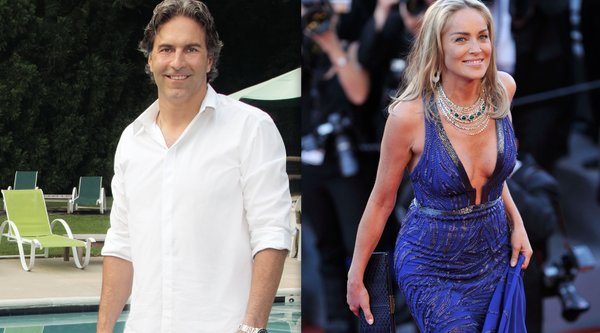 (NEW YORK) Yesterday, Sharon Stone‘s new paramour was revealed in Page Six: Michael Wudyka, Hamptons local and owner of Enclave Inn, a chainlet of affordable spots to slumber out East. The name sure rang a bell here at Daily HQ. Pourqoui? We chatted up Wudyka last summer! Of course, we had to share our findings on Stone’s latest love. To recap: Wudyka swapped the plush Michigan ‘burb of Bloomfield Hills for Bridgehampton’s equally lush environs in the dead of winter. Wudyka ended up buying a motel right on Montauk Highway, and soon enough, a quintet of Enclave Inn locations came about. No vacancies around here!
BY ALEXANDRA ILYASHOV

How did you end up in the Hamptons?
In 1999, I moved to the East End with my wife at the time and my two really young boys. I was working in Detroit’s automotive industry, and I wanted a life change. My sister had a house out in Montauk so we decided to move closer to her, even though we had only visited once. We flew out in February. I thought I would just get a job easily, but at that point there wasn’t a lot of business out in the area, so we bought the Bridgehampton Motel from Martha and Alexis Stewart. One location turned into two, then two turned into five!

How was doing business with the Stewarts?
I thought they’d be a little different, but they were wonderful, supportive, and understanding! Martha and Alexis knew the business intimately, from how all the beds were made and where to buy the supplies. I was kind of taken aback! I thought they would’ve hired somebody to do all of that.

Do people ever ask you if Martha’s still involved?
Well, for a long time they actually thought that I was with Alexis, for no other reason than us being associated because I was buying the motel!

How much did you charge for a room when you first opened?
I was completely naive to what the Hamptons were like, so we charged $99 dollars a night.

How long did that last?
One season. It was just completely crazy; I hadn’t anticipated the supply or demand in the area. It’s not that I liked to raise my prices, but there is a need due to the cost of living. You really only have three months to make your money. Actually, I’m probably 20 to 30 percent cheaper than anybody else in the area!

Do you deal with criticism about prices?
People who aren’t familiar with the Hamptons walk into a room that’s $300 or $400 a night expecting The Plaza— and what they see is pretty much a 14’ by 14’ room with down pillows and comforters. After calling around, people get it, but there is a bit of sticker shock at first. But Europeans understand completely, however!

What impact do irate customers on, say, TripAdvisor.com have on business?
Obviously, everyone has an opinion, but some people are just not nice! If they don’t get a discount, or things are not picture perfect, they will try to ruin you with one of those [negative comments]. It’s not necessarily fair. We do our very best to keep the place clean and nice, but there’s just people out there that like to complain about everything.

Your sons are in college now, but what was their childhood like?
My sons run with, and were raised around, some very affluent people. There is definitely a wide spectrum out here, so they’ve had the opportunity to see both worlds. It was my responsibility to teach them a strong work ethic, integrity, honesty, and perspective. Thanks to my job, I was able to coach baseball, football, and soccer. I was basically a stay-at-home dad who worked flexible hours.

Do you know how to beat the traffic?
Absolutely, and I’m definitely not sharing my routes.

Ha! How else do you give back to the community?
I was on the chamber of commerce, I’ve sat on school PTAs, and I’m on the boards of a couple of charities. There are a lot of summer businesses that just open up, then leave, but I’m committed to year-round success!

Are you busy all year-round?
The busier I am during the off-season, the more successful I am during the peak season. But I have othre projects, too. For about six years, I’ve owned East Hampton Studio, a 35,000-square-foot sound stage where we host functions and show movies. Last year, Cirque du Soleil came! I also build houses with a friend who’s a developer. And I produce local television programming that airs from Montauk to Manhattan. I have my own show!

Wait, what?
It’s called The Real Hamptons, and it’s basically about different charities, among other things I find interesting. Last year, it was on weekly! But this year, I’ve only put out three episodes—I’ve been a little busy.

Obsessions, Discussed! With Michelle and Mika