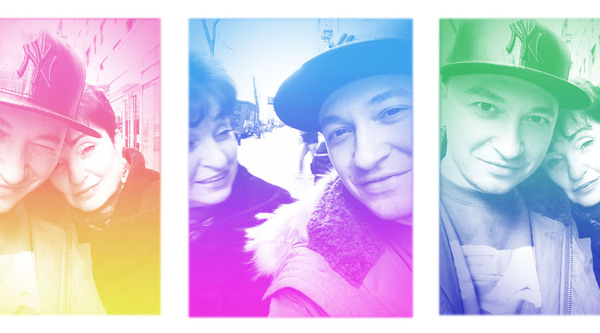 Mom’s got a birthday, JoCo has a million things on the to-do docket, there’s an adieu supper for a Marie Claire pal, plus oodles of music recs: Welcome to the life and times of Sergio Kletnoy, assistant to Cosmo EIC Joanna Coles…

Monday
Let me paint a picture for you: It’s 7 a.m., I’m half asleep, I get into my shower, hot water is running down my body (don’t get too excited, this isn’t a Penthouse letter) and I start soaping up. A hot shower sends a wake-the-f***-up signal to most people’s brain, unfortunately, it has the opposite effect on me. It makes me sleepier. I don’t recall what happened next, but my guess is that I slipped, fell and hit my head on either the floor or the toilet. I must have been unconscious for at least 20 minutes. When I finally woke up on a cold bathroom floor, in a pool of soapy water, with the shower curtain underneath me, I had a huge bump on the back of my head. What a way to start my week! It was like a scene out of the Life Alert commercial: “I’ve fallen and I can’t get up…” Fashion week is just around the corner; last thing I need is a Hilary Clinton situation on my hands.

Tuesday
Today was a huge blur: meetings, conference calls, lunches, the usual. But the only thing on my mind is the final hurrah for Jeremy Spears, my Marie Claire partner in crime. Jerm traded in his captain hat as MC’s model booker, for that of an agent at Model 1 Management. What a dark and mournful day for me. Who will I make fun of, trash talk with, and use as my in-house Steven Klein? Those are some huge shoes to fill. So I’ll either have to clone myself or start interviewing other candidates for Jerm’s replacement as my Hearst BFF. To celebrate his new gig, we went off to dinner at Rosemary’s in the West Village. I had the most mouthwatering chitarra and carbonara pasta with a radish salad, followed by dinner #2 with my BFF Courtney for an out-of-this-world-juicy-and-buttery Lobster BLT at L&W Oyster Bar in Midtown. I seriously have an overeating problem, because once I was done with both dinners I went home and devoured a pint of Talenti’s Sea Salt Caramel gelato. I really don’t know how MC’s Kyle Anderson eats so much and never gains an ounce; he must have made a pact with the fashion devil. Maybe it’s time I finally listened to Jessica Simpson and Jennifer Hudson and joined Weight Watchers. Anyone got the number?

Wednesday
Just a few nuggets from my day: helped to organize a spur-of-the-moment photo shoot for THE BOSS, scrambled to find hair and make-up for this major shoot and simultaneously shifted her entire schedule to fit this shoot into an already congested day; searched high and low and finally found a top from Olatz that JoCo was obsessing over; moved about 100 pages of copy for our sizzling March issue; got a flu shot; gave heart palpitations to a handful of Cosmo ladies by introducing them to B. Smyth, a hot new R&B singer and a future heart breaker, backed by Justin Timberlake’s manager and Justin Bieber’s publicist, so you know this kid is about to blow up. Also, I managed to get my paws on a stack of Oscar screeners, including Argo, The Flight, Silver Linings Playbook, The Impossible and Rust and Bone. So you know what that means: hello couch, a few more pints of ice cream and if you’re trying to reach me, leave a message after the beep. I’ll be very busy eating and tearing up…

Thursday
Today is mama Kletnoy’s birthday and before she headed down Fifth for some birthday shopping, we met up at ABA, our fave Turkish place for a big birthday lunch. Perfect time to catch up on all the latest family goss and talk about everything except her age. After all, age is just a number, and this number shall never be discussed, especially on a birthday. Let’s just say that in her mind, I’m still 18…Later in the day, Madonna’s hair god, Andy Lecompte, popped by to see JoCo and I. Andy is the man responsible for introducing me to The Queen exactly a year ago at the Golden Globes. So I owe him my first born, my high-tops collection and whatever else his pretty little heart desires…

Friday
Find! Download! Obsess over! “C’mon”, new single from everyone’s fave dirty girl Ke$ha; “Girls” by Santigold from the soundtrack of the most talked about TV Show “Girls”; dubstep banger “Masters Of The Sun” by Kids Of The Apocalypse; “Pink Matter” (Remix) from golden boy Frank Ocean with the help of a mini Outkast reunion of Big Boi & Andre 3000; “Suit & Tie” by Justin Timberlake and Jay-Z; “Monarchy” by Disintegration and the ultimate seductress Dita Von Teese; and “Snow”, a song that has taken over my life this week, by the newest Swede pop star Frida Sundemo. Have a great three-day weekend and I’ll be back next week. Until then, catch me on Twitter at @SergioKletnoy