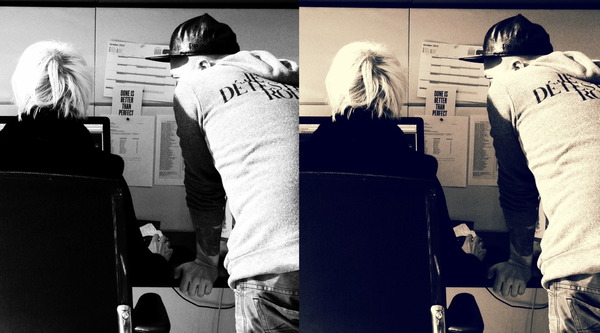 A bit of spa-centric R&R to kick things off, surviving the frigidness of this week, some insane-sounding planning for Cosmo editrix extraordinaire Joanna Coles (the lady really did the Inauguration right, non?), and swag galore: such was life for Coles’ awesome assistant and oh so much more, Sergio Kletnoy. Can we borrow some of those preview CDs, s’il vous plait?

Monday
I have a dream, that someday, every Monday will be a part of the weekend and not just on holidays like today’s MLK Day! So while THE BOSS was in D.C. for the Inauguration (DUH!), partay-hoping at no less than 10 major shindigs, as well as the swearing-in ceremony, I treated myself to a day of pampering with my BFF Courtney. Three hours at the Russian Turkish bathhouse on East 10th Street, followed by an hour-long Thai massage (which included a 200 lbs. Russian man walking on my back as if going for a casual stroll through the park) and a dead-sea salt scrub (which made my skin softer than a peach). After sweating out at least five pounds of grease, from all the burgers and fries I consumed over the holiday break, we made a green-juice pit stop at Liquiteria, followed by more pampering at Broadway Nail and Spa. On the menu: a green tea pedi, mani, and a foot massage. So what if I missed the Inauguration, Beyonce’s lip-synching and Michelle’s bangs ‘n dress! If Anne Hathaway taught me anything, it’s that if you don’t focus on yourself at least once in a while, you will end up like Andy-in-The-Devil-Wears-Prada-and-end-up-quiting-on-Miranda-Priestly, and that wouldn’t be a good thing now, would it. That’s all.

Tuesday
Woke up this morning in my hotter than the Death Valley apartment, under a Ralph Lauren down comforter, on a Tempurpedic mattress, wishing for the winter weather to finally make an appearance. When will it finally get so cold that even a few blocks of walking will freeze my face, ears and hands off, you know, just for fun. When I walked out of my apartment building I was greeted (ta-da!) by a cold wind, which slapped me in the face harder than Bette Davis slapped Joan Crawford in Whatever Happened To Baby Jane. I’m glad that out of all the things I’ve ever wished for, this is the one wish God decided to grant me. I suppose it’s comforting to know that once in a while, the almighty listens. But next time can he help with my lottery numbers, or at least let me skip the line at NoMad?

Wednesday
Between my e-mail chain concerning JoCo with a HUGE celeb, (no names allowed) I had a moment to finally open a third of my mail from the last three weeks. Just a few of the items that were waiting for me: The Flex Belt; P90X DVD’s; 18 packs and seven flavors of Extra sugar-free gum; three workout DVD’s from Ballet Body (Core, Upper Body & Lower Body); Gela Non-Stick Coated Knives; Connor Maynard’s new cd “Contrast” signed by the British hearthrob; limited edition box set called “I Got A Boy” from South-Korean girl group Girls’ Generation; a pile of no less than 30 CDs to review for upcoming coverage in the mag; about 40 international editions of Cosmo; a duck-shaped iPhone case from Moschino and Madonna’s latest fragrance, “Truth Or Dare Naked”. My area is beginning to resemble that of a troubled individual from an episode of Hoarders. I will be needing an extreme cleaning specialist in 3, 2…

Thursday
Today amongst a typical list of to-do’s, I spearheaded JoCo’s first-ever live Twitter chat and then sent her off to a dinner with the mayor at his palace on the UES. The rest of my uneventful day paled in comparison: an Austrian-themed lunch (sautéed chicken with mushrooms, mustard potatoes and radish salad) from the Hearst cafeteria and zero interactions with celebs. FACT: A day without at least one celeb sighting or a Twitter fight with someone famous is a day not up to par with Sergio’s standards. After work, I jetted off to million-calorie din at Angelos Pizza on West 57th Street with my former Marie Claire peeps, where we stuffed our faces with Insalata Mista and three huge pizza pies with mushrooms, olives, pepperoni, roast peppers, and extra cheese. After which I just rolled myself home.

Friday
Find! Download! Obsess over! Pop-R&B stomper “Lolita” by Leah Labelle and produced by Pharrell; “Paradise On Earth” by the Miami-based singer-songwriter Chris Cab; future club smash “LUVVBAZAAR” by SSION; “My Number” by the super cool English rock band Foals; and “Starman” by Swede pop duo Sally Shapiro with Electric Youth. Back next week; until then, hit me up on Twitter at @SergioKletnoy!