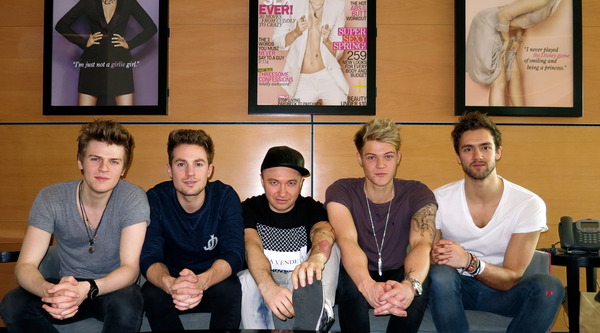 What do Christine Quinn, the latest boyband eye candy to come from the U.K., and sharing sushi with a haute new songstress have in common? They all play a role in the typical weekly grind of Sergio Kletnoy, assistant and oh so much more to Cosmo editrix Joanna Coles…

Monday
Totally had a “holy crap” moment on my way to work this morning. I spotted the latest New York mag with Council Speaker Christine Quinn on the cover, who just happened to be THE BOSS’ coffee date this afternoon. I prepped all day for my big meet-n-greet with the lady of the moment, who will most likely be the next mayor of NYC. My entire afternoon was spent researching the internet for proper etiquette rules on meeting a politician. Do I curtsy? Do I tip my baseball hat off to her? Do I shake her hand firmly or softly? Should there be a kiss on the cheek? All life-changing questions, answers to which I couldn’t find anywhere. When Chris finally made her way to the Cosmo floor, she greeted me with the “handhug,” and suddenly, all felt right in the universe again.

Tuesday
Last night at Bowery Ballroom I witnessed the Big Apple debut of Lawson, the latest British heartthrobs, best described as a hybrid of Maroon 5 and Coldplay (only much prettier). Check out their hypnotic single “Learn To Love Again”. Majorly impressed with the boys from Lawson, I made their publicist bring them by the Cosmo office for a meet and greet with JoCo and the rest of the ladies on staff. Andrew (singer), Joel (guitarist), Ryan (bassist) and Adam (drummer) didn’t disappoint, except when they refused to take their shirts off for a few overzealous web editors. Being around all these heartthrobs crushed my dreams of becoming a serious boy-bander for so many reasons: I can’t sing on key, I don’t have the patience to practice, nor do I have a six-pack. There really is nothing like hanging with a bunch of 20 year old lady-killers to make you feel all self conscious on the inside. I felt like Eddie from AbFab, in the losing weight episode when she told her mother that inside of her there’s a skinny person just dying to get out, only to hear her mother say “Just the one dear?”…

Wednesday
For the past week I felt like everyone in the city migrated to my hood, particularly to the East 96th street train station stop. Getting on the already overcrowded train has been a struggle. I’ve been pushed, shoved, squeezed, hit, stepped on, elbowed, bad-morning-breath’d on and violated in every way possible, basically the same feeling I experienced tonight at the showcase for Motown Records’ future R&B superstar, B. Smyth at the Gramercy Theatre. The crowd was going completely nuts for this 19 year-old hottie, with girls screaming, pushing and elbowing to get to the front. B (short for Brandon) had all the right moves, a great voice and a few killer tunes. It’s only a matter of time until he sets the charts blazing and becomes the next big thing. After the show, my BFF Courtney and I rushed off to Sushi of Gari, where my favorite new artist of the year, Nikki Williams, joined us for hot sake, Sapporo and the best sushi in the city. Nikki’s debut album is set for late spring and it is going to be HUGE! Her mind-blowing song “Kill, F*ck, Marry” has been on repeat on my iPod for the last two months. I haven’t been this excited about an artist since I came across Florence Welch a few years back.

Thursday
Most of today was spent finalizing the details for JoCo’s trip to New Orleans for Super Bowl XLVII, after which I spent reading Tommy Mottola’s Hitmaker. Mr. Mottola is a legend in the music biz, having spent a huge chunk of his career running Sony Music and having protégés that became major superstars, including Carly Simon, John Mellencamp, Diana Ross, Ricky Martin, Gloria Estefan, Shakira, Celine Dion, Jennifer Lopez and Mariah Carey, whom he discovered, married and later divorced. Shutting off my phone, I want to take in every juicy detail…

Friday
Find! Download! Obsess over! This week you are getting twice the size of must-have tunes in honor of fashion week and my no desire to write during this non-stop whirlwind of fashion heaven and hell: “Please Don’t Say You Love Me” by an English singer-songwriter Gabrielle Aplin; “Full Of Fire” from the Swedish electronic duo The Knife; “One Way Trigger” by one of New York’s finest The Strokes; “Ashes Of My Paradise” from the American electro-pop singer-songwriter Kelly Sweet; Tiesto Mix of “Carried Away” by indie rockers Passion Pit; “Heaven” from one of my all-time fave bands Depeche Mode; “San Francisco” by the LA bred songwriting duo Foxygen; “Here” from London’s newest pop-star-in-waiting Syron; “Float” by the Southern Cali band Pacific Air and finally my fave new song, “Rumour,” by 17-year-old Brit pop star Chlöe Howl. I’m taking a much needed break from column-ing for the next two weeks, but you can follow me on Twitter for my every day banter at @SergioKletnoy