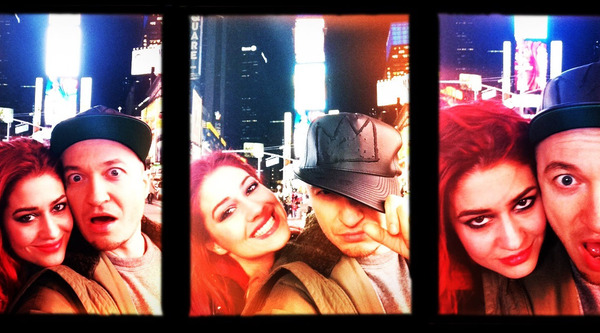 Are your eyes and ears ready for the latest antics and jams Sergio Kletnoy, the right-hand man to Cosmo editrix Joanna Coles, has rustled up this week? Probably not, since they’re always ever so slightly too much to handle (in the most awesome way possible!). Ready, set, go!

Monday
There are four necessities I cannot live without: food, water, air and music. Although if I had to starve for a day or two I’d probably survive, but take my iPod away and I turn lifeless, pale and irrational, similar to a zombie from Night Of The Living Dead! I literally get excited, overjoyed and fulfilled upon discovering a mind-blowing tune. Case in point, Demi Lovato’s “Heart Attack,” which almost gave me a cardiac arrest this morning. YES, IT’S THAT GOOD! Big electric beats, undeniable melody, and lyrics more addictive than Lindsay Lohan’s personality. It’s a perfect pop song that would fit like a glove on Britney’s first two albums. Here’s the kicker: after work I met up with my fave new artist, Nikki Williams, who’s debut single “Kill, F***, Marry” I premiered on Cosmopolitan.com a few months back. She hugged me and said: “One of my songs just went #1 on iTunes.” In my spot-on NeNe Leakes I blurred out: “SAYWHATNOW?” It turns out, Nikki co-wrote “Heart Attack” and after 14 hours of release, it shot straight to #1 in nine countries, including the U.S. of A. The rest of the night was spent celebrating with an impromptu photoshoot in Times Square while listening to “Heart Attack” on my iPod, followed by endless drinks at The Three Monkeys in Midtown. For an inside scoop on “Heart Attack”, check out my exclusive over at Cosmo and prepare yourself for Nikki’s own pop world domination with the Sia-penned “Glowing” in weeks to come.

Tuesday
After my crazy night with Nikki and only a few hours of sleep, the only thing I wanted was solace in my bed, under the sheets and away from sunlight, but JoCo awaits for no one! I made my way to the office, popped a few Aleve’s, drank two cups of V8, followed by four cups of black coffee, and went from Ke$ha to Anne Hathaway in exactly 26 minutes. Don’t ask, don’t tell.

Wednesday
Ever since I can remember, I’ve been obsessed with supermodels: from Twiggy and Veruschka, to Iman and Christie, to Cindy and Naomi, and of course Kate and my all-time fave Linda. My walls were covered with these glamazons, who I dreamed of meeting one day. Today my long list of “must-meet-supermodels” went down by one, thanks to an office encounter with one of the sexiest specimens to ever walk this earth, Australian 6’2” goddess, Robyn Lawley. You know her, trust me: covers of French Marie Claire and ELLE, and Australian and Italian Vogue. The icing on the cake? Lawley became the first plus-size model to appear in a Ralph Lauren campaign. Before Robyn stepped foot on the Cosmo floor, I moved our life-size March Miley cover from the waiting area to the closet so that my own mini-photoshoot with Lawley against the white wall would feel like a regular day on the set. We made perfect music together, Steven Meisel (who shot her for the Italian Vogue cover) would be proud. Next up: trying to find a way to pose cheek-to-cheek with the greatest supermodel of our time, Linda Evangelista. Can anybody help this Russian immigrant’s dream of meeting La Evangelista come true? Anybody?

Thursday
I love when musicians pop by the Cosmo office to dish music and meet yours truly. Plus it’s fun to see the reactions of my co-workers when they spot anyone from Adele to Cyndi Lauper passing them by in the hallway. Today I got a visit from Jarvis, a 23-year-old R&B singer-songwriter, signed to Capitol Records with a mission to win the hearts of music lovers around the world and take R&B to the next level. Check out his first single “Make A Little Room” and be on the lookout for his album Cardiology later this year.

Friday
Obsessed: “Stompa” by Serena Ryder; “Sacrilege” by Yeah Yeah Yeahs; “Entertainment” by Phoenix; “The Stars (Are Out Tonight)” by David Bowie; “Changeling” by Alison Moyet; “Motorway” by Little Boots and “It’s Over” by Beatrice Eli. Enjoy the tunes, party like there’s no tomorrow and catch me on Twitter until next week at @SergioKletnoy

Shot of The Daily: Alber and Cara Rehearse