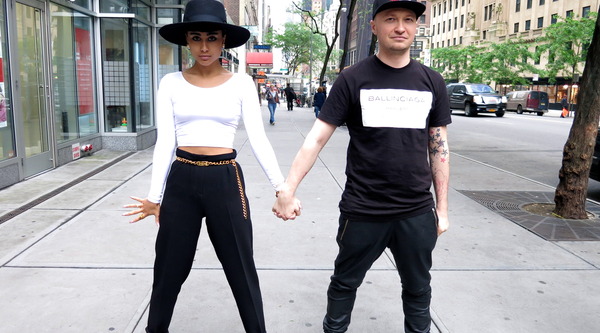 Weather woes, a Hearst lockdown (…after a hot dog binge of a lunch), and a boozy river cruise that doesn’t exactly go according to plan: this week is full of tribulations for Cosmopolitan‘s Sergio Kletnoy, resident gatekeeper for EIC Joanna Coles. Read on for the full recap!

Monday
Dear weather gods: Please pick a personality and stick with it. It’s June, and this mixture of abrasive wind and cold rain is not what I had in mind for my summer. Today I broke two umbrellas, one on my way to work, the other on my way home from the office. I was pushed and shoved by one too many angry New Yorkers on the train, who needed a tic-tac or two before catching the downtown 6 to their final destination. I ate my feelings at a local Wendy’s: crispy chicken sandwich, large fries and a large Cherry Coke. Ay dios mio! I hope you hear my prayers and fix this problem once and for all. In return, I promise to watch less reality TV and drink one less Bloody per week. Thanks.

Tuesday
A romantic cruise around NYC with musical performances on a lovely summer eve… Sounds perfect, doesn’t it? NEGATIVE! When I got an invite from my BFF Courtney for a cruise around the Hudson with R&B singer Chrisette Michelle, I thought to myself “This could be fun! Cocktails, hors d’oeuvres, live music, industry friends and quality time with lady liberty”. Boy, was I wrong. My intimate boat ride was held on a massive cruise ship with a few hundred people. Most of these folks looked like they danced on Soul Train…during its original airing, not in re-runs. There was also a tiny problem of overpriced drinks and bad diner food (no bueno), motion sickness…and did I mention that it lasted over four hours? Yeah, it was a four-hour tour! Note to self: next time Courtney offers to take you to an event, politely tell her that “Ain’t nobody got time for that!”

Wednesday
Today’s lunch from the Hearst cafeteria: two Buffalo hot dogs with bacon, hot sauce and blue cheese and one garden salad hot dog with coleslaw and French dressing. It was the best… day… ever…Until I tried going outside for a mid-afternoon coffee only to find out that our building and the surrounding streets were completely shut down. A scaffold with two maintenance workers collapsed on the 44th floor and left them dangling above Eighth Ave. of the Hearst tower. Our entire building was filled with FDNY rescuers (a dream for most women and some men inside the building). When JoCo found out about the helpless workers, she wanted to rush upstairs and rescue them like the superwoman that she is. Unfortunately the Fire Department and emergency crew got there first, wasted no time, took out a window and saved these brave men. Just another day at the office!

Thursday
Had the best lunch with one of my fave bad-girl pop stars, Natalia Kills. We met at my local go-to joint, ABA Turkish Restaurant. Nat walked in looking flawless, as always. The entire restaurant stopped dead in their tracks and if looks could kill, they would… She was decked out in signature black and white, YSL inspired: killer white pumps with a Lucite heels, black slacks, Chanel gold chain belt, white crop top and a wide-trim black hat. Automatically “Uptown Girl” by Billy Joel began playing in my head…

I thought to myself, she’s just going to sit here looking pretty while I’m stuffing my face with lebni, chicken shish, and shepherd salad. She didn’t, and ordered exactly what I was having. For the next two hours we talked about everything: the similarities of our crazy childhoods, our (in)sane families, her obsession with fashion, lovers, and of course music. I was one of the first to watch two recently-shot music videos for her upcoming album, one of which moved me to tears. Sorry, but can’t reveal a thing about them until the premiere. After lunch we casually posed for a few photos in the middle of an insanely busy 57th Street, not giving one flying f**k about the passing crowds staring at us. Kills is major trouble and for some reason I become someone else whenever I’m around her. No wonder her sophomore album is titled “Trouble”. It’s out September 3rd, and it’s a killer!

Friday
OBSESSED: “Big When I Was Little” by Eliza Doolittle; “Smile” by Benga and Charli XCX; “Gone” by Kelly Rowland and Wiz Khalifa; “DNA” by Empire Of The Sun; “I’m Waiting Here” by David Lynch and Lykke Li; “Take A Look At The World” by Ralph Myerz and Annie; “Call These Boys” by Estelle; “Masters Of War” by Ed Sheeran; “Go Kindergarten” by The Lonely Island and Robyn, and “Skirt” by Kylie Minogue.

Look Of The Daily: Dree Hemingway in Calvin Klein Collection