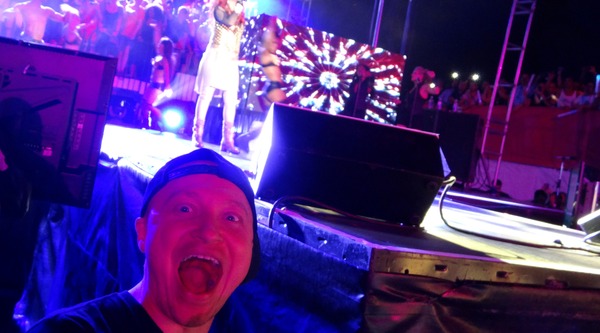 There’s simply one word to summarize Sergio Kletnoy‘s week: Cher!!! Far from Cosmo’s halls at Hearst or the editrix boss, Joanna Coles, Kletnoy had a pretty maje moment and is here to share every bit of minutiae…

There’s only one thing worth talking about this week. What you are about to read isn’t bragging, but merely reporting on a life-changing experience. I spent this past Sunday with my family in Brooklyn, because there’s nothing I love more than dusting off my passport and traveling to another borough for quality time with mishpucha. After many hours at a family lunch, while stuffing my face with Russian gazpacho and pierogi’s, my cell rang and I jumped, hoping a familiar non-judgemental voice was on the other end. It was the office of Liz Rosenberg, the gate-keeper to Madonna, with an offer I just couldn’t refuse.

A certain female icon was in town for a performance at Pride and if I wanted to witness her once in a lifetime appearance, the VIP pass for family and friends was mine. The icon in question, one Cherilyn Sarkasian aka CHER! Yes, THAT Cher! The woman whose Twitter banter is as entertaining as her “other” accomplishments: mother, singer, entertainer, goddess, TV show host, fashion rebel and the winner of an Academy Award, Grammy Award, Emmy Award and three Golden Globe Awards. I dropped the pierogi’s, jumped on the train and got to the Pier by the Westside Highway 30 minutes before Cher arrived. Once inside I realized that I was one lucky MF!

There was a barrier in front of the stage separating the 15-20 people who were in some way related or friendly with Cher and the 5,000 other attendees. I felt guilty! Probably the same guilt I once felt as a 12 year old for stealing a 1990 Vanity Fair with Madonna on the cover from a local library. Although this time, no one’s going to revoke my pass or ban me from returning again. Finally at 9:47 p.m., the stage went dark and Whoopi Goldberg came out (in purple crocs?!?!?) to briefly introduce the woman that needs no introduction or a last name. The screams from the crowd could probably be heard for miles when the music began and an undeniable voice sang “I don’t need, your sympathy…” Finally, Cher appeared before us, almost god-like. Her wig was a mixture of red, orange, and blond, her makeup was flawless and her gold and black color outfit (consisting of trousers, kilt, mesh and gold metal top with a leather jacket over it) was shining like a meteor falling from the sky.

Cher was over-the-top…and we wouldn’t have it any other way. She moved closer at the stage, looked directly at me and smiled, I screamed like a girl in one of those ancient videos of Beatles fanatics. I was so close to one of the biggest icons of our time that if I wanted to (and I did) I could have touched her. Unfortunately Cher isn’t one to be f***ed with and she probably would have slapped me and have me thrown out. I didn’t take any chances and continued screaming like a 12-year-old for the next 15 minutes, during which Cher performed a medley of “Strong Enough”, “Believe” and her new club stomper “Woman’s World”. It all went by so quickly, after which she thanked the crowd and within seconds disappeared into the night. I quickly followed, blasting “If I Could Turn Back Time” on my iPod on repeat, wishing I could re-live that magical moment over and over again…

Have a great July 4th weekend! I’ll be back next week, until then follow me on Twitter at @SergioKletnoy and enjoy these awesome new tunes:
“True Love” by P!nk and Lily Allen; “All The Days” by Haerts; “My Heart Is Refusing Me”  by Loreen; “Kids” by Mikky Ekko; “I’m Out” by Ciara and Nicki Minaj; “Dance Apocalyptic” by Janelle Monae; “Cameron” by Jilette Johnson and “Saturday Night” by Natalia Kills

Lady Gaga Wore Well Over Half a...