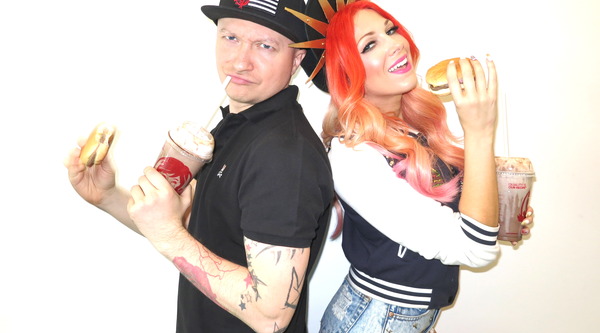 This week I felt like a hamster in a wheel, running and rushing to get somewhere with no end (or rest) in sight. My days were filled with the uzhe work load: scheduling oodles of meetings, one to many conference calls (I would totally get a gold star in running any massive switchboard), booking a last minute trip for THE BOSS across the pond, closing Cosmo’s major September issue and with all that work I still found time to overeat every chance I got. I was literally stuffed like a balloon, perfectly capable of rolling myself to work (if I wanted to)!

Trust me, I’m not complaining…there was major fun as well. On Monday I had two back-to-back dinners. First at Momoya in Chelsea with my friend Kathryn from Rebecca Minkoff, where we ate enough sushi for at least four people (the killer yellowtail and cucumber wrapped in tuna roll and salmon with spicy scallop on top roll were faves) and washed it down with enough sake to kill a few livers. Dinner number two was at Mellisime Restaurant inside the Carlton Hotel for a French feast with my music biz BFF’s Courtney and Phillana. It was a long night filled with delish gazpacho, sandwiched between juicy gossip and oysters with a side of more gossip and Lobster Rigatoni. God I love food! (Did I really just say that? I do after all work in fashion. Must. Stop. Eating!)

On Tuesday I caught a private performance of Skylar Grey (Eminem’s protégé) at The Box. Her excellent debut album “Don’t Look Down” is a must-have!

On Wednesday, my friend Dina Delicious (who just released a killer cover of Stacey Q’s “Two Of Hearts”) and I spent the eve at the Beacon Theatre for a 30th anniversary of Cyndi Lauper’s career defining album “She’s So Unusual”. Cyndi always brings a huge smile to my face. Her songs take me back to that place as a prepubescent kid obsessed with music and dreaming of one day meeting and working with all of my fave musicians. To this day I dream big and never go home! Back to the show, Cyn was clearly still on a maj high from her Tony Award win for writing the music for Kinky Boots. She walked out on stage and before singing a word asked everyone to stop taking unflattering shots of her nostrils, or risk the wrath of THE New York Cyndi! After all, the beauty of seeing someone live is not photos, it’s being there in the moment. I was feeling so sentimental and sang my heart out to “Girls Just Wanna Have Fun”, “She Bop”, “Time After Time” and “Money Changes Everything” without taking a single pic. My memories will last me a lifetime.

On Thursday I finally got an office visit from one of my fave singer-songwriters, Bonnie McKee who most people haven’t heard of yet, but everyone knows the mega hits she wrote for Katy Perry (“California Gurls”, “Teenage Dream”, “Last Friday Night”, “Part Of Me”), Britney Spears (“Ooh La La”, “Hold It Against Me”) as well as songs for Taio Cruz, Rita Ora, Kelly Clarkson, Christina Aguilera, Ke$ha and Adam Lambert. This girl is the ultimate Teenage Dream, she’s hot, smart, funny and up for anything. She even serenaded me with Kelly Clarkson’s “Since You Been Gone” and told me awesome stories about meeting Katy Perry and Ke$ha long before conquering the pop stratosphere. Her debut single “American Girl“ is one of the best songs of the summer. Later that eve we met up for dinner at Dream Downtown. The evening’s details are a bit hazy, I must have had one too many shots. Oh well, my life could be much worse…

Catch me on Twitter at @SergioKletnoy until next week and be sure to get your weekly dose of must-have tunes for your iPod!

“Right Action” by Franz Ferdinand; “Tunnel Vision” by Justin Timberlake; “Trying To Be Cool” by Phoenix; “White Suburban” by Skylar Grey; “Lost Generation“ by Rizzle Kicks; “Flatline” by Mutya Keisha Siobhan a.k.a MKS a.k.a original line-up of Sugababes; “Music Is Life“ by Elliphant; “Think Of You” by MS MR and a must-watch video for “Saturday Night” by one of my fave bad-girls Natalia Kills.

Look Of The Daily: Maria Sharapova In Valentino