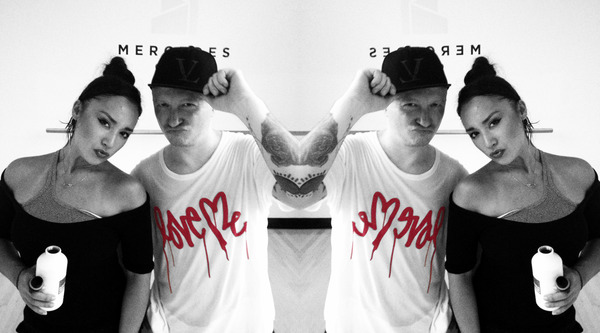 Summer doldrums? Not for our dear friend Sergio Kletnoy over at Cosmo, who spent this already sweaty week getting even schvitz-ier thanks to Madge’s trainer, prepping for a visit from a White House heavy hitter, and more…

Monday
When I overheard Cosmo’s beauty editor Loni bragging about an upcoming training session with Madonna’s personal trainer Nicole Winhoffer I begged and pleaded for an invite. No one can resist my charm, and a few minutes later I was in. The event was hosted by European Wax Center at the luxurious Strata at Mercedes House in Midtown. I didn’t even care if I had to get a full body wax to experience a work-out made specifically for the Queen of the Universe. Thankfully, I didn’t have to resort to any hair-today-gone-minutes-later tactics. I was about to experience training like Madonna does, two hours a day, six days a week. The private room was set up specifically for us, with Manduka luxury yoga mats, water, and towels. Unfortunately, the air conditioner was off…I knew trouble was brewing. The hour-long class felt like an eternity. I was soaking wet within the first 10 minutes. I didn’t feel any shame being the only male in the room, until I was the only one out of breath, struggling to keep up. No wonder Madonna looks the way she does, with a bod built like a warrior. This workout isn’t for the weak-hearted! We used muscles I didn’t even know existed. Every move was specifically designed for Madonna, using towels and rubber bands, which totally isn’t as easy as it sounds. I fell on the floor at least six times, struggling to keep up, completely out of breath and delirious. Then suddenly a remix of Madonna’s “Frozen” came on the iPod and I thought to myself, “What would Madonna do?” I pulled myself together and for the rest of the session danced like my life depended on it, or at least like Richard Simmons in Sweatin’ To The Oldies, Volumes 1-5. Who knows, I might even use my three-month pass to the European Wax Center for a full body wax. The power of Madonna…

Tuesday
Anytime I get an invite to a Cinema Society premiere, I cancel all of my plans for that evening and wait with anticipation. Case in point tonight’s screening of the action-packed-comedy sequel Red 2 hosted by Cinema Society and Bally at the MOMA. On my way down to the screening room I passed Helen Mirren, who is hotter and cooler than most starlets half her age! Once inside, I spotted Joel McHale, Fern Mallis, Nanette Lepore, Pat Cleveland, Candy Spelling, Olivia Palermo, Marcus Schenkenberg, Nicole Miller, and Lou Reed. A moment later, the film’s stars, Mirren, Bruce Willis, Mary-Louise Parker, and Catherine Zeta-Jones entered the packed room and took their seats a few rows behind me. Too bad my movie date for the eve flaked, which put her at the top of my “DEAD TO ME” list (onwards, eye roll). The film is a must-see, if only for the out-of-this-world, laugh-out-loud scenes with bad-ass Mirren, who steals every scene she appears in. She’s one sexy meemaw with a gun. After the premiere we partied it up at the Refinery Rooftop with “Agent Moses” cocktails named after Bruce Willis’ character. Now, what do I have to do to have a Bloody Mary named after me? “Bloody Serge” sounds so damn cool!

Wednesday
The pain from Monday’s workout has finally spread to every inch of my body. I am moving at a glacial pace, afraid to make any sudden turns, and planning my revenge on whomever forced me to attend this bootcamp. Oh, that’s right…It was my idea. Scratch that.

Thursday
Today I’m on my best behavior. Homeland Security was all over the Cosmo floor, carefully inspecting every inch of the office in prep for THE BOSS’ breakfast tomorrow with Valerie B. Jarrett (senior advisor to President Barack Obama). Tonight there will be no drinking, partying, staying out late, watching Love & Hip-Hop Atlanta reruns until 2 a.m. or any other tomfoolery. I have to be up at the crack of dawn to make sure everything goes off without a hitch. Tomorrow’s outfit will be all black, just like the Secret Service. I might even play Will Smith’s Men In Black while getting dressed. You know, just for inspiration.

Friday
OBSESSED: “Drew” by Goldfrapp; “Trouble,” by Neon Jungle; “Sunset” by The xx; “Thinking About You” by Calvin Harris and Ayah Marar; “California” by Mazzy Star; “Made In The U.S.A.” by Demi Lovato; “Valentines Day” by David Bowie; “Summertime Sadness” (Cedric Gervais Remix) by Lana Del Rey; “New Town Velocity” by Johnny Marr, and “Lies” by Marina and the Diamonds.

A Tough Day At The Office