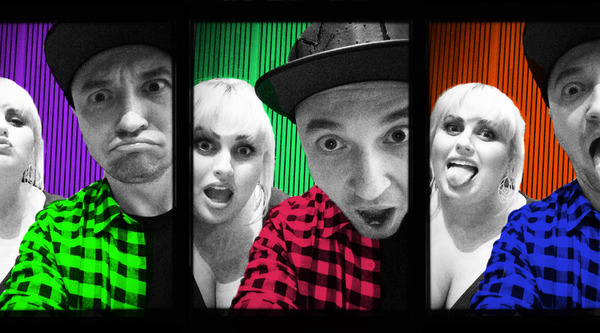 Monday
Whenever I’m inside the Paris Theatre on 58th Street, I feel like I have time travelled into another era. Appropriately enough, Cinema Society and Johnston & Murphy hosted screening of Sony Pictures Classics Kill Your Darlings fit like a glove inside this 65 year-old iconic space. The dark and moody masterpiece is based on true events, set during WWII. It’s a twisted story of friendship, love, and murder between a fascinating cast of characters, which includes William Burroughs, Jack Kerouac, and Allen Ginsberg. This dark drama stars a brilliant cast: Ben Foster, Michael C. Hall, Elizabeth Olsen, Jennifer Jason Leigh, Kyra Sedgwick, David Cross as well as Dane DeHaan, Jack Huston, Erin Darke and Daniel Radcliffe (the latter of whom attended the screening). The after party was held at the new Tao Downtown (the same place I met Cher just last week!). Over Qui Tequila cocktails named The Kerouac and The Poet, I played my fave game of “spot the celeb”: Marisa Tomei, Zachary Quinto, James Marsden, Parker Posey, Jason Ritter, John Demsey, Kelly Klein, Dree Hemingway, Jessica White, Sante D’Orazio, Hal Rubenstein, and Vogue alumna and one of my fave personalities, Candy Pratts Price. I know, I know, none of these people can compare to Cher, but who apart from Madonna and God can? Speaking of Cher, whenever I get a mention in Liz Smith’s legendary column I smile from ear to ear, even when the mention includes a brand new name that Liz personally picked for me. From this point on I will answer to both Sergio Kletnoy and Sergo Kletmoy. And if a correction of my name will always include a photo of me with Cher, than I would like for every publication to call me anything they please (as long as they call me something).

Tuesday
What a day, what a day! First I bumped into Laura Carmichael aka Lady Edith Crawley of Downton Abbey, who was chatting with a Cosmo editor on the office lobby couch. I did what any normal person would do, I asked her for a walk on part on Downton Abbey. She politely declined, and I didn’t take offense. I’m probably just way too good looking for that show. In the afternoon I had a very important job of holding Joanna’s purse at LearnVest (where THE BOSS gave financial advice to a packed room). After the speaking engagement we rushed back to Hearst for Cosmo’s screening of Super Fun Night followed by a Q&A with the show’s star and Australia’s hottest export Rebel Wilson. The show is about three nerdy female friends who decide to have super fun (whatever that entails) every Friday night. After JoCo’s Q&A, I sat down with my 2nd fave Aussie (besides Kylie Minogue, of course) for an exclusive Cosmo.com interview that included Channing Tatum, Drake, Joan Collins and her lover of the C-word! I also got to meet my hero, Matt Lucas of Little Britain fame (if you haven’t seen it, you are missing out on one of the funniest British sketch comedy shows of all time). Matt is the guy who plays Rebel’s obnoxious brother in Bridesmaids as well as her brother on Super Fun Night. Fun fact: Matt and Rebel are roommates in real life. Can you imagine living with those two? After my time with Rebel and Matt, I rushed down to Webster Hall for an incredible performance by New Zealand’s hottest export, in, like, forever… Lorde! The 16 year-old popstar just went #1 on Billboard’s Hot 100 with her moody single “Royals”. It was a long day, but somehow I managed to keep my eyes open and not fall asleep until I got in the cab. Only to be woken up 15 minutes later by a nervous cabbie, who probably thought I passed out.

Wednesday
My evening began with Alicia Keys’ super sweet mom politely telling me to get the hell (my words, not hers) out of her daughter’s seat at the Tribeca Grand Hotel screening room, where a swanky crowd of lucky few watched a Cinema Society & Tommy Hilfiger hosted screening of The Inevitable Defeat of Mister and Pete. The film was executive produced by Grammy winner Keys and stars Academy Award and Golden Globe winner Jennifer Hudson. Mister and Pete is a melancholy coming of age story about two inner city kids, who are left to fend for themselves over the summer, after their drug addicted mothers are taken away by authorities. I was literally weeping for the last hour of the film, moved not only by the heart-breaking story, but by the must-see performances from its two underage stars, Skylan Brooks and Ethan Dizon as Mister and Pete, respectively. One of my all time fave films, Fargo, plays a huge part in Mister and Pete and seeing incredible actor Steve Buscemi made my night. Of course he wasn’t the only highlight, as the people watching inside the tiny screening room was amazeballs: Tommy and Dee Hilfiger, Swizz Beatz, Napster co-founder and first president of Facebook Sean Parker, Maxwell, Clive Davis, The Hurt Locker’s Brian Geraghty, Natasha Bedingfield, Nicole Miller, Alex Lundqvist, Jennifer Hudson and of course Alicia Keys. The after party was held at Alicia’s home away from home, Jungle City studio in Chelsea. My partner in crime for the eve, E! Entertainment Television’s coolest correspondent Alicia Quarles and I danced the night away on the rooftop of the studio. We left around 2:30 a.m., who needs sleep anyway…right?

Thursday
After a long week, I finally got THE BOSS on a plane to Boston for a speaking engagement at Harvard and jetted off to the Celeste Bartos Theater inside the MoMA for another Cinema Society screening. This time I hit the mother load! The film I waited for months to see, a MarVista Entertainment & Lifetime’s House of Versace starring one of my all time fave goddesses Gina Gershon. My fascination with Gina stems back to her tiny role in Pretty in Pink and lasted all these years thanks to Cocktail, Showgirls, Bound, Face/Off as well as TV’s Melrose Place, Just Shoot Me, Ugly Betty, How To Make It In America and Curb Your Enthusiasm. Onto House Of Versace: from the accent, to the mannerisms, to the way she walked, laughed and talked…Gina did Donatella better than Donatella. House Of Versace will forever be my all-time favorite Lifetime movie. People watching inside the theatre was almost as good as the film’s sexy star in a film about a fashion empire: U2’s The Edge, Gerard Butler, Helena Christensen, Michael Stipe, Alan Cumming, Anne V, Mets hottie Matt Harvey, Susan Lucci, Madonna’s Who’s That Girl co-star Griffin Dunne, Fisher Stevens, Nina Garcia and legendary lensman Sante D’Orazio. After the film we all partied the night away at a new hotspot B & Co over what else? Martini sparkling wines. After partying four nights in a row I feel exhausted. I will be recuperating all weekend, probably with a Showgirls DVD and take out. Monday it’ll start all over again!

“Elastic Heart” by Sia with The Weeknd & Diplo

“Shot At The Night” by The Killers

“Walking On Air” by Katy Perry

“We Remain” by Christina Aguilera

“All Of Me” by John Legend

Have a great weekend and I’ll be back next week. Until then follow me on Twitter at @SergioKletnoy

Nacho Figueras on a Decade of the...