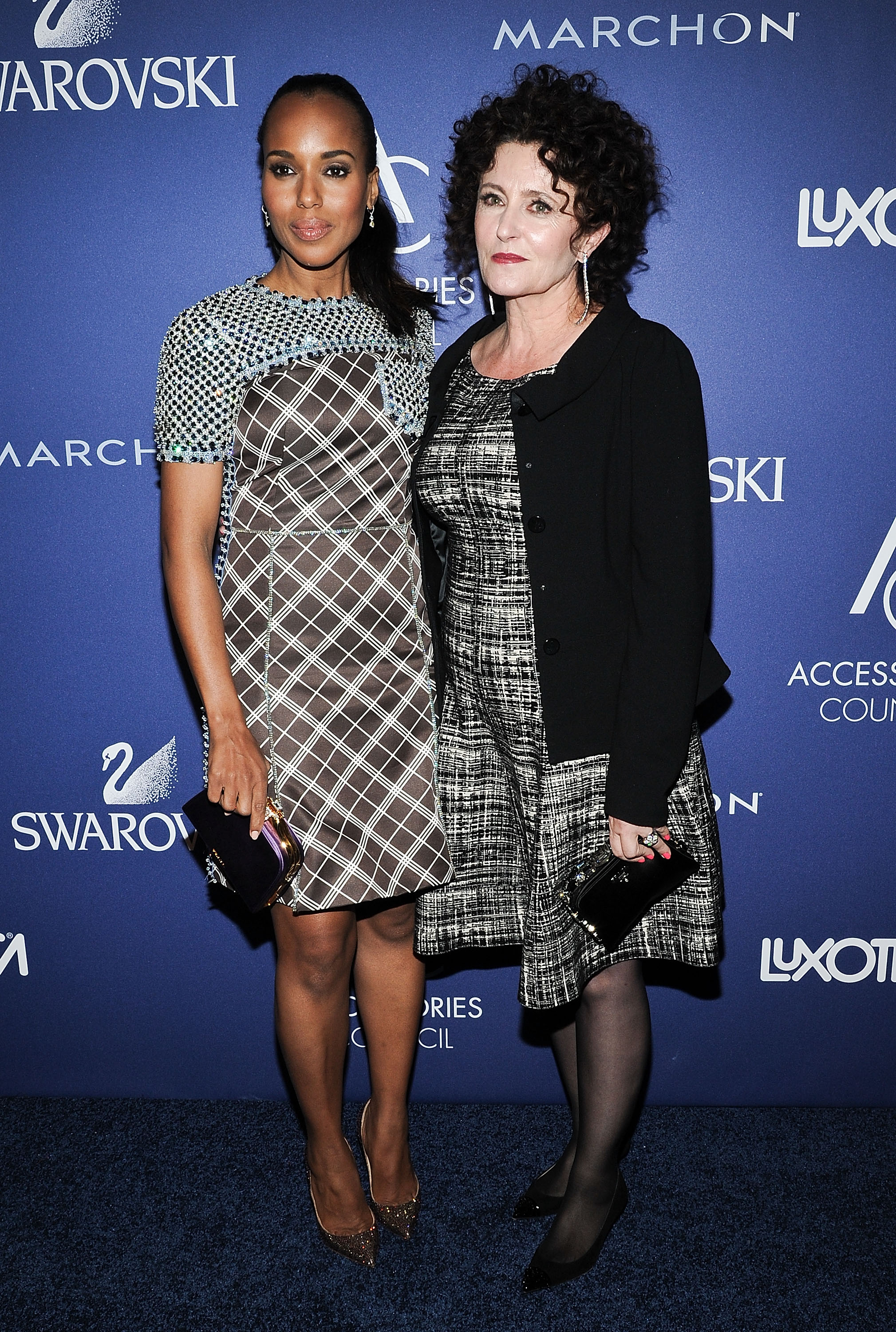 For costume designer Lyn Paolo, Scandal isn’t just a Thursday night guilty pleasure—it’s part of life. The Brit has been the brains behind the style of your favorite crisis manager, Olivia Pope [Kerry Washington] and the rest of the cast since the show premiered, while also running the wardrobes of How to Get Away with Murder and Shameless. Paolo speaks on her relationship with Washington, Quinn’s style evolution (good girl gone bad!), and what you can expect from the designer beyond the small screen in the near future. Get your wine and popcorn out!

How did find yourself as the costume designer for Scandal?
It was very peculiar actually, because I got a call from Shonda Rhimes’ assistant. I have to be honest, I had never seen Grey’s Anatomy, so I didn’t really know who Shonda was. Her producers said they would like to have a meeting with me, and I said OK. Basically, she saw my name on The West Wing, and she loved that show. She knew she was going to do another show about D.C., so she wanted a costume designer from The West Wing—it was all luck. I had my meeting with her and the producers, and I didn’t know if I was going to get the job, but she told me she loved my work. Then they reached out to me. It was fate.

What’s your relationship like with Shonda?
I love her. She’s the best boss. She gives you her trust, and she just basically says things like, “Lyn, do what you do” when I’m feeling insecure about my work. That’s a great gift. She’s phenomenal.

How did you decide on each character’s style?
Pilots [are] usually quite challenging because there are many voices in terms of decision-making. But Shonda really made it a seamless process. I think they had a clear vision, which is a beautiful thing. I made a concept board with sketches of each character, with ideas of where the character could go and what their style would be. I used that as a visual aid. We talked it through as each actor was cast in the role. Then we took pictures and showed it to Shonda and the studio. It’s a long process, like doing a big movie. In the end, we settle on what we’re going to do. 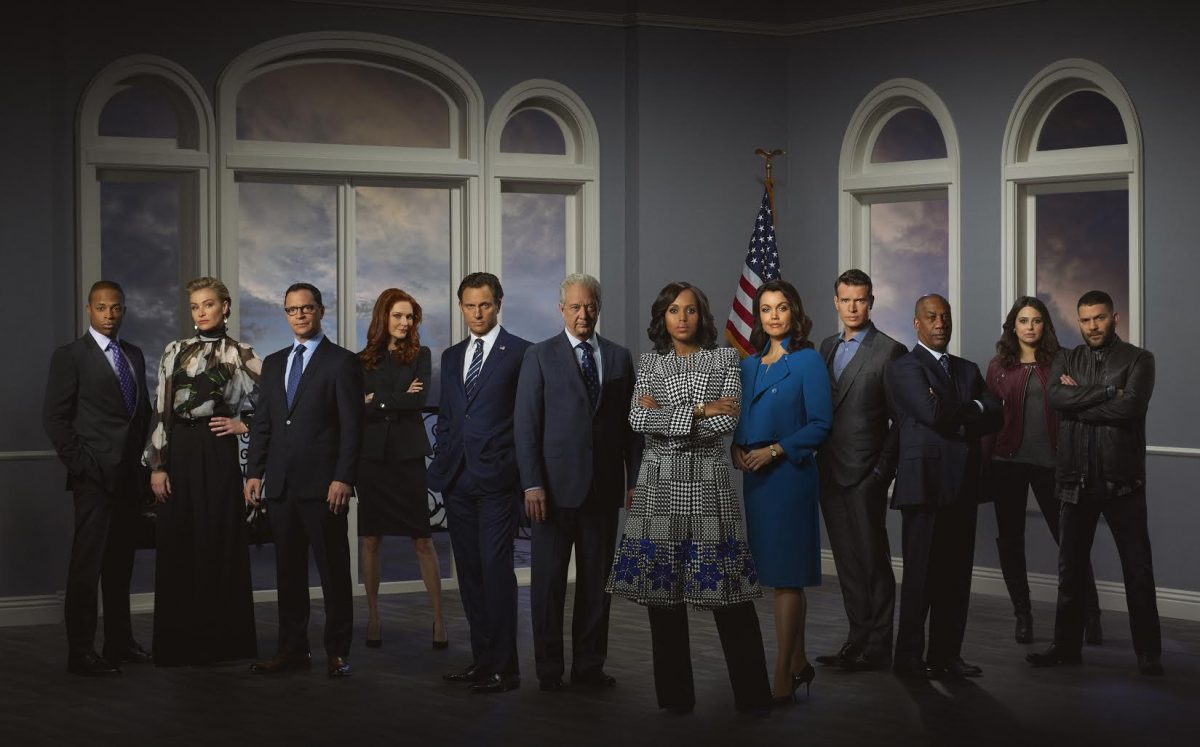 Of all the characters, whose style has evolved the most?
Quinn has, in the most obvious way. She started out very sweet in Peter Pan colors with skirts and silk blouses, and now she’s wearing leather, and practically bondage-wear. That’s the more stark contrast. But I will also say that Abby has had many reincarnations on this show. You’ll see in the flashbacks earlier in the show that she started off as a housewife with cardigans and skirts, and then she moved into suiting. She had a lot of subtle changes in her costume.

Let’s chat Olivia. What brands do you dress her in?
I tend to keep looking at InStyle and the runways…whatever’s new out there. We’re kind of like sharks, because we’re always looking. We’re not completely loyal to one brand, other than the Prada purse. Right now, we’ve been doing a lot of Vivienne Westwood and Alexander McQueen, and in terms of the coats and outerwear, Max Mara, Escada, and Stella McCartney. We’re kind of all over the place, but it really depends on the piece and the garment.

Does Kerry [Washington] ever give her opinion on Olivia’s outfits?
We have a fitting every week—we’re in the room alone together and I usually have about five or six racks of clothing, depending on how many changes she’ll have. We talk about the script. If she has seven changes [for example], we’ll start with what is happening with Olivia and how we want to express that. It’s very much a discussion and we relish those moments together. I have to say that Kerry is amazing, and she delineates between herself and the character. She is consistent and an amazing collaborator and our fittings are very joyful.

Have you learned anything from her?
I think we’ve learned from each other. I think Kerry would agree that she picked up some of the little tricks because she has so many fittings now with all the events she goes to. It’s funny that now she knows about how things should fit because she stood in rooms with some of the best tailors in the world. I think it would be disrespectful to her and her team if I gave her advice. We keep the worlds separate, but I’ll help. Kerry really knows what works and fits on her body.

Do you know what’s happening on the show in advance?
No—that’s the thing I love about Scandal. We are as excited as you are about what’s going to happen. We are so secretive because we have to be. Even the little things that ABC sends out before the show airs is very general. This week, people were sending me GIFs of themselves watching the show and how shocked they were. I will say that we’re definitely going to have some “wow” moments this season for Olivia, fashion-wise. 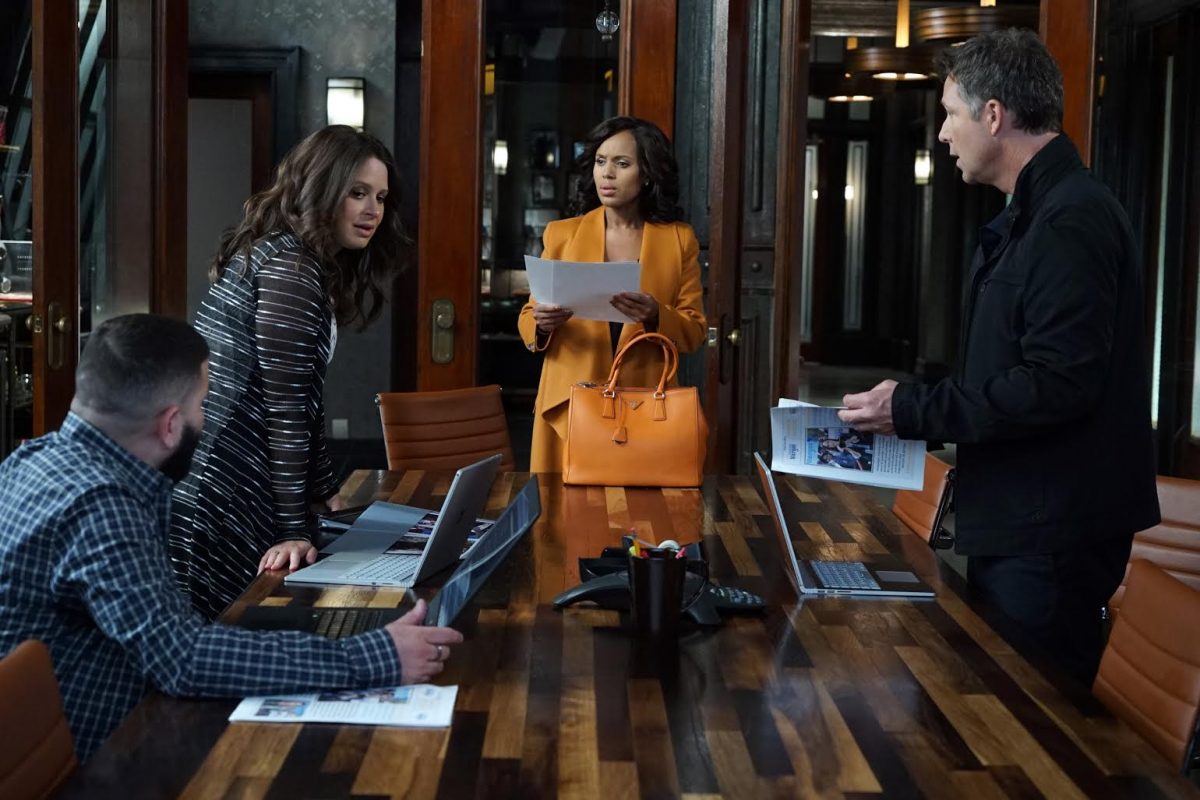 SCANDAL – “Hardball” – After a tight race and shocking conclusion to the election, flashbacks reveal what happened on the campaign trail and just how far Olivia was willing to go to win. Meanwhile, Fitz and Abby are faced with an unprecedented national crisis, and the gladiators are determined to get answers, on “Scandal,” airing THURSDAY, FEBRUARY 2 (9:01-10:00 p.m. EST), on the ABC Television Network. (ABC/Eric McCandless)
KATIE LOWES, KERRY WASHINGTON, GEORGE NEWBERN

What kind of questions do you get from fans?
Lots of questions about brands, because people want to know who is wearing what. They also want to know why they are wearing what they are wearing. This week fans were upset because we had Mellie in one of Fitz’s old sweatshirts, and when that script came out I told my crew that whatever we do we cannot have Mellie in that same sweatshirt. We found a new one, because we knew that the fans would be upset about it.

You said a few years ago that you wouldn’t launch your own clothing line because you don’t consider yourself a designer. Is that still true?
I know how hard that world is, because I have many friends who are part of it. I’d be much more interested in doing little small capsules because I’m trying to be respectful of those people in that world. I know how hard and tough it is to get your brand up and running, but I am going to do a few very small five-piece collection in the future. They can say that I am the costume designer from Scandal, but it won’t have anything to do with that.

What other shows have you been involved with over the years?
So many! It was not my intention to become a costume designer. I wanted to work in education because I love young people and I have a degree in English Literature and Education. I moved here from England in the early ’90s and I really didn’t know anybody. I knew a bunch of English people who were working on music videos and commercials, and I just fell into it. It was never a plan, and I’m so lucky that I love it. Right now I’m doing Scandal and How to Get Away with Murder, and at the same time I’m still working on Shameless. I am also doing Animal Kingdom. What I love about my job is that in the morning I’ll be at Scandal dealing with all these couture and high-end pieces, and then in the afternoon I’ll run to Warner Brothers and be dressing people in rags. That’s what’s great about my job—every day is completely different. I’m dealing with very different people on each show, and I love that. It’s never boring.

Is Virgil Abloh Headed to Givenchy?