Save Venice Masks Up For Its Black & White Ball 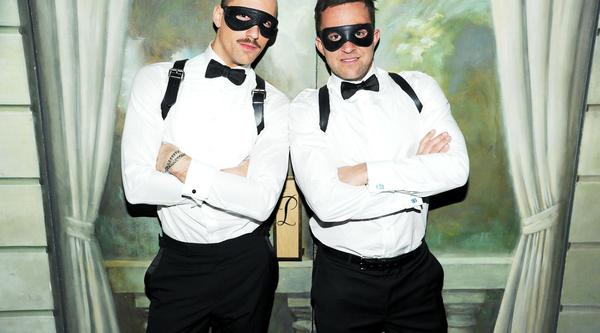 (NEW YORK) Guess who? Friday night’s Save Venice Black & White Masquerade Ball at The Pierre Hotel was a fashion face off, via a New York society who’s who behind the mask. The chic affair, which is held each year to raise funds to preserve the cultural and artistic heritage of Venice, was sponsored by Ferrari, Harry Winston, and Lanvin. Co-chairing the event? Laurie Adorno, Adelina Wong Ettelson, Dayssi Olarte de Kavanos, Cécile Andrau Martel, Mary Kathryn Navab, and Lauren Santo Domingo. The latter of which was overheard getting the party started at the cocktail hour by exclaiming, “Tequila, tequila, tequila!” Now there’s a host we can get behind.

Also arriving en masque were Zani Gugelmann, Indre and Justin Rockefeller, Taylor Tomasi Hill, Carly Cushnie and Michelle Ochs, Olivia Chantecaille, Stavros Niarchos, and artist Aaron Young, to name a few. Young’s date for the eve: Laure Heriard Dubreuil, owner of hip South Beach boutique The Webster, who donned an entirely crystal-clad Margiela mask. We don’t know how she found her way around the venue, but we do know Kanye West would have been proud. Also fully masked: Suno designer Max Osterweis, who capped off his suit with a gold Star Wars-esque helmet. Best mask winner of the eve had to be Di Mondo, who wore a fantastically frightening but stunning crystalized insect-inspired mask. â€¨â€¨Man (boy?) about town, the 16-year-old Harry Brant, was out on a school night, but when asked how many charity events he’s attended he told us, “I’ve only been to three. People think I go out much more than I do!” As for the young “it” boy’s aspirations for adulthood? “I want to possess the wonder of Diana Vreeland at Vogue! Instead of revolving around money and corporate endeavors, it was simply about the absolute fashion and splendor of this industry.” And if splendor is what Brant’s looking to study, it turns out he was in the right place to do his homework after all.
PAIGE REDDINGER