Musician Sasha Siem on Her Skilled and Soulful Sounds 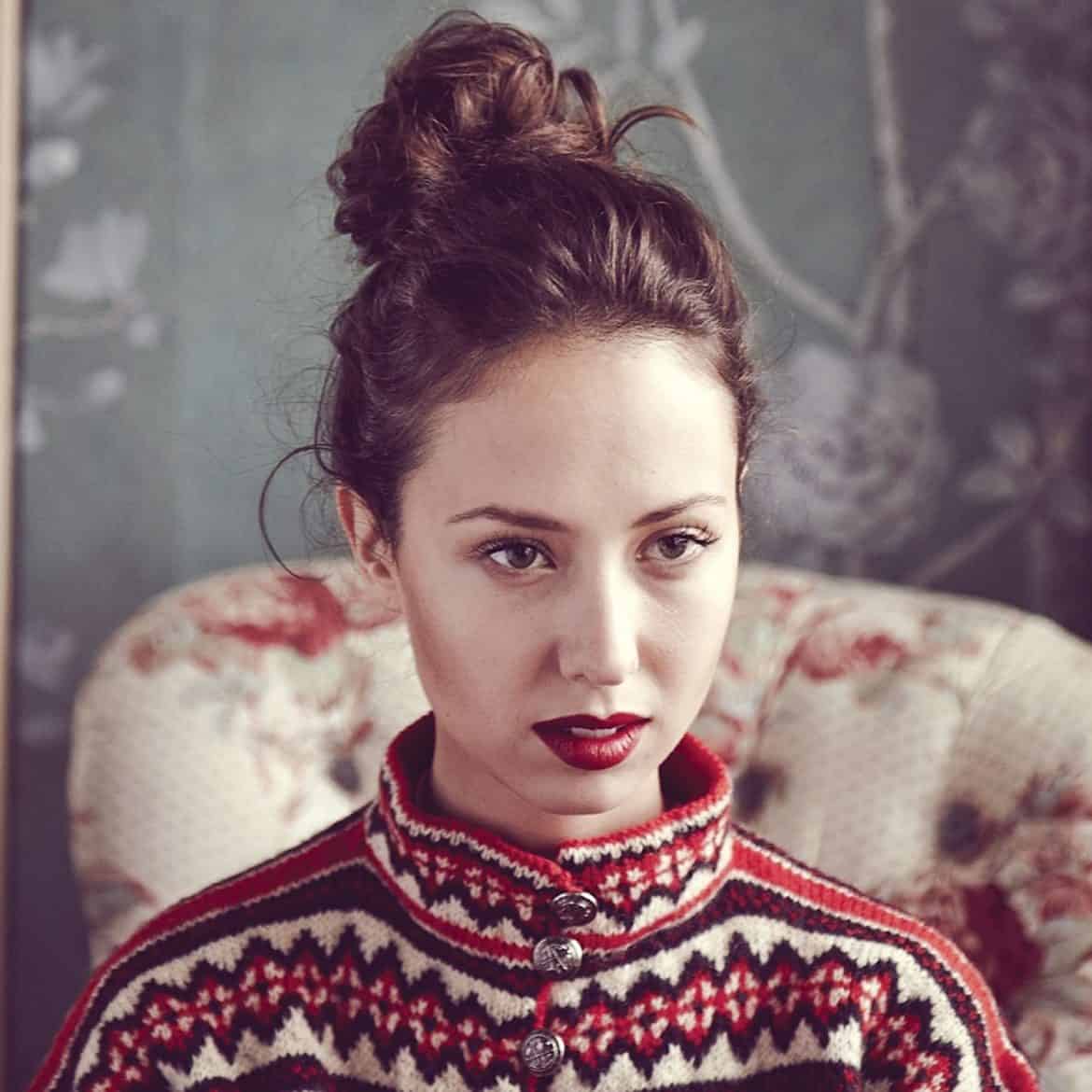 Many talents flaunt lengthy multihyphenates, but Sasha Siem is especially impressive. The British musician’s bona fides include a soulful sound via voice and numerous instruments, three albums (the latest, Holy, drops this fall), being a skilled composer—oh, and a PhD from Harvard. Ahead, Siem describes her unique craft. 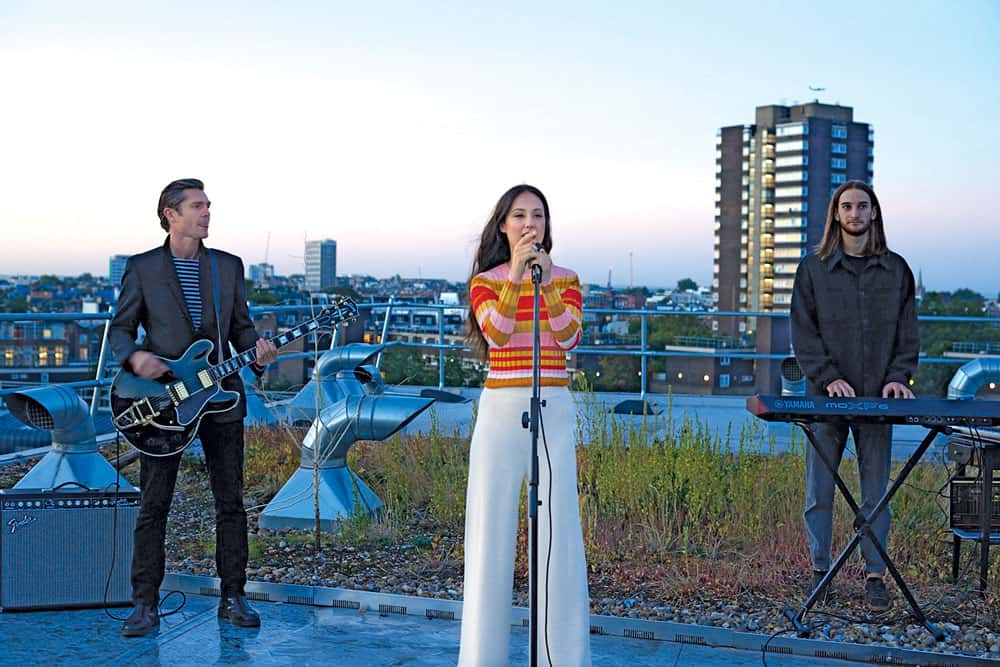 What are your earliest musical memories?
I started playing piano when I was 5 or so, and had a lot of fun playing at the keys. I remember finding practicing quite boring, so I’d start making my own little creations, putting sounds together in ways that made me feel good in my body. By the time I was 11, I wrote my first song I can really remember—a setting of Maya Angelou’s poem “The Caged Bird.” In some ways, I was the caged bird and song set me free. It gave me wings to express myself freely in a way that I didn’t feel completely safe to do in my school environment, which was very strict; we had to behave in a certain way.

How did your passion for music progress from there?
I did lots of performances of classical repertoire. But my songs were a sacred place for me, where I went for joy, pleasure, and resolution of things I didn’t feel like talking about. We all go through big transitions in teenhood, and song was my guide, friend, and oracle. At a certain point somebody, maybe my mom, said, “You should share your songs,” so I shared with some of my music teachers and they encouraged me to study composition, which I did. Bit by bit over the years, my songs fell away and I started a cerebral, intellectually fascinating journey into the history of music, psychology of sound, and philosophy of music—the academic and skillful sides of the composer learning how to write for hundreds of different instruments playing at the same time in an orchestra. My musical life was really enriched, but my songs, which were a life force, an umbilical cord plugging me into this divine existence, was severed. It wasn’t until my twenties that, having reached the peak of supposed success from the outside with my compositions and many awards, I realized there was an emptiness inside. I had to return to song. I said to my publisher, “Leave me alone for a year.” I bought myself a ukulele and wrote my first album. Ever since then, I’ve felt in alignment with what I’m meant to be doing.

Does your eclectic background inform your work?
My mom was born in South Africa but grew up mostly in England. I think of myself as a universal being, but having grown up in London, I think of myself as a Londoner. From my Scandinavian background, the folk tunes influence me, and the land itself sings—when I land in Norway, there is an angulation to the landscape and a kind of mysticism. Then, at university, my mom’s roots in South Africa led to my interest in music from other cultures. I did a lot of ethno-musicology, studying music of the Middle East, Africa, and China, and found the differences and common threads that run through musical practice around the world. I also think of the use of music for marking the journey through life, to celebrate certain events, be it birth, a lullaby, music at weddings, music at funerals—music that brings people together and transitions from one phase to another. 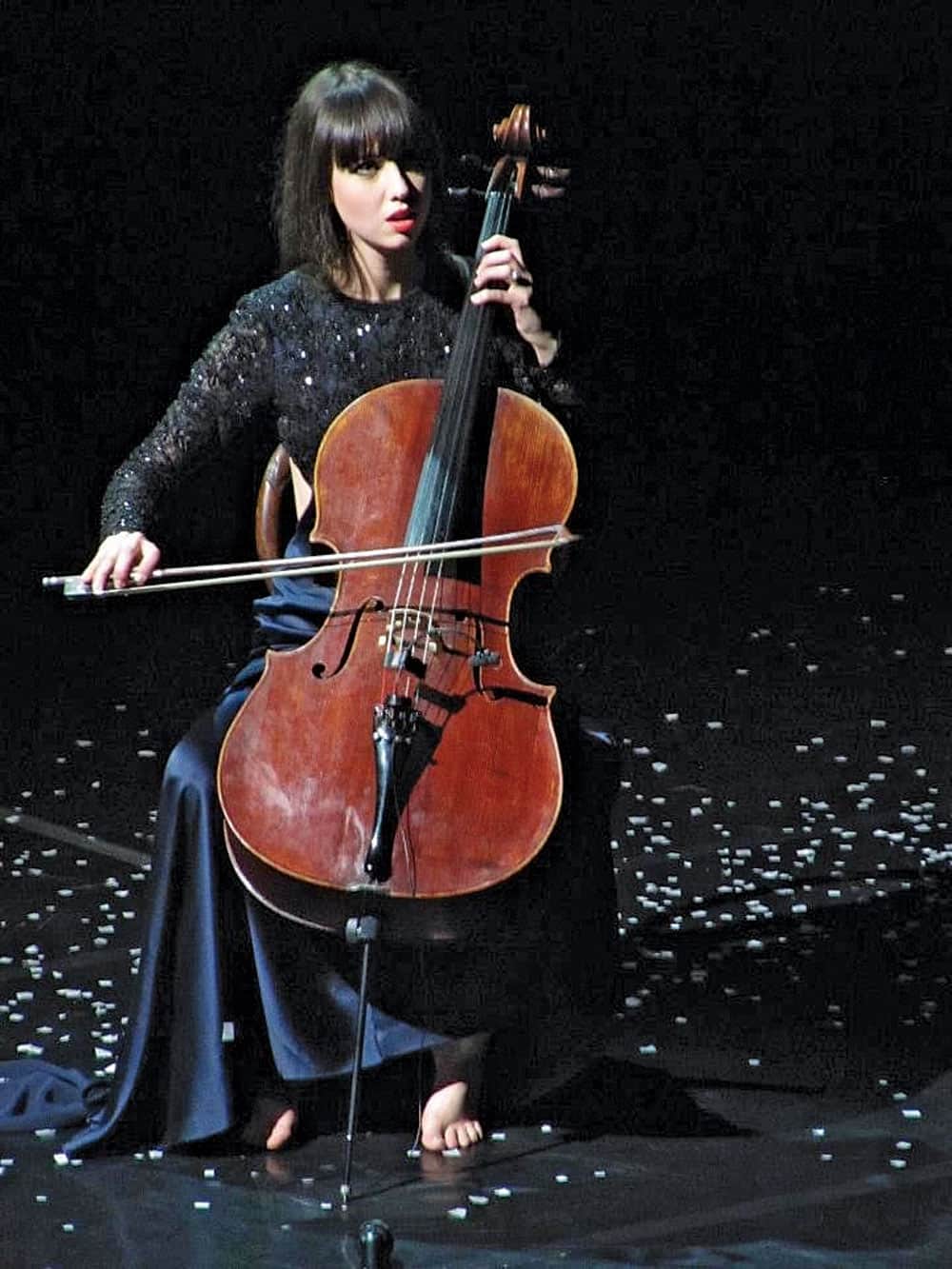 How have your musical tastes evolved over time?
We played a few cassettes on repeat in my mom’s little car growing up; James Taylor, Carole King, Velvet Underground, Leonard Cohen, and Bob Dylan were the staples in our daily life. Françoise Hardy, as well. My grandparents lived in France, which was influential. As I grew and developed my own taste as a teenager, I became equally interested by left-field artists like Björk, who created whole universes, and mainstream pop ballads from Céline Dion, really “heart on sleeve” expressions. At university, I got into ska and drum and bass, the whole culture of using music for rebellion. My taste now is eclectic—R & B, hip-hop, rap, drum and bass, classical, medieval, and healing music.

How were your Cambridge and Harvard stints?
Cambridge was mainly an experience of being able to do it all. I was a party girl. I was almost every night playing in an opera or concert of some kind. Then, I got into studying and I found the thing I was passionate about, so I devoured the library and took risks. I didn’t really care so much about doing well; I just wanted to nourish myself really deeply on everything I possibly could in terms of what had been created musically. That was very freeing. I still look back at that time as a reminder every time I want to pierce through a threshold of what I think is possible. If we can just relax and embrace, we can do a lot more than we think we can. My time at Harvard was mainly influential in terms of the work I did in the poetry department there. I did a joint PhD in music and poetry. I had some fantastic, phenomenal guides there, like Pulitzer Prize–winning poet Jorie Graham. She was such an inspiration, and also had this shamanic presence and embodied the divine feminine. She opened me up to a whole world of possibility. By the end of that time at Harvard, it was a logical conclusion to bring my music and poetry together, which culminated in me taking time out to work on my album.

Did your poetry PhD inform your work?
The alphabet is really just a code for sound-making. Through my studies, I got wrapped up in the word on the page; working with Jorie, I rediscovered the power of poetry spoken aloud and its musicality. It was a natural extension to take that into song writing. I’m as much fascinated by the sound of words as by their meaning. My song-writing process now is very undeliberate. A word or phrase will flash into my mind and I’ll make a note of it in little notebooks; every few months, I’ll go through these notebooks. It’s like I’m asleep but my hands are working as I put the pieces of the puzzle together, and it’s staggering and awe-inspiring to see how fragments fit together with precision. I’m always really surprised by the meaning of my songs. I don’t set out to convey a particular message; the message comes from the subconscious or a divine source. They definitely have an intelligence of their own.

Your brother, Charlie Siem, is also a musician. Did you anticipate you’d both go into the industry?
I wish we’d known—it would have made us a lot more relaxed. We definitely knew it was our passion, but I took a winding path to get there, whereas he really knew from the age of 5 that this was really what he wanted to do. He had a lot of different interests, but he focused on this one pathway. There was always a sense of, “Oh, that’s just a dream. Wow, it can’t be possible.” I suppose it’s pretty cool that we’ve both managed to realize our dreams in some way. Recently, we did a little collaboration. 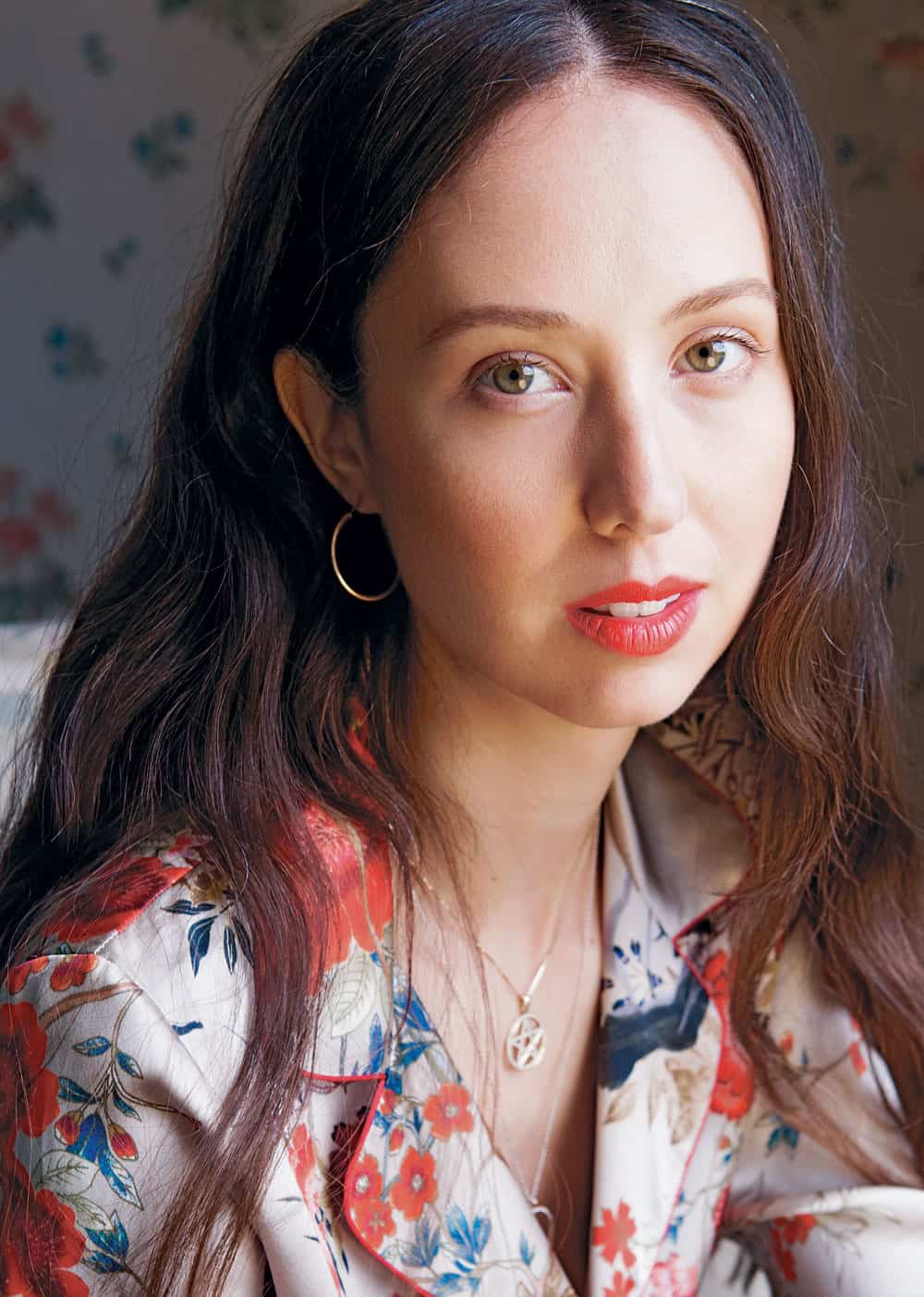 Did your parents encourage this shared passion?
They were not pushy, and that was important. We were surrounded as kids in our music schools by people whose interests were pushed by their parents, and that killed their fire. Our parents respected what we were doing; if we wanted to go away for a week of music-making, they would drive us there. They put in that effort, and there’s a lot to be grateful for. But I think they were also a little surprised. At a certain point, they got a bit worried, especially with my brother; they were like, you’ve got to focus on your studies, but he just kept pushing through and doing his thing.

Tell us about the “show-ups” you’ve done in surprising spaces globally for your new album, Holy?
It’s been so much fun. There’s more of a participatory element than a seated concert hall. You really get to be up close with the audience, and it feels like we’re all together creating this moment. There’s a sense of interconnectedness with the world at large, especially with nature—I love the outdoor ones, because the time of day, temperature, and light all matter. The intimacy of a small concert is, in some ways, more exciting than a large concert—it’s a sacred, special thing with a small audience. I’ve been in the music world for years and have gone to so many concerts, and of course a concert will always transport you to somewhere deep within. But I was just bored of traditional concert halls—though at the end of this stint I think I’ll be happy to go back and play in them. Recently, we’ve done a series in hidden chapels that look like nothing outside, and inside are incredible, gilded miniature spaces. There’s really a relationship between sound and space. Sound creates space, and space also imprints upon sound. It flies in the face of wannabe perfection. I used to be a real perfectionist, and I think it’s embracing life in all its fullness to do those show-ups.

You’ve talked about “unlearning” your formal music training as your career has evolved. How so?
I’d become overly analytical and believed I knew so much, and when we think we know so much we close off the possibility for the joy of discovery and revelation. I had to go back to being a complete beginner, to the feeling of not knowing, to rediscover sound in this bodily, pleasurable way. Now, I can simply hear a C-major chord on the piano and just melt and die inside about how beautiful it is, whereas in my head, after so much training, I’d think, “Yeah, that’s a C chord.” By dropping the labels and know-how, I started using instruments I didn’t know how to play, which freed me. The joy of experience was allowed back.