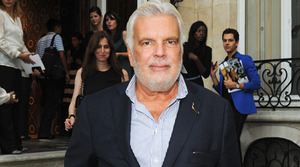 (NEW YORK) Brace yourself for a great industry tale, if you don’t know this one already: Terron Schaefer‘s got a big personality, some primetime airtime, and a plum gig as Saks Fifth Avenue’s executive vice president and chief creative officer. But before he landed at one of America’s biggest luxury retailers, the Brazilian-born fashion industry vet did stints at places like DDB, Macy’s, Harrods, and Warner Bros. We sat down with the creative head honcho for a look back on his illustrious career.
BY PAIGE REDDINGER

You started your career in advertising at DDB [Doyle Dane Bernbach]. Tell us how you got started there.
I was born in Brazil, raised in Argentina, went to school in Europe, and then came to the United States to go to college. I worked in London for Niarchos, the big ship owner. Then I realized I had no expertise in business, so I came back to the U.S. and went to business school. I was in advertising class and this professor talked about William Bernbach being a god. He said he was so principled that when the surgeon general’s report came out about cigarette smoking, Bernbach gave up DDB’s cigarette accounts because they weren’t going to promote anything not healthy. I wanted to work where people have integrity and honesty. So I applied for a job and started to work as a kind of intern acolyte to William Bernbach.

What accounts did they have you working on?
I initially worked on the packaged goods business, but I just hated going to bed every night with a calculator doing all of these reports. So they came to me and said, “Would you like to go to Paris?” I grew up speaking French so I went to work in Paris on Polaroid when it was a $100 million business and also Chanel. For Chanel, I worked with Avedon and Helmut Newton—the best of the best photographers, and the same for Polaroid. Polaroid had amazing access to the world’s most important photographers. Later I was asked by DDB to open offices in Tokyo, Hong Kong and then Sydney.

Where did you go next?
I was approached by the chairman of the board of Federated Department Stores [currently Macy’s Inc.] to come and work and he said he didn’t want anybody who knows anything about retail. I said, “Well, that would be me. I have no retail experience.” But he felt I understood image, style, and glamour.

What was it like jumping into retail?
The first assignment was a Christmas catalogue. I chose Dior over Lands End; the Christmas catalogue was a runaway success. It was beautiful! Denis Piel shot it, and the models were Isabella Rossellini and Andie MacDowell.

What did it take to convince such illustrious folks to get involved?
Nothing, as long as I could pay. They were all new models beginning their careers! I had a lot of contacts that told me who the hot models, stylists, photographers, make-up artists were. We did the Christmas catalogue, which was a huge success, but my boss said, “You cost me my bonus this year, because you’re so far over budget, but you did exactly what I wanted you to do. You created a whole new look.”

How else did you refresh the aesthetic?
They wanted me to just walk around the store and tell them what I’d change. I said, “You’ve got ugly shoes on the ground floor and beautiful shoes on the 5th and 6th floor. Put the pretty shoes where there are more people. For the ugly shoes, make those people travel further into the store.” It was a big success! I thought, “This is an easy business.”

Where did your career take you next?
I went to London to work for Mohammed Al-Fayed, an amazing man who owned Harrods at the time. It was half the volume of Bloomingdale’s in one store! But there were 72 windows, and everyday I’d walk around the store and look at the windows. It was such an inspiring way to start the day.

How did you meet him?
Stanley Marcus was hired to help staff the store after Mohammed acquired it; Stanley was a great friend and champion of mine. I was happy at Bloomingdales with Marvin Traub, but Stanley asked me to come talk to him. On Thanksgiving Day, I took the Concord to London and sat outside Mohammed’s office for an entire day. He never came out to say hello or anything to me. I flew back that night to New York, which made Mr. Marcus crazy. He said, “I can’t believe you came and left!” But it was Black Friday, where everybody in the world is open for business, so I couldn’t be MIA. That’s when Mr. Marcus told me, “Well, he’s now more determined than ever to meet you.”

Did you go back and meet with Mohammed Al-Fayed?
Ultimately, I did go back and we spent the day together. He essentially told me I would accept this job. I asked him why he thought I was right for the job. He said, “You have been as nice to my chauffer as you have been to me. That’s why I want you to come and work here.” I’ll never forget him saying that! So, I worked there for almost four years. Then he fired me.

Why did he fire you?
He accused me of being a spy in the employ of his archenemy Tiny Rowland, a big investment guy who’d once owned Harrods before he lost control. Of course, it was preposterous.

How did you keep yourself busy?
I went to Cambodia and worked as a Doctors Without Borders volunteer. I’d read in The Herald Tribune about all of these doctors that were volunteering to help people who’d lost limbs due to land mines. I spent almost three months working with them.

How did you get back in the biz?
Ultimately, I ended up working at Macy’s after that for six months with Mike Ullman, the chairman at the time, who’s now back at jcpenney. But ultimately it became all about Macy’s being taken over.

So where did you land next?
I went to Warner Brothers in L.A. to work on global consumer products. But it was during the Time Warner merger, so it was a bit chaotic. Then, I had this vision of a website about edited search: I created Style365. The site was the darling of Wall Street for a minute, but nobody knew at the time how to drive traffic to a website. Nobody had taken a full-page ad yet and put it on a website. There were a lot of the right people on board like Bruce Weber, but it was either too soon or too late to catch that element.

What do you count amongst your passions?
Photography is my passion, because I was fortunate to work on Polaroid and on Chanel. Marie Cosindas was highlighted when the MoMA first added color photography to the permanent collection. She was the muse of Dr. Edmund Land, the inventor of the Polaroid Land camera. She gave me a print of two sailors she photographed in Key West: it’s the only B&W print in the world of this famous photograph.

Any other beloved photos you’ve run across?
When I worked with Helmut Newton, he gave me an amazing picture of a stark-naked woman standing beside a pool at night, wearing sunglasses and high heels. I had it in my office at Bloomingdale’s, and they had a complete fit because the model was nude. They said it had to go.

Seriously?
Yes! So Helmut gave me a photograph of Karl Lagerfeld that he had taken to substitute it, that says “Fuck Off” in French. I also have this much smaller picture of Karl standing on the Eiffel Tower, throwing a bouquet of flowers. It was always kind of a joke, but it’s been great!

Which designers are you closest with?
I have a very close relationship with Stefano Pilati. He’s a big talent. I also count Narciso Rodriguez and Francisco Costa as friends.

Are there any up and coming designers that you think are really cool now?
Haider Ackermann, whom we’ve featured in the windows of Saks. He isn’t new, but he’s certainly up-and-coming. Shoe designer Gianluca Tamburini does shoes that are like art pieces: you can switch around the heels. You’re investing in a shank that’s done in the same factory as a Ferrari! The price is in the thousands of dollars, but it’s really collectible. I think he’ll become a big name.

Fashion Star completed its second season. What did you think when you were asked to be on it?
I went out to the West Coast with Steve Sadove, the chairman of Saks, and he said, “I’ve never asked you to do anything of a personal nature for me, so I’m going to ask you to please do this show.” I thought, “Well he’s my boss and my friend. How can I refuse?”

What is it like working with the judges?
You can say what you want about Jessica Simpson, but one night she ripped her bangs off in the dressing room, she held them up, and on the back it said “JS.” They’re part of her Jessica Simpson line. She said, “This is my 27th merchandising license: hair extensions and bangs!” Basically, she’s a billionaire and I’m just an employee. John Varvatos is lovely and Nicole Ritchie is articulate and has her own boho-chic style.

When you first saw yourself on TV, what was that like?
The power of television is something that one cannot appreciate unless you’ve done it. Once I was on Madison and I got out of a cab and there was a very well-dressed older woman waiting for it and I helped her into the cab. Then she rolled down the window and said, “You’re much better looking in real life!” I loved her!

What do you do with your days off?
They are so few and far between; I’m so happy when I have a free weekend! I have a schedule that doesn’t stop. It’s full of shoots for catalogues and newspaper ads. Then you go into show mode in September.

How do you feel about fashion week nowadays?
It’s just becoming harder and harder to get excited about the shows: there are way too many! I don’t know how people who don’t have big transportation budgets manage. Also, the bloggers are always in the first row, celebrities in the second, and retailers in the third. That’s just crazy to me!

Nicky Hilton on Summers in Europe, the...

Burberry to Document the Production of Ad...