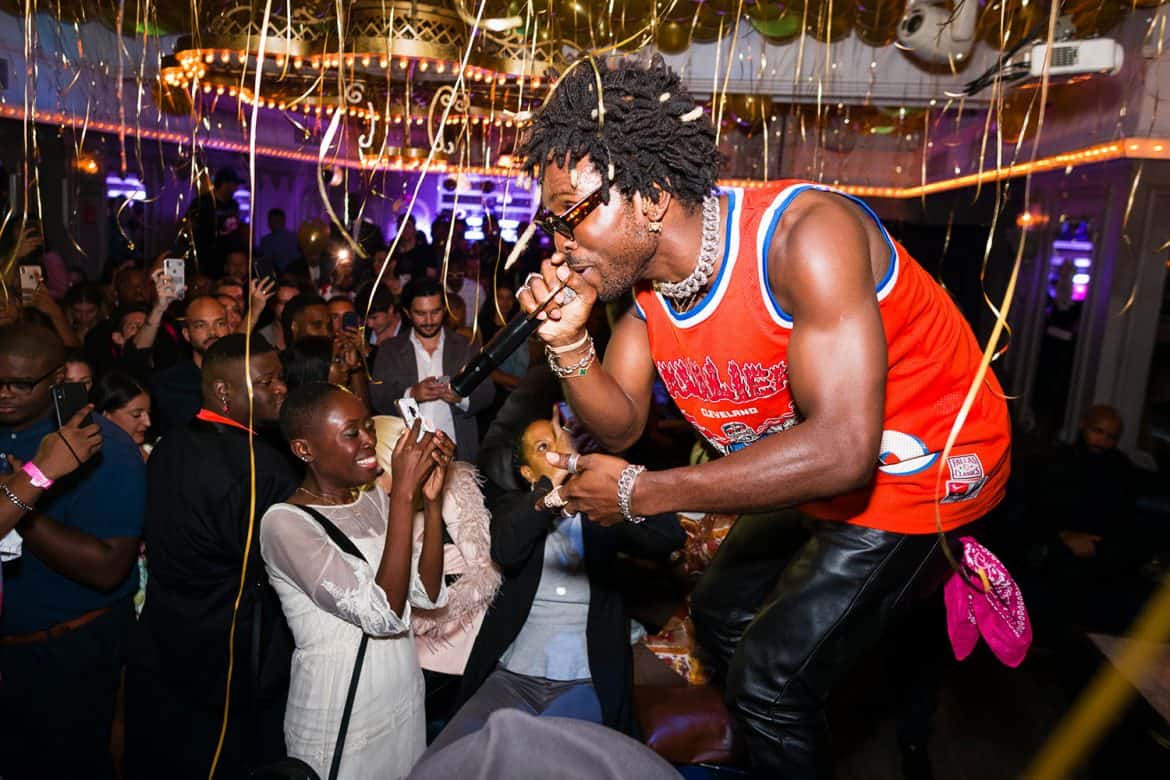 Singer, songwriter, and rockstar athlete SAINt JHN (formerly Carlos St. John) gets in tune with his feelings about fashion, his collaboration with Lenny Kravitz and his feelings about fame. Spoiler alert: He is living the life he wants to live. And he still gets to go to the grocery store.

How did you get started in the music industry?
My brother was a rapper and I just wanted to be like my older brother. So, I saw him rap and then I started rapping myself. That was the beginning of it and then, through hustle and finesse, finesse, finesse! I started putting out records online, just on the internet, and a music executive heard my music. It’s really some sort of Cinderella story. I didn’t get rich though, but I didn’t turn back into a cabbage.

You know how the story goes. It wasn’t a fantasy but I got the little spark. Which is: a music executive heard my record, and wanted to hear more. I came out to LA, he said, “do you want to write songs? Do you wanna rap or do you wanna make a million dollars?” I said, “I wanna explore the other option” and started writing for people.

As a writer, what projects have been the most important to you?
I was happy to be a part of the song, “Brown Skin Girl” by Beyoncé. I think that’s really important! It was a song that needed to be written. I don’t know if that sounds fancy or sounds cool, I really mean that. I was in a room and we were writing songs and that’s the song I wanted to write. It wasn’t because I felt like I was the person to say it, or I knew who was supposed to say it, I just knew it needed to be said. It didn’t exist anywhere.

I would have loved to hear something like this in the future, if I had a child. I thought it’d be cooler to know my child would grow up in a world where a song like this could exist. That’s a really strange thing to think as you’re making a record. And I don’t have kids, I don’t have any plans of it. But to have that as a thought, it’s kinda cool. That’s what sparked it.

Tell us a little about your latest album, Ghetto Lennys Love Songs. Is it true that it was inspired by strippers?
To me, it really felt like if me and a stripper got married. You know, whatever and wherever that wedding and ceremony would be. Whatever that future would entail, whatever type of tumultuous relationship it would be. Maybe it’d be happy. All the great points!

You’ve said that Lenny Kravitz is the G.O.A.T. How did you get your nickname, Ghetto Lenny? How did you come to work with him?
Because I don’t play the guitar. People had already called me Ghetto Lenny long before I met him. So when we met, he’d known that. We met in Paris at a Chrome Hearts party. It was Paris Fashion Week. He’d heard a song of mine that was unfinished, that I thought he would be cool on. He liked it [and] said he’d love to be a part of it.

But we decided to do it in the most honest way, which is really collaborate. And I said, that’s all I ever wanted. That’s all I could ask for. So we did that — we really collaborated, really came together. We worked on it through the middle of the night, two days straight. He’s more than a musical idol. He’s somebody that personifies things that I believe in, the place that I come from, something I represent. I think we walk in the same steps, so to speak. 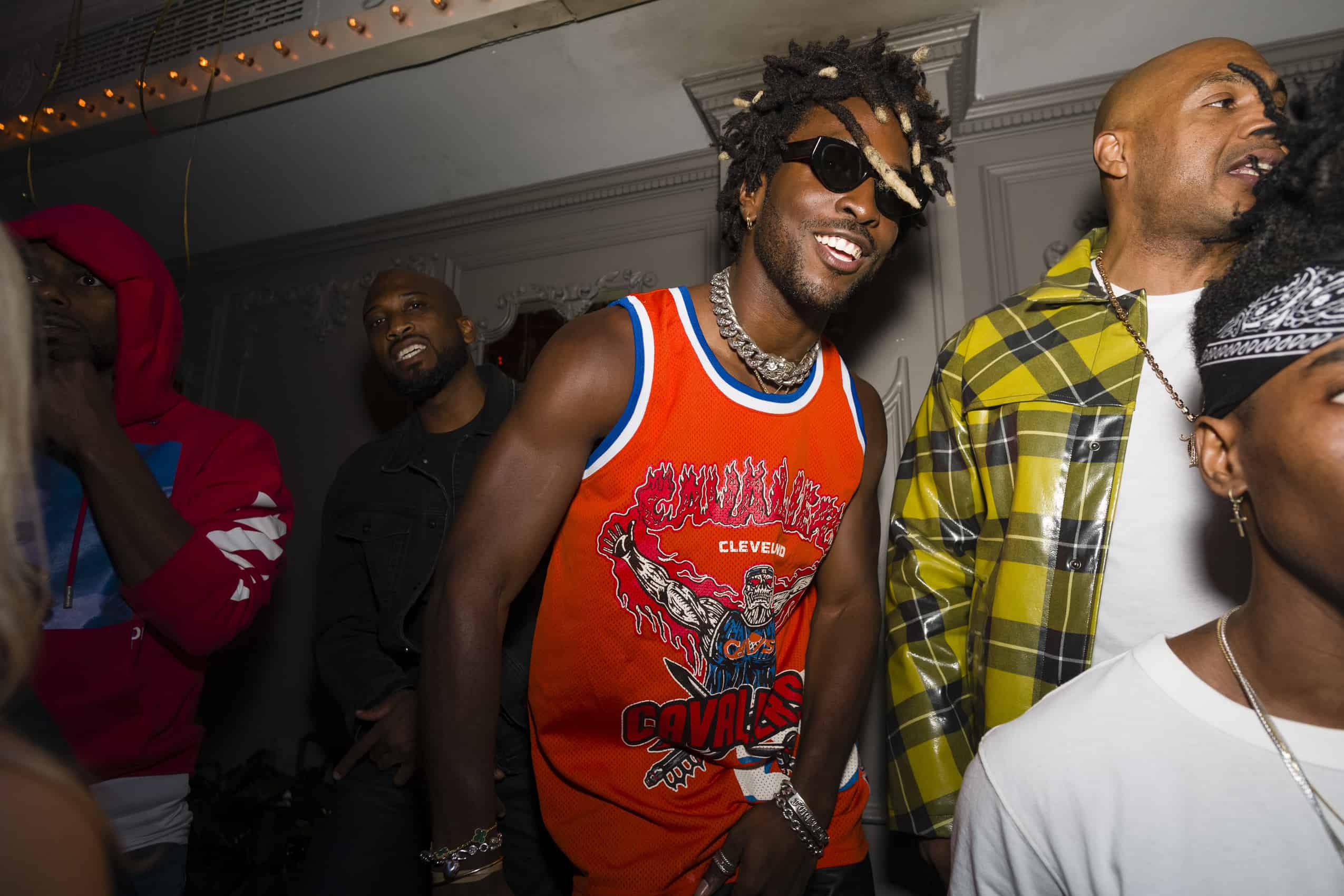 Many people you’ve worked with say you have the work ethic of a professional athlete. How do you train for your craft?
I’m doing it right now. This particular tour is called the Ignorant Forever Tour, and I want to make sure that I can give you every possible thing because I’m in the peak of my life. What I mean by that is, I feel more alive than I’ve ever felt. I feel more connected than I’ve ever felt, more honest than I’ve ever been. This is it! I’m in the middle of my life. At any given point when you stop me, I’m in the middle of my goddamn life! I wanted to be better prepared for this tour.

I’ve never really worked out. I’ve done it in small moments, but I wanted my endurance to be Michael Jordan endurance. I wanted to show up, do my show and then ask, is there another show I was supposed to do tonight? I like being the last person to bed and first person to wake up. When I look at my team and I go, “Y’all ain’t working hard enough,” I want to have the bandwidth to talk like that. I want to have the confidence in my work ethic to talk crazy. The only way you can be great is that you gotta want it that much. Whatever it is. I want it that bad. This is it. Music is my sport.

Do you have any rituals before going on stage?
I like quiet before I go on the stage. I don’t like new people and strange energy around me when I’m about to go on stage. I’m about to go give my all. I’m about to go talk to a crowd of people that I’ve never sat eye to eye with and tell them everything I believe in. I want to know what I believe before I go out there. I don’t want anybody corrupting my ideas. So, I just wanna sit still. I’m not superstitious but I’m not splitting the pole anywhere. Because even if I don’t believe it, why stack the odds against myself?

Do you remember the moment when you felt like, “I’ve made it.”
I still don’t feel like that. I’ll be asking myself all the time, what does this word mean and what does that word mean? What’s the value in it? Sometimes I’ll go somewhere and I’ll hear people throw around words. I’ll hear a girl screaming outside of the show, she’ll say, “Oh my god, it’s SAINt JHN!” Maybe she’ll say I’m “famous,” right?

I hear words like that and I think to myself, what does that even mean? And what’s the metric now? What are the new rules? How do you even achieve whatever y’all talking about? You’re famous or you’re not. In my mind, that used to be something. And it doesn’t mean anything so I don’t even know how to qualify or quantify whether I made it. I just know I’m living the life I wanted to live. And I still get to go to the grocery store.

Let’s talk fashion! Describe the look and vibe you are going for while on tour.
For the tour I’m wearing a lot of silks, leathers, and furs. I like to play with textures. I like things that are pretty and delicate. And I like to make it masculine. So, all my silk shirts button on the left side. All my silk shirts are blouses. I believe in unisex items, I don’t think an item should be sexually specific. We get lost. I can’t express myself the way I want to. So, deliberately all my shirts button on the left side. Floral, non-floral, aggressive, skulls, mosaic prints, it’s all on the left side. What does it look like when you see me in it? It’s just beautiful, right?

Beautiful is genderless. It’s just perfect. I want to be able to archive things in the future, to go through the museum of my tour wardrobe. I want you to be able to live in this moment, to be able to walk through my house or museum or somewhere and go, “Oh! That’s what he wore in London in 2017. That was the outfit, I remember that jacket.” I want that experience. I use the stage as my runway platform.

I read that if you see an incredible shirt, you say, “that’s a hit song.” Explain what you mean by that.
It’s just how I translate it for myself. Because music is my sport so wherever I live, where my home is, everything is five miles, two miles, three miles from home. Home is my center point. Home is where I live. Everything is just adjacent to my house. If music is my sport and fashion is an accent to music, it’s a mile away from the block. So when you hear me say, “that’s a hit song”, that’s because I’m relating it to where home is.