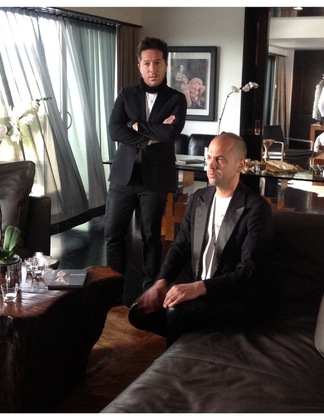 Brian Wolk and Claude Morais of Ruffian are back with another adventure from their glam life. This time, the boys journey to the West Coast for a few star sightings, some nuptials, and a penthouse party. They’ve documented it all for you. Without further ado…

“Beverly Hills, California was formally established in 1906 and named after its incorporators’ hometown of Beverly, Massachusetts. Originally, the property was used for oil drilling, but when the owners discovered there wasn’t enough oil to exploit commercially, they turned to the next best thing to exploit, Hollywood. The First tinsel town pioneers of  ‘The BH’ were Douglas Fairbanks and Mary Pickford, the Branjolina of their day. Pickfair, the mythical mansion they built together, was described by Life Magazine as “a gathering place slightly less important than the White House, but much more fun.” Fast-forward 100 years…enter the Ruffians!

A trip out west is always a treat for us Ruffians. When we when we found out our dear friends Carlton Dewoody and Sarah Connolly were getting married in Beverly Hills, we decided to make a week of it. When in Beverly Hills, there is only one place we want to be, and that’s the Thompson Hotel. Its late 6o’s inspired décor makes us feel like James Bond. Speaking of 007, after checking into the incredible penthouse, we headed up to our rooftop cabana, ordered martinis (shaken, not stirred) and called our very own Bond Girl, friend and actress/model extraordinaire Lydia Hearst, to go over some last minute details and wardrobe for the Ruffian party she was hosting for us later that week.  The rooftop pool was buzzing with Hollywood glitterati, most notably the handsome Ryan Phillippe whose cruel intentions unfortunately did not include us that afternoon. After sufficiently baking, and noshing on grilled artichokes with truffle aioli, we headed back to the Penthouse, did a quick photoshoot of Claude in his bikini, (see photo Gallery) showered, (each in his own glorious marble bathroom!) and headed out to the farmer’s market with our West Coast Brand Manager Dayna Zegarelli to stock our kitchen with our favorite goodies for the week.

Sunday was Funday and there is no place more whimsical in Beverly Hills than Dawnridge, the estate of Tony Duquette, which set the stage for the post-nuptial Cinco de Mayo brunch of Carlton & Sarah. As the mariachi band played on a Japanese Pagoda across the koi pond, we surveyed the extraordinary property where more is more. A designer of film and theatrical sets, movie star mansions, gardens, furniture, costumes and jewelry, he was also a conjurer, magically transforming plaster, paint, industrial materials, shiny discount store wares and mirrors into dazzling sculptures and exotic tableaux inspired by the storybook fantasies of his youth.  With all of the day’s visual stimulation, it was a pleasure to retire for the evening in our modern penthouse and loll on the Mies Van der Rohe chaise lounge overlooking the hills from our terrace and the Steven Klein photos on the wall.

With the wedding festivities over we were back to work, and there is nothing we enjoy more than meeting the women we dress. Satine is one of our favorite stores in L.A., and the owner, Jeannie Lee, is definitely one of the chicest ladies we know. Her unique ability to mix uptown with downtown and serve it in a fresh new way is what keeps her loyal customers coming back season after season. We spent the day at Satine on 3rd Street observing the master in action, dressing all of our LA gals in the newest Fall 2013 Collection.

Tuesday had finally arrived, the day of our big house (or, rather, penthouse) party! Audi’s had been arranged for our VIP’s, the catering was taste-tested and approved, and us Ruffians headed to the Robert Vetica Salon for buffing in true movie star fashion. The concept of our event was to bring a N.Y. apartment party to L.A. We have always been struck by the idea of voyeurism in hotels, and we thought it would be fun to let our L.A. friends discover the collection in various parts of our suite. We filled the many closets with our collection. Also, we left some of our more naughty items, like bras and miniskirts, strewn in the bathroom and laid on the bed. Speaking of naughty: nothing gets the crowd going like Casamigos tequila cocktails courtesy of our favorite Hollywood heartthrob, George Clooney!  As the space filled and the crowd mingled, we spotted some of our favorite Ruffian gals including Rose McGowan, China Chow, Lauren Harper, Jillian Murphy, Bonnie Somerville, and Hannah Ware. As if on cue (it is L.A., after all) Lydia [Hearst] entered the buzzing party and parted the crowd like the Red Sea. Her seamless elegance and California provenance made her the perfect host for our L.A. debut. Later that evening the gals all joined us for a late supper downstairs at Caulfield’s. The Americana bistro-inspired menu was the perfect continuation of our east coast/west coast Ruffian exchange weekend. As we nibbled on our lobster clubs and shared bites of New York strip steak, we quickly understood the buzz surrounding this impeccably-decorated eatery.  As the clock struck midnight, in true silver screen fashion, we headed back up to our terrace, drank champagne and stared in awe at the incredible stars above, in, and around Beverly Hills.