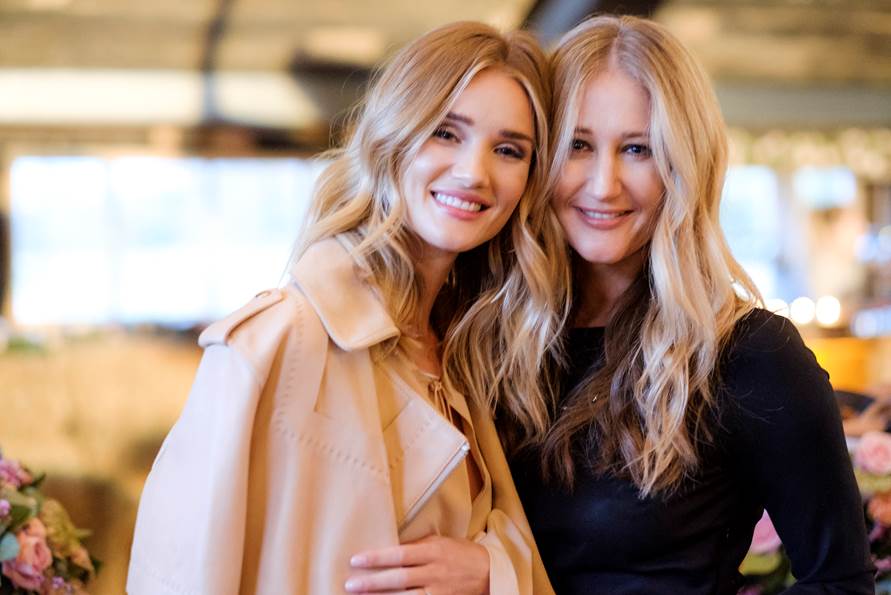 Model and actress Rosie Huntington Whiteley recently added global women’s ambassador to her repertoire when Ugg came calling. We phoned the Brit turned California dweller (who celebrates a birthday today—happy birthday, Rosie!) and Ugg’s global communications lead Alice Hampton about the partnership which, from our chat, sounds a lot like a friendship.

How did this partnership come about?
Rosie: Alice and I  met each other just before Christmas, and we chatted about my first memories of Ugg. I’ve owned a pair of Uggs since I was 16; I bought my first pair when I started modeling and got one of my first paychecks. They were the thing that I wanted to spend my earned money on. I remember that feeling so well, when you save up for something and you’re waiting by the post every day for it to come. At the time Uggs had really hit the world and all of my favorite stars and style icons were wearing them. It was one of those moments where I felt very on-trend. I’ve owned a pair ever since. They’re part of my staple, off-duty wardrobe. I have an attachment to them in a very personal way, versus a pair of killer heels…which I also have a personal attachment to. [Laughs] I guess there’s a much more homey of side to me, and a relaxed, laid back part of my life.

Alice, why was Rosie a good fit?
Alice: I joined the brand about 18 months ago, and when you start a new job you give a lot of thought about the brand. I remember saying that we need a global women’s ambassador. The only person that came to mind was Rosie. I had seen her work over the years with Australian companies. I always admired her style and her effortless elegance. She really possesses what it means to be a modern day classic beauty. When Rosie and I met at Soho House in LA, it was fate! We just bonded. She honestly is so kind and warm and humble and funny. We just got back this week from an amazing trip to London where we had the global announcement. Everyone is just in awe of her. When you meet her, you see why we have this deep connection.

Rosie, how was the trip to London?
Rosie: I’ve been working for 13 years this May, and I can honestly say this was my favorite work trip. It was really meaningful because we were in the English countryside, where I spend a bit of my personal time. It was touching to see how excited all these editors were about the new partnership; 30 editors came in from 10 countries. That really shows how Ugg has an enormous global reach. There aren’t many brands that can translate from country to country.

What’s Ugg’s tie to Australia?
Rosie: Ugg is an American brand, but when I first met with Alice, I thought it was an Australian brand! The headquarters are in Santa Barbara. Ugg was started by an Australian surfer on the West Coast of the US, about 37 years ago. He designed these boots for surfers to warm their feet when they get out of the water. I guess that’s where the confusion comes from.
Alice: It was called Ugg Australia up until February 1, when we changed it to Ugg. The heritage started in Australia because it was an Australian who started it. But we are a globalized brand.

Do either of you surf?
Rosie: I’ve tried! I grew up body boarding, and in Malibu I do a lot of paddle-boarding. Surfing isn’t something I’ve quite cracked the skill of, but I’m always up for the challenge of giving it a good go.
Alice: Growing up in Australia, it was one of my subjects in high school. It’s hilarious when I think back at it. I’m terrible. We spend a lot of time out on the water, though!

What are some of your favorite beaches?
Rosie: I spend most of my weekends in Malibu. It reminds me a little bit of Devon, England, where I grew up. My summer holidays were spent in the county below, Cornwall. Cornwall has a similar feel to Malibu, that rustic, sleepy, surfer town kind of vibe. It feels like a home away from home. I was recently in Thailand over New Year’s for my holiday, and that has some amazing beaches as well. Pretty much any beach I’m happy to be on!

Where are you off to next?
Alice: We’re thinking of doing a trip to Japan later this year to do a special event for the APAC market. Not everyone could fly to London for the event. It’s going to be really special and really fun…follow Rosie on Snap Chat!
Rosie: We’re yet to actually shoot the campaign. I’m so excited about it because it’s a little bit different for me, and a real opportunity for me to showcase my personality and playfulness, which is not always a side that you get to show as a fashion model and as an actress. I’m thrilled by the prospect of going to Tokyo…it’s one of my favorite places in the world. It’ll be my second favorite trip of the year.
Alice: This is the first time we’ve signed a global women’s ambassador and it’s such a proud moment for the brand. It really speaks to Ugg’s meteoric rise and global reach. We’ve got some really interesting things ahead for the brand as it continues to evolve. We’re not just about the boot! We’ve got lifestyle and home product—we want to take that comfort equity and spread it to many parts of people’s lives.