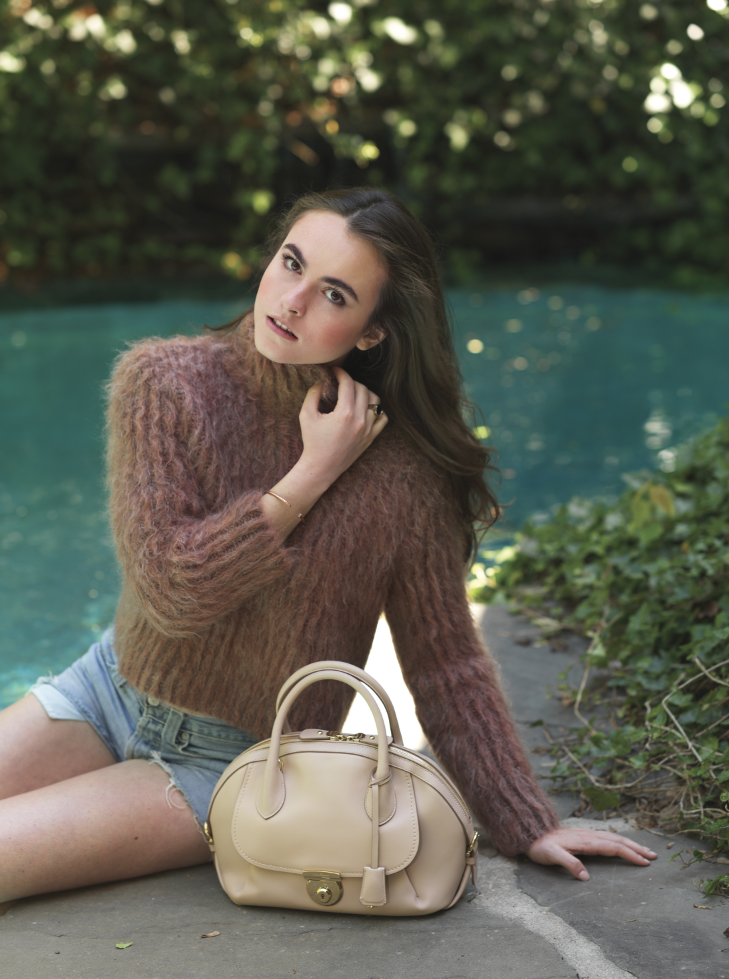 The Italian stunner (and bona fide princess) Melusine Ruspoli has landed her first Salvatore Ferragamo campaign. So how will she celebrate? By spending her summer in the Hamptons, of course. BY PAIGE REDDINGER

Welcome! What are your impressions of the Hamptons?
It’s really American here—it’s like being in a film where everything is really nice and the homes are like dollhouses. Everything is perfect! In Italy, everything is much more rustic.

Have you been enjoying the nightlife?
I’ve been to a lot of house parties in East Hampton and Southampton. I’ve also been to Montauk—Surf Lodge and Navy Beach.

Have you done any shopping?
No, I don’t have time. I prefer to go to the beach!

What do you like to do when you’re at the beach?
Just relax, be with friends, and stay together and have a good time.

Are you a swimmer?
I like to go in the water when it’s really hot outside. I like to do sports. I don’t surf, but I wish I could.

Do you play any sports?
I used to ride horses, but now I swim and run a lot.

What do you love about the Hamptons?
I like the fact that we’re so close to the city and we have a little paradise.

Thoughts on our beach attire?
Americans wear too many clothes!

Where do you vacation?
We have a family castle near Rome called Castello Ruspoli in Vignanello Viterbo, and we spend a few days with all the family there. And usually, I also go to the South of France, then I go to Capalbio, Capri, or Panarea. Usually we go there with a lot of friends. There are no electric lamps, and there are really cool places to go at night. During the day you take these little boats and you go in the sea and there are spots where everyone meets. It’s really cool.

What was your reaction to being cast in the Ferragamo campaign?
I was really happy, especially because Ferragamo is an Italian brand, and I am really proud to represent a brand that has tradition. For me, this brand means a lot.

What was the first Ferragamo piece you ever bought?
The Varinas. They took inspiration from vintage shoes and then made them new—and they’re also the brand’s best seller. Now I’ve discovered the Fiamma, and it’s a really cool bag. It’s timeless—you can wear it however you want.

Who are your fashion icons?
Coco Chanel; Karl Lagerfeld, because he knows how to manage different brands; and Wanda Ferragamo. She’s 90 years old, but she’s still in the office every day.

How do you feel about your princess title?
In America, people are really amazed by it. I have to say, it’s helped me a lot. In Italy, it’s more common. I have other friends who have titles, so we don’t care as much about them.

We heard you attended the Bal des Débutantes in Paris…
It was like being in a fairy tale! I met girls from all over the world. I also had a really good time trying on dresses, because every girl was trying to represent a brand.

What did you wear?
Chanel.

What’s your earliest fashion memory?
I’ve been obsessed with clothes since I was little. I was always going in my mother’s closet, but she would never let me borrow anything. Now, I take some of her things when she’s not there, and I put them back nicely like nothing has happened. But my mother is a perfectionist, so sometimes she notices that it’s been used and then it’s a disaster.

Do you have sisters?
No, but I have four brothers.

How would you describe your style?
Easygoing and classic, but it depends on the occasion.

Are you in school?
Yes, I’m going to Istituto Marangoni, a fashion institute in London where I will study fashion business.