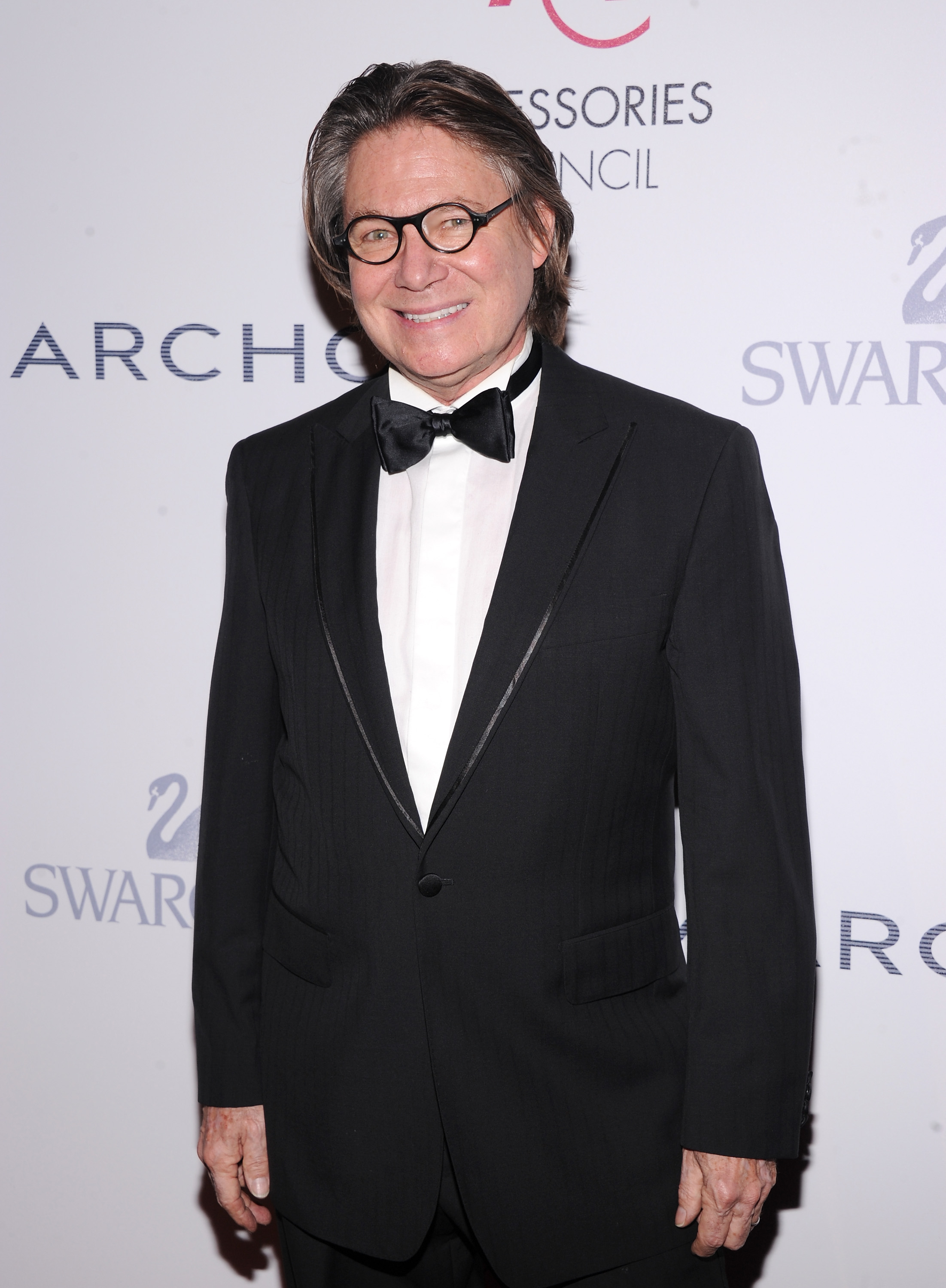 (NEW YORK) Jewelry designer and artist Robert Lee Morris has been crafting his unique designs since he first began his carving out his career on a commune in Wisconsin in the ’70s. Since then, he’s worked with everyone from Donna Karan and Calvin Klein to Karl Lagerfeld. His work has graced the pages of Vogue and Harper’s Bazaar and his wearable art gallery, Artwear, was known as an incubator for up-and-coming jewelers that were part of the era’s art meets jewelry posse. After a brief dip into the realm of fine jewelry, Morris is back where he started, creating the sculptural metal masterpieces on which he built his name. We caught up with Morris at his Manhattan studio for a walk down memory lane…
PAIGE REDDINGER

How has the jewelry industry changed since you started?
The industry has had to reinvent itself over and over. One year, it’s all about platinum and white metals, and then all of the sudden something happens in the world and everyone turns to gold. Then, copper stone jewelry suddenly has a big resurgence, because silver is too expensive. I’ve watched trends shift for the last few decades. I’ve tried to stay firm, holding onto the railing of this crazy ship.

How would you describe your aesthetic?
I’m not a fine jeweler in my heart. I’m a designer and metalsmith. I’m definitely a fashion-oriented producer of bold, large-scale things that shouldn’t really be made in precious metals unless you’re building something for an heir or king of a country. I realized that if I continued to make big, bold things out of [precious] metals, very few people would be able to afford it. Costume jewelry is really where I feel most comfortable.

You’re also a sculptor. How does that influence your work?
I don’t see any difference between the two. My mentor in college was my sculptor professor and he taught me how to do every technique possible to create three-dimensional forms. In his spare time, he would make jewelry in his office and he was a very burly guy with a big beard and a pickup truck from Athens, Georgia. He was a true artist. Like Alexander Calder, everything George did looked like George whether it was a sculpture, painting, or piece of jewelry.

Did you start making jewelry in addition to sculpting post-grad?
After college, I started a craft-themed commune in the cornfields of Wisconsin. An abandoned farm was given to us by the owner on the condition that we’d fix it up and make it somewhat livable. There were 12 of us. We each chose a craft. I chose jewelry, because I was inspired by [my old professor] George. He’d smoke a cigarette with ashes dripping into his beard as he welded jewelry that looked like armor. He made jewelry with big strong pebbles and set them in hammered prongs. I’d never seen jewelry like that before.

What did your first jewelry pieces at the commune look like?
They were tribal, strong, graphic pieces that had a futuristic flavor, but also looked like they could be thousands of years old. I began to sell things right away to a craft store; that was instant gratification. They were only $5 to $10 apiece. I got a lot of great feedback and I developed my own techniques; I barely read books on making jewelry.

Did you have any habits during your early days designing?
I used to smoke like crazy when I was designing. When I design I go into a state of flow where I don’t know if I am hungry, tired or anything; I’d chain smoke and listen to music the whole time.

What would you listen to?
While I was teaching myself to make jewelry, I’d listen to Led Zeppelin’s “A Whole Lot of Love” over and over again. I would hammer to it and go into this ecstatic state. It was the sexiest song when it came out. That music was embedded into the jewelry.

What was your big break, beyond the commune?
I was discovered at the Putney Craft Tour in Vermont. A couple was very interested in my work and the lady bought one of my most expensive pieces, which was $75. Her name was Joan Sonnabend and she worked at a leading gallery in Boston. The couple also owned The Plaza hotel and the Sonesta hotel collection and were in the process of opening a gallery called Sculpture to Wear in The Plaza Hotel for jewelry artists. As soon as they saw my work, they wanted me to be a one-man show. They said, “We’re going to make you famous.” I walked out stunned—and I moved to New York shortly thereafter.

How was your work first received in New York?
The next thing I knew, I had the cover of Vogue and spreads in Harper’s Bazaar. I was part of the birth of this new field called artist jewelry. There were four or five of us that were part of this designer jewelry [movement] that couldn’t be classified: Elsa Peretti, who decided to go to Tiffany’s, which has been great for her, and Angela Cummings, who did rings for Tiffany’s. It was a big break from estate, bridal, or plastic jewelry. It was the beginning of a very huge era, a golden time for everyone. Studio 54 was hopping. I was pulled into that whole scene, with Andy Warhol and the beautiful dancing people.

What happened after Sculpture to Wear closed in 1977?
I created a wearable art gallery called Artwear, it was for people doing what I was doing, who needed to be managed and given a platform to show. I would bring in artists and even if their work didn’t sell, I would keep it on display, no matter how we did financially. Designers and architects flocked to Artwear to absorb my artists’ originality.

You’ve done jewelry for Donna Karan’s shows in the past. Who else have you collaborated with?
I used to work simultaneously with three to four fashion designers. I won the Coty award for Calvin Klein, which really put me on the map. I also worked with Kansai Yamamoto. My collection for Geoffrey Beene was so strong, it got all of this attention from leading fashion journalists. One of them said that the Geoffrey Beene collection didn’t come alive until the Robert Lee Morris Jewelry collection came out and yet, Mr. Beene neglected to give me any credit on the program. The journalist was so anti-Beene that he banned her from any more shows. That journalist said to me, “You have to see this amazing Japanese designer, Kansai Yamamoto: he did all of David Bowie’s clothes in the beginning, all of the big Kabuki looking things.” I ended up working with him for three to four years straight.

What was it like working with Kansai Yamamoto?
After the Paris shows, we’d go to some exotic place like Venice or Ireland or Santa Fe…or to Gator World in Florida. I remember some very romantic moments, like when we arrived in Venice on a stormy night and got to the bar at Gritti Palace, there was Claude Montana, Thierry Mugler, and Karl Lagerfeld. I was just mystified by the world I’d gotten into. Everything was moving so fast. I was making hair accessories and hair ornaments that were jewelry, but not really jewelry. I would make them in quantities, because Kansai would send out models all at the same time wearing the same accessories with variations in the clothing. It was a lot of work, but it was like going to the school of life and graduating in a year.

And you began working for Donna Karan after that?
Yes, eventually Donna Karan called me and asked me if I could come over and help them at Anne Klein, because they had lost their jewelry designer. When Donna started her business in ‘85 she asked me if I wanted to continue to work with her. When Donna launched her collection with black stretch jerseys and my bold, gold jewelry, it was this very influential American sportswear look.

Sounds busy!
At the same time, I worked with Karl Lagerfeld as he introduced KL Sportswear in New York, there was another designer marginal designer I worked with, and there was Donna Karan. I tried to keep everything functioning at the same time. Then, there was an explosion of success over Donna’s first collection; it was just a rocket launch. I did collections for her back to back for seven years. FinalIy I was like, “Wait, I have a life and brand of my own.”

What did you do after that epiphany?
I had to go see what else there is in life. I went off to New Mexico and bought this 650-acre ranch where Georgia O’Keeffe used to live. It was such beautiful, magical land. I thought I’d become a jewelry designer in Albuquerque. But I ended up falling in love and getting married to one of the girls from Donna Karan. She didn’t want to live in New Mexico, so I stayed in New York. Then, the president of Donna Karan, John Idol, asked me to do an international license for Donna Karan’s fine jewelry. I thought that could be fabulous: just huge stones and big graphic pieces.

Who ended up doing the international license?
I called around to see who might help manufacture it—I called Fabricant, one of the largest privately owned NYC diamond companies. They said, “We’d love to partner with you, because we know that designer jewelry is the way of the future. You could be our Michelangelo and we could be your De’ Medici family.” I thought, “Wow, that sounds really good.” They bought the brand and I was then free to do nothing but design. I was working in platinum, South Sea pearls, 18-karat gold, and diamonds and then at the same time doing silver for QVC and my regular jewelry. My identity began to go crazy, because people said, “Are you a fashion jeweler, a fine jeweler, or what?” But I kept winning awards from the fine jewelry business, which made me think maybe I belonged there. But the products were too expensive. I wanted to see my work going more places.

What has happened in the last few years?
I guided myself towards Haskell Jewels in 2011 and got away from my other partners and got them to sell the brand to Haskell. Now I’m back where I belong in the world of big, bold fashion—and I’m not worrying about gold and diamond pricing. I’m all about knuckle rings; that’s really my brand driver. I think diamonds would screw it up.  For decades, I’ve continued to ask myself, “What’s my goal and purpose?” I want to take this direction that I just started and blow it out into home, wall, and sculptures; I just see going beyond the marketplace and breaking new ground. If you don’t break new ground, then you aren’t really an artist.