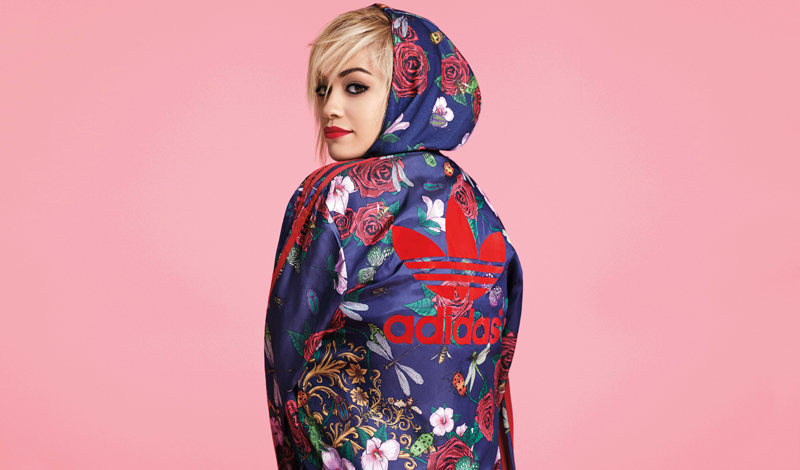 Adidas has tapped another big name for their Adidas Originals line. Rita Ora has been brought on board to do a three season collaboration under Rita Ora x Adidas that will debut with the Fall/Winter 2014 collection. Ora follows in the footsteps of recent artists and designers like Pharrell and Mary Katrantzou and ongoing collaborations with Raf Simons, Yohji Yamamoto, and Rick Owens. The 23-year-old chart-topping British singer has not only been making waves in the music scene, but has also been breaking out in the fashion world most recently, as the face of DKNY ad campaigns. The blonde haired, red-lipped singer’s looks and personal style have been gaining attention for some time; her latest project with Adidas will include apparel, footwear, outerwear, and accessories following in the vein of Ora’s own style and will range from $30 for a beanie to $500 for one of the brand’s iconic track jackets.

The collection will roll out in five phases, starting with the “black” line on August 21st followed by the “Pastel” and “Colorblock Packs” lines on September 4th, and the “Spray” and “Roses” lines on November 1st. The “Black” line will be sold through Adidas Originals stores and the brand’s website. “I have always been a fan of Adidas Originals and respect what they stand for in their fearlessness and originality,” said Ora in a press statement. “I worked very closely with Adidas Originals to put a personal touch in every piece with connections to my music, my career and my life. I’m really proud of the collection and beyond excited for my fans to get their hands on it!”

If I’m not mistaken, Missy Elliott, who created a line with Adidas in 2004, is the first female artist to collaborate with the brand, not Rita Ora. As usual, Rita Ora’s importance as a cultural figure has been exaggerated once again.

Do you mind if I quote a couple of your articles as long as I provide credit and
sources back to your weblog? My blog site
is in the very same niche as yours and my visitors would definitely benefit from a lot of the information you present here.
Please let me know if this alright with you. Regards!