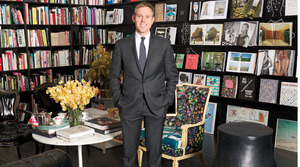 (NEW YORK) Since 2005, Chandelier Creative founder Richard Christiansen has been churning out some of the most inventive and ambitious campaigns in fashion. Bergdorf Goodman, Old Navy, and Moda Operandi are true believers. Are you?
BY EDDIE ROCHE

You grew up on a farm in Australia, right?
I did. My parents are hardworking farmers in a quite remote part of the country. They started with avocados and then moved to sugar cane and tea-tree oil. There was a time when farming subsidies went under and the only way they could keep the farm was to seduce Japanese tourists to come and fish for crabs in their river with crab traps.

That’s different!
My twin brother and I would come home from school and put crabs into the traps so the tourists thought they had caught them the next day. We were putting on a show, and that’s what we’re actually doing now with my business. Putting on a show for people, not sell them a product.

What does that entail?
People need to tell stories about products and around services that are engaging and make you want to hear more, learn more, and get involved, as opposed to just saying, ‘We have this sweater; it’s $50.’ That sounds easy, but it’s not.

What made you decide to launch Chandelier Creative?
The Internet was booming; people were looking for content. We started working in my kitchen for probably six months. Then I got a job from Nordstrom. I knew someone there very well, and they wanted to come to New York and see the office to make sure we could handle it. Problem was we didn’t have an office. We took an empty space on 21st street that we rented, and we bought desks from a flea market and painted them all black. I found all these guys on Craigslist to sit at the desks and type and pretend that they worked there.

We didn’t have enough outlets, so the computers were all facing the walls so you couldn’t see that the screens didn’t turn on, and the cleaner was outside dialing the phones to make sure the lines were always ringing. We were faking it until we made it. We were at that point where we had no more money left, and we would have closed down had we not gotten that job. We got the job, and it went onward and upward.

Did you keep the actors?
No! All the people working in the office now are real employees. I had never run an agency before. We just hit the ground running.

What was Chandelier trying to do back then? What was the business plan?
We were sort of knocking on doors to try to pitch against Laird and Lipman and Lloyd. We were, and still are, the new kids on the block. We had all come from print backgrounds, fashion magazine backgrounds, so everyone was fast and knew the cadence of stuff. I always hire people from magazines—they’re fast and they know about storytelling. We came out of the gate and started talking to big brands that we thought needed a sense of fun, from Old Navy and Target to all the big department stores. In the early days we had a really hard time competing against the bigger fashion agencies. We really needed small fashion work. We were taking any job we could get that had fashion, beauty, or retail and just building it into our book.

What would you say your specialty is?
At the core it’s this idea of a wink, and it’s manifested in different ways. We had a pitch today for someone with a really big, generous budget, and there were seven other agencies there. I’m sure they came expecting us to do a million-dollar photo shoot with one great big model and call it a day. Instead, we came at it in a totally different way. We came in and ripped the whole thing apart and tried to approach it differently

Are you full of ideas?
I’m really curious and really impatient.

For what?
What’s around the corner. I’m always embracing change.

Your office is filled with old books and teacups. A bit old-fashioned for a futurist, no?
They represent a backstory. You’ll also notice there are no plastic plates or cups in this office and no plastic spoons or forks. That stuff has no meaning. It’s disposable. If you’re going to make something, make it beautiful and really respect the craft that it took to make it. The digital kids forget this, but I really respect it.

Why do you throw such elaborate Christmas parties?
To thank the team in my office, because they bust their asses all year long. Last year was our biggest year. We’ve been so busy and so disconnected and travel so much, it’s rare that I get a chance to stand at the front door and shake the hands of 700 people and look them in the eye and say thanks for helping us do what we do. It’s an act of gratitude. It’s also nice to do something totally selfish. If we want to build a castle out of ice and have a drag queen as Santa, let’s do it. Let’s have 40 crazy waiters and build a Garden of Eden. Whatever we want to do, we do.

Do you feel successful?
I don’t think about it one way or the other, really. I don’t think there’s a yardstick to measure that stuff by. I feel lucky that I get to come to work and do the thing I love every day. My mum and dad busted their asses to keep a farm. Now that’s hard.

Skating By! With Rebecca Taylor