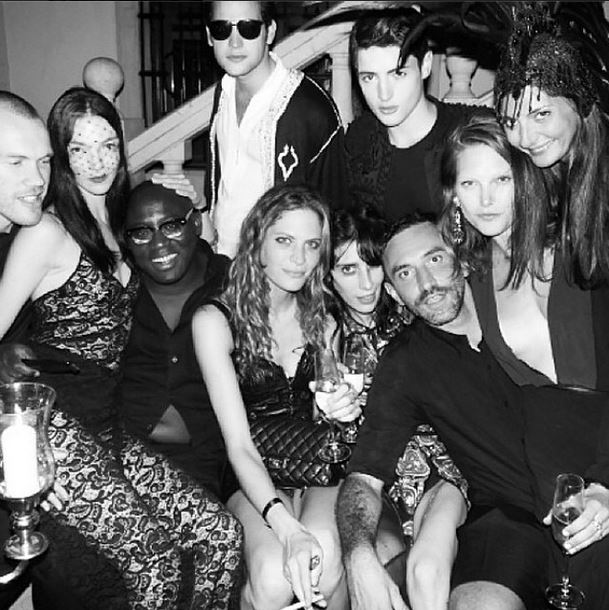 Think you had the best weekend ever? Think again, because that award is going to Givenchy’s Riccardo Tisci, who celebrated the big 4-0 on Ibiza this past Saturday night. And this wasn’t some low-key affair with a basic cake and handful of sparklers thrown in for good measure. Oh no, this epic bash’s guest list included the likes of Kate Moss, Naomi Campbell, Jared Leto, Anna Dello Russo, Jessica Chastain, a few members of the Kardashian Klan, plus Kanye West and Justin Beiber. With the dress code set for black subversive glamour and Beats By Dre hosting the whole shebang, to call this a chic shindig would be an understatement. Luckily, we have Instagram to relive this beautiful birthday night, over and over again.

Did we mention that this crew knows how to celebrate?

Somewhat unsurprisingly, all of the partiers were exceptionally attractive. Case in point:

They even look good in black and white.

And would it really be a party if there weren’t at least three members of the Kardashian/Jenner clan involved? We’ll let you answer that question.

Also along for the ride: Kanye and Justin Beiber.

And Kim Kardashian totally had a reunion with Paris Hilton at the bash. #LovesIt

Tisci also got some one-on-one time with a few supers. Like Natasha Poly…

Plus, P Diddy was there too.

And because it seemed like just about everyone was in Ibiza, Zac Efron and a very bearded Jared Leto came out to play.

Lest you thought Kanye wouldn’t opt for some spotlight stealing, he did. With an intimate performance, nonetheless.

To keep this Tisci frenzy going, simply search #RTBeats40 into your Twitter or Instagram search bar, and watch hours of your life slip by. There’s plenty of fabulousness to catch up on anyways.