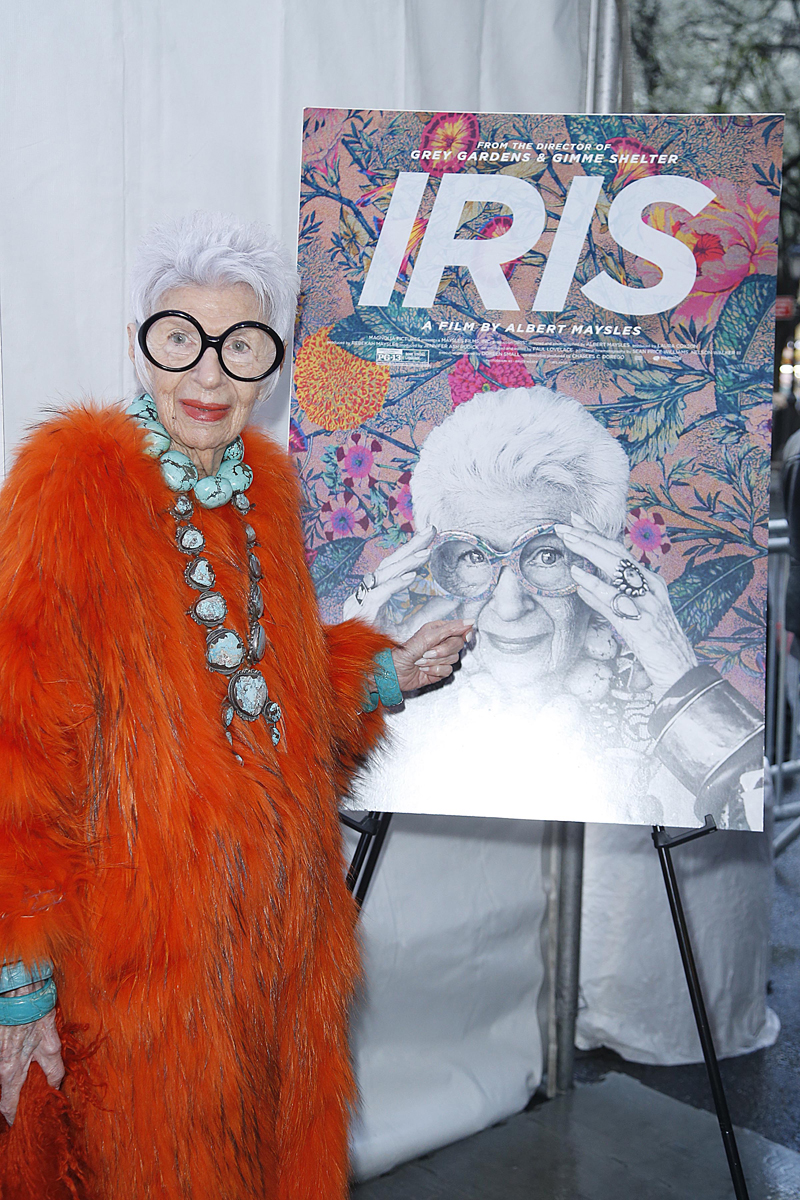 Iris, the last documentary by the legendary Albert Maysles, premiered last night at The Paris Theatre. The location was fitting, as it’s right next to Bergdorf Goodman, which is celebrating the ultimate fashion girl with her very own window. Most of you know Iris Apfel, who has the closet of all closets, is just as comfortable finding a few cheap-y items at Loehmann’s (R.I.P.) as she is wearing designs by her dear friend Naeem Khan, or vintage, or anything intriguing that captures her eye. She’s also not too fabulous to hop on HSN to sell a few goodies that, naturally, sold out. Meet the antithesis of a fashion snob.

The film is essentially a love story between Iris and fashion, but more notably, between the 93-year-old year and her longtime husband, Carl Apfel, who is shown (in one of the most tender moments of the film) celebrating his 100th birthday on screen. We won’t reveal the hilarious banter between the two, but if there was ever a more lovely on screen couple…we haven’t seen it. There are also notable cameos in the film from fashion folks, including Jenna Lyons, Linda Fargo, Mickey Boardman, Alexis Bittar, Bruce Weber, and designer Duro Olowu. Even Kanye West is shown bowing down to her fashion majesty. A memorable sequence shows Iris shooting the cover of Dazed & Confused; it’s filled with humility and humor. Politics were mostly left on the cutting room floor, which we missed due to her statements to The Evening Standard in 2012 where she called Obama a ‘half-wit’. But perhaps Maysles, best known for Grey Gardens, simply wanted to make a film for the people, the fashion people. (The late director also makes a few adorable and welcome cameos in the film.)

Perhaps our favorite Iris look in the movie  is when she dons a Mickey Mouse and Minnie Mouse top. She lives for fashion, but the film documents her must-have look: good health and humor. It also showed that fashion isn’t her only hobby: she surrounds herself with quirky items at home that were collected from travels around the world. Iris also doesn’t mince words when it comes to saying it like it is when commenting on what she thinks of beautiful people, but we’ll let you see that for yourself in the final, beautiful moments of the film about this geriatric starlet. Like the subject, the film is sublime.