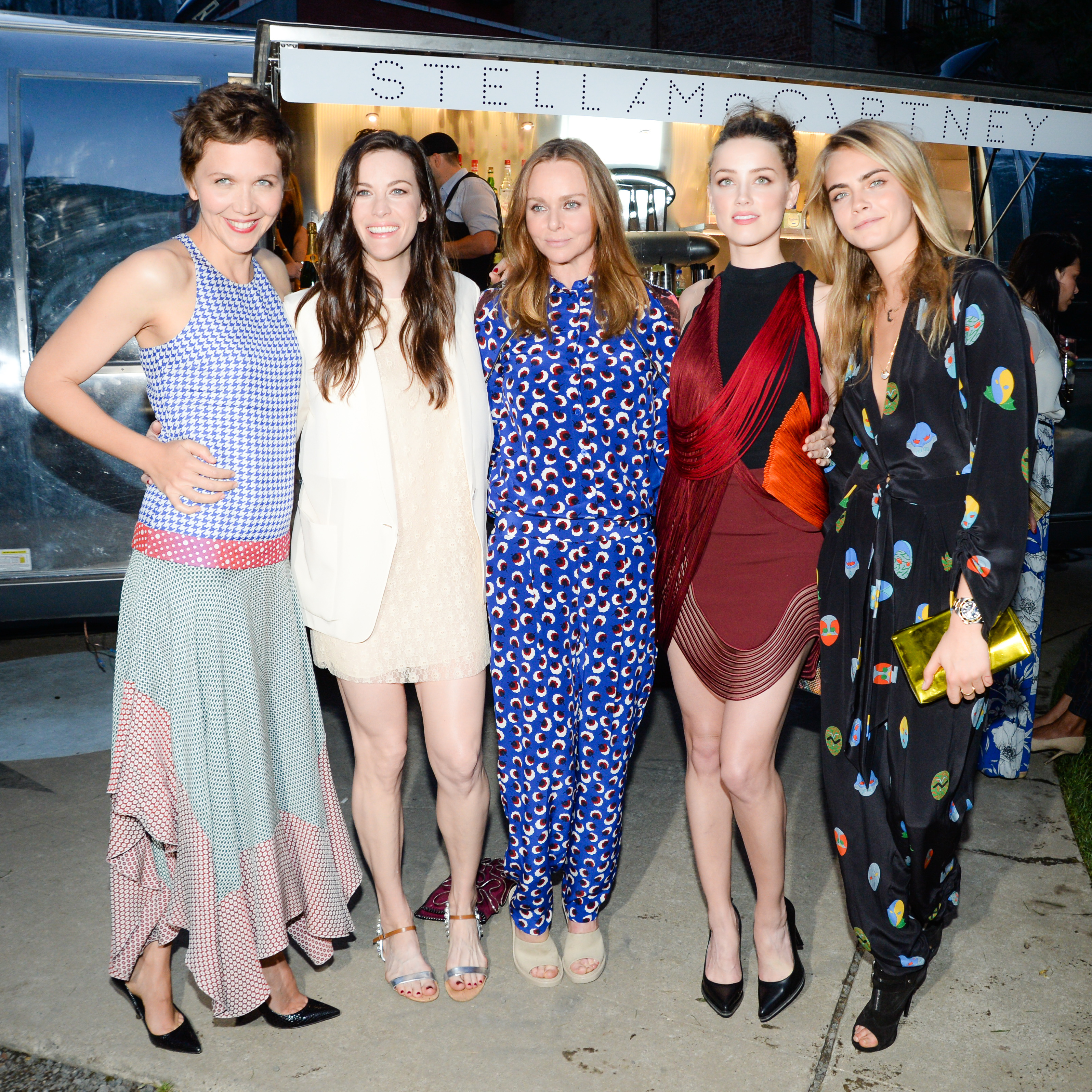 Absolutely tout le monde showed up for Stella McCartney‘s Resort 2015 garden party in Nolita last night. Guests entered the Elizabeth Street Garden, which is at risk of shuttering thanks to overzealous developers, through an arc of colorful balloons and walked into a festive party complete with an airstream trailer set up as a bar, a giant life-size chess set, champagne, hors d’oeuvres, plenty of fashion, and an overall good time. Stella McCartney knows a thing or two about throwing a stellar soirée, so it was no wonder this party was jam packed with A-listers, a posse that Stella McCartney counts amongst her closest pals. Actresses like Maggie Gyllenhaal, Amber Heard, Emmy Rossum, and Stella McCartney bestie Liv Tyler were on hand to fête the designer’s latest collection, as well as luminaries from the art and entertainment realms like Jeff Koons, Peter Beard, Kara Walker, Nan Goldin, Marilyn Minter, and SNL’s Lorne Michaels, plus editor-in-chiefs like Graydon Carter, Stefano Tonchi, Cindi Leive, Eva Chen, and Amy Astley, to name just a few. Plenty of guests brought their significant others: Koons and his wife Justine, Carter and his wife Anna, Beard and his wife Nejma, and the hit of the party—Chen and her lovable giant fluffy white dog, Liger. Editors brought their tots, like Anne Slowey, who spent part of the party trying to track down her darling towheaded kids as they frolicked around the garden.

For some guests, this party was just one welcome fun affair in an otherwise hectic summer schedule. We caught up with Tyler, who was looking radiant as always, in a nude Stella McCartney blazer and short matching lace dress, to see what she had on her summer schedule. “I don’t have any set plans, because I’m working on my TV show The Leftovers and we’re filming until mid-July,” said Tyler. “We have a lot of work and a lot of publicity to do so that’s kind of my summer, but I have little trips planned to my house in the Hudson Valley, which I just bought.” Tyler was at the party supporting her longtime friend McCartney, who she’s known since she was just 18. “We’ve been friends for 300 years!” joked Tyler. The actress then lured over Stella McCartney to help her refresh her memory. “Kate [Moss] introduced us,” said Stella McCartney. “You know, I was thinking about it the other night and I was trying to remember the same thing and I was like, ‘Oh was it at the VH1/Vogue Fashion Awards?’ But you were my date and that’s the night I met Kate Hudson,” said Stella McCartney to Tyler. “I met you with Kate in London, I think, in a room with lots of people, but I don’t know where it was. I was a bit blown away when I met her, because I was a huge Liv fan, but she doesn’t know that! Don’t tell her!” Stella McCartney recounted. Meanwhile, Tyler seemed blown away by the news that McCartney was initially a fan of hers before they met despite almost two decades of friendship. “You were? You were a fan of my work?” said Tyler. “Now she’s a big fan of mine, but at the time I was a big fan of her, little does she know!” quipped Stella McCartney. After their friendly banter, Stella McCartney had to shoo away an eclectically dressed man in a tie-dyed T shirt, who was trying to gift his kimonos to Liv and her dad Steven Tyler. “Excuse me! She’s having her portrait taken by the Peter Beard! Let’s do it right, Liv,” yelled McCartney. Beard spent much of the party snapping away on his camera, but when asked what he planned to do with all of his party snaps, the famed photographer said he didn’t plan to do anything with them. Now, there’s an untapped treasure trove!

Meanwhile, top models like Jourdan Dunn, Cara Delevingne, Hanne Gaby Odiele, Kasia Struss, Jacquelyn Jablonski, and Helena Christensen milled around the party. And we have to say, for a presentation cum party, this one appeared to be fun even for the models. The girls sipped champagne, blew bubbles, danced, played around with moustache masks, and mingled with the crowd in McCartney’s modern boho attire, which included above-the-ankle asymm dresses in a patchwork of patterns with sexy cut-out tops and big wooden platform shoes that looked like espadrilles. Plus, there were some slouchy pants, tops, and bags sporting fun, robot superhero-type motifs. They’re the kind of eye-catchers that are likely to pop up on street style stars and in editorials for months. The collection’s playfulness definitely mimicked the vivacious and youthful vibe of the party; the evening and the clothes were an all around knockout hit.
PAIGE REDDINGER