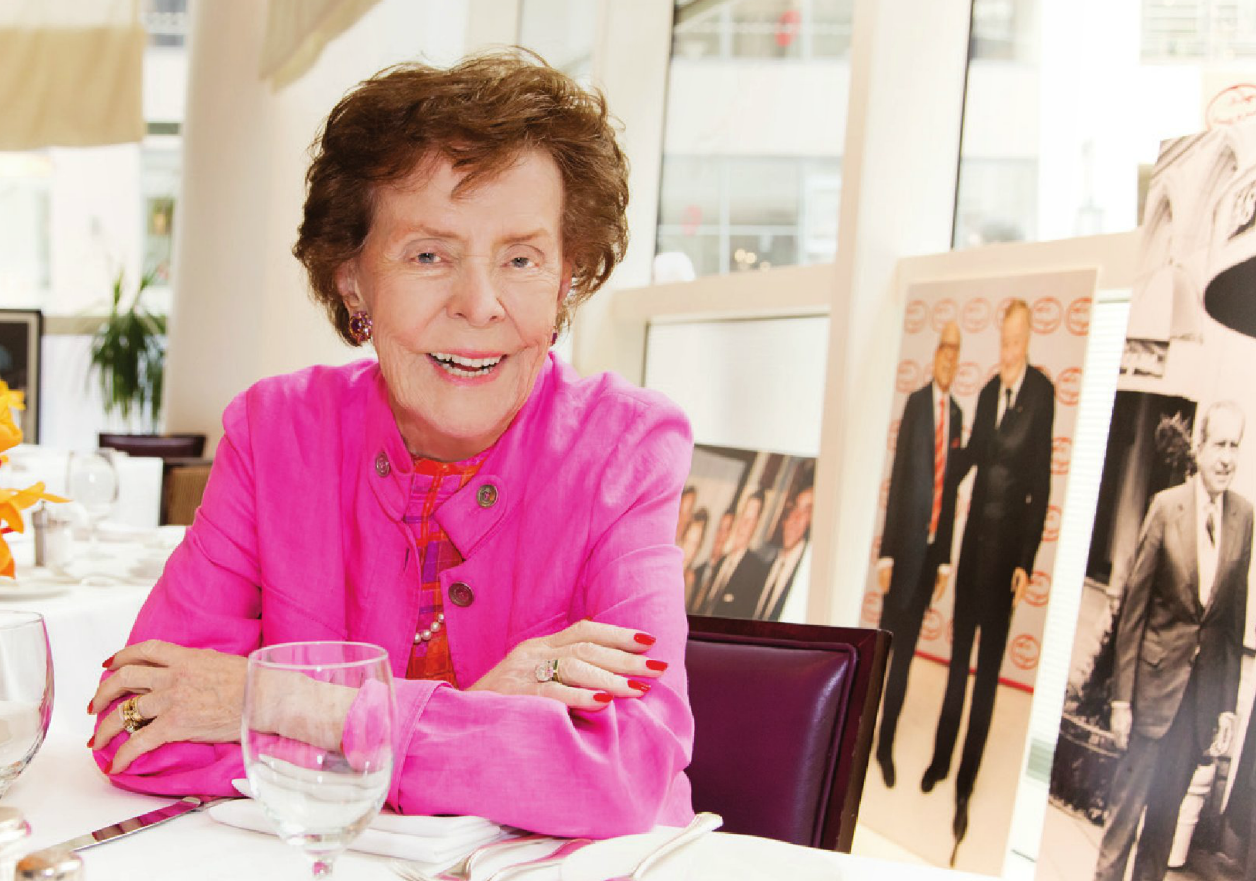 Today, the fashion world mourns the loss of the legendary Eileen Ford, who passed away at the age of 92. Her contributions to the industry are too long to list, but we might not know the names Christy Turlington, Lauren Hutton, or Jean Shrimpton without her. I had the privilege of joining Mrs. Ford for lunch at Le Cirque a few years ago to interview her for The Daily, and it remains one of my favorite stories I’ve done, because breaking bread with a legend doesn’t happen every day. She was also a riot. Enjoy our 2012 chat once again.
BY EDDIE ROCHE

What has been the greatest accomplishment of your life?
That Jerry [Ford’s deceased husband] stayed with me. We were in business together and married for 64 years. A lot of what I did, I did with him. At the beginning, we didn’t have any money. Don’t think I was coming from a starving family, because that’s not the truth, but Jerry had been in the Navy. Did you ever see a picture of him?

He was very handsome!
Yes! And impeccably tailored. He was funny, and a great father. I met him at a drugstore when a friend and I were walking down Broadway. It took me three weeks to get my friend to ask him if he’d like to go to the dance with me.

How did you end up modeling?
I was 19 and working for a photographer, Elliot Clark. It was one of the nicest jobs anybody could have. He asked me if I could model some 1918 bathing suits. I was just out of Barnard, and that was my introduction to the industry. My mother had told me that I was going to law school, and I believed her, but then I met Jerry and I became a secretary who could type and do shorthand and bookkeeping. To this day, I still don’t know how to do long division. Anyway, at the time, I also knew models who were looking for representation, so Jerry and I decided to try it!

What was your strength?
I could pick models, and I could sell. Soon, wherever we went, people were writing a story about us. Life magazine did a story about Ford as a family-style modeling agency. It’s true! My daughter, Katie, was born and we were having a really good time. We knew everyone!

Who were some of your first success stories?
Suzy Parker, Mary Jane Russell, Jerry Hall, Christie Brinkley. I’m still very close with Carmen Dell’Orefice, Jerry Hall, many of them!

Who were you looking for at the time?
I wasn’t looking for them, they were looking for me because I had signed Suzy Parker, who was the biggest model at the time! I just always had a feeling about certain models. When Lauren Hutton walked in, I just knew.

Richard Avedon’s photography helped make many of your models famous.
Dick and I were good friends. So many stories! I once sent China Machado to Vogue, but the editor called and said they didn’t like her. I was crying so I called Dick, who was around the corner, and he said that I should send her over. He made her career, and the rest is history!

You’ve often been referred to as the Godmother of the industry. How did you get that nickname?
Sugar and spice and everything nice – which we turned into cold, hard cash.

Who negotiated the deals?
Jerry. He was considered reasonable. I did negotiate Christy [Turlington]’s contract with Calvin. I love Calvin!

What did it mean to be a Ford model?
The models were safe; we really took good care of them.

When did you feel like the agency was a success?
I don’t know that we ever thought too much about success, it just became one. We were lucky.

How did you sign Christy Turlington?
An agent in Florida told me about her, and I brought her to New York. When she was young, she lived with us, but she’d sneak out of our house at night.

You have such a good memory!
I have a great memory, and I can read without glasses, but I am deaf! When you get to that point, know that every audiologist is going to tell you the same thing, and you’re going to fall for it each time!

Of all the girls you managed, who was the most successful?
Christie Brinkley is right up there. NO matter how much the media crucifies her, she is really a good person.

Who made the most money?
I haven’t a clue. I just didn’t look at them that way. Jerry made sure they saved whatever they earned, though!

Are there any models you wished that you had signed?
Probably Marisa Berenson. I turned her down, and it was a mistake. I have a very convenient memory that erases what I don’t want to remember.

Which model was most groundbreaking?
Jerry Hall. God knows she lived how she wanted to. In essence every group of models back then changed how everything was. They became international travelers. They became a lot more business-like. When you look at the girls today … that Gisele! She’s not joking around! Heidi Klum isn’t, either.

What do you think of today’s agencies?
I have no idea! But I do know that there is no such thing as family life at work. Our staff always did things together – we’d vacation together, all 19 of us!

Did you ever work with Diana Vreeland?
She’d call me from time to time. I did not call Mrs. Vreeland. She’d say (imitating Vreeland), “I’m thinking about hair! Long, wonderful, shiny hair.” (laughs) But there are many editors whom I considered friends. We’d have lunch on Fridays, and they would drink.

Grace Mirabella?
We are friends. I was looking up her name in the phone book yesterday.

Anna Wintour?
No, not at all. Katie knows her, and she always smiles and nods at me in front of The Ritz. There’s no point in being friends with someone who knows precisely who she wants to be friends with. Did you see Vogue in August? They did a two-page article about Katie. She was married to André Balazs, you know, and they divorced, but André and I are still very good friends. I understand he wasn’t an ideal husband, but he was a really nice son-in-law, and still is.

What do you read?
Every day, I read The Wall Street Journal, but I always start with The Post. On the weekends I read The Times.

Jerry passed away three years ago. How’s life without him?
I don’t have anybody to cuddle up to. I made up an ad that said, “If you’re in your eighties, have a jet, and a Bentley, call me.”

That’s funny!
I just made that up.

Long-lasting marriages like yours have become rare.
The problem is that it’s too easy to get a divorce. People don’t think it out.

Who do you spend the most time with these days?
I live in New Jersey, and I see friends and my family. Every so often I see André.

You had a fire at your home a few years ago. Did you lose everything?
Well, the wine cellar was saved. I made a sign that said, “Sin will win.”

What do you think of plastic surgery?
I wish I had done what I’d like to do now long ago.

Do you still feel beautiful?
Beautiful? I think I look OK for a 90-year-old.

Do you read any fashion magazines?
I’m reading the first Agatha Christie mystery that was written in 1920. I read a lot. I read quickly and then don’t have another book ready. I haven’t watched Judge Judy in weeks!

John Casablanca is on record as saying some not-so-kind things about you. How did that make you feel?
Why should I give a damn about what John Casablanca says about me? I always had a certain approach to business. It’s like politics, you can’t allow yourself to get upset about your running mate. If somebody that I liked had said something nasty about me, I would have popped him in the mouth. I sent John a card recently, when he was sick. I also write thank you notes.

You seem to be in great health!
You’re always in great health until you’re not. I’ve been through a brain tumor, and I recently went through radiation. I call my therapist Dr. Frankenstein. He makes me do exercises that I don’t think I can do and won’t let me finish until I can do it.

Shall we get the check?
Are you really taking me to lunch?

It’s our pleasure! How does it make you feel to be a fashion legend?
Wouldn’t you like it? I didn’t realize it until you just said that.

You changed everything!
Well, I don’t know. We just made an industry out of chaos.