Regarding Henry: The Who's Who At The Henry Street Settlement Gala 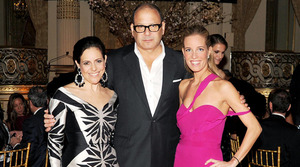 (NEW YORK) Returning to its former fund-raising grounds at The Plaza after a stint at Gotham Hall last year, the Henry Street Settlement Gala brought out fashion’s finest on Thursday night. The organization, which was founded in 1893, provides numerous services to New Yorkers like transitional shelter, domestic violence shelter, primary health care, and summer day camps to name a few, and was the first official homeless shelter in the nation. This year the gala’s honorees were Reed Krakoff, president and executive creative director at Coach as well as his own eponymous label, Alexandra Lebanthal, CEO at Lebenthal & Company LLC, and Carolina Gonzalez-Bunster, co-founder of the Walkabout Foundation—all of whom were commemorated for their philanthropic efforts.

The gala dinner co-chairs included: Natalia Gottret Echavarria, Kalliope Karella, Angela Mariani, Anna Pinheiro, Melisa Melling, Pilar Crespi Robert, Lesley Schulhof, and Barbara von Bismarck. Mingling amidst the night’s honorees and co-chairs were Tommy and Dee Hilfiger, Bibhu Mohapatra, Claire Courtin-Clarins, Lola Rykiel, Alina Cho, Annelise Peterson and Valerie Boster. Supermodel Carolyn Murphy also made an appearance to support longtime friend Reed Krakoff. Murphy was last in town two months ago for New York Fashion Week where she made a stunning return to the catwalk on Francisco Costa‘s runway for Calvin Klein Collection. “It seems so long ago already. That’s fashion, right?” said Murphy. Surprisingly, years spent revving up the runway still frazzles the nerves. “I was nervous as hell, but I had fun!” says Murphy. “Afterward, I zoomed right onto a plane to L.A. for a Valentine’s Day dinner.” What’s the beachy-blonde California babe up to when she’s not triumphantly returning to the fashion world? “I paint, I sculpt, I do interior design, and I’m a mother. Now that my son is 12, he doesn’t need me so much anymore, so I’m rediscovering creative things that inspire me.” Although she wasn’t dressed in red, she was certainly painting the town with plenty of pretty.
PAIGE REDDINGER

Sunset Time, All The Time