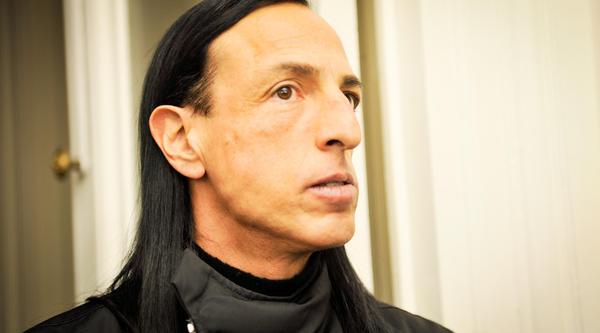 When we spotted Rick Owens and his wife, Michele Lamy, front row at Gareth Pugh we had to grab a few moments with one of the nicest designers in the biz. Find out how they met Mr. Pugh (in whose business they now have a 49 percent stake)! Plus! How much time does he devote to his immaculate physique?

Can we ask you a few questions?
Sure! Where are you from?

The Daily Front Row.
Oh, The Daily! I read that sometimes. I don’t read a lot of New York publications normally, but I like The Daily.

Thanks! How did you first meet Gareth?
He had worked with Michele in fur and I get to enjoy him as a friend. We have dinner together all the time in L.A.

Do you go to any other shows during fashion week in Paris?
I go to Raf Simons‘ show [at Dior] sometimes. We’ve always been friendly and I admire what he does. Alber [Elbaz] is such a nice guy and I haven’t been to one of his shows, but I really should.

There’s purportedly a ferry from your show to Lanvin this year. You should hop on and go!
Shouldn’t I? I think that would be great, but I’ll probably be so burnt out after my show that I wouldn’t be able to appreciate it. The ferry is such a great idea! It can be a schlep to the shows sometimes.

Where do you like to escape in the winter?
Dubai and Abu Dhabi because the water is so great there and it’s only four or five hours away. Maybe six. That’s where we’ve been going recently.

Where do you stay?
In Dubai we stay at the One&Only Royal Mirage. It’s on the beach and you have your own house. But you know what’s great about it? It’s so eerie. I love Morocco and places like that, but in Dubai and Abu Dhabi there’s something futuristic, weird, and freaky about it. The water is so unnaturally clear and clean.

You’re quite fit! How often do you work out?
Almost every day. I work out for about an hour, but it’s slow. I don’t push myself. I used to push myself years ago, but now it’s just more about maintaining.  If I was really committed during that hour everyday I’d probably be a lot bigger. It’s just about escaping for me. I’ll listen to loud music like Katie Got Bandz and Black Asteroid and, you know, look at myself in the mirror.

Rick Owens Is Bringing Back JNCOs —...

Has Rick Owens Lost His Edge?