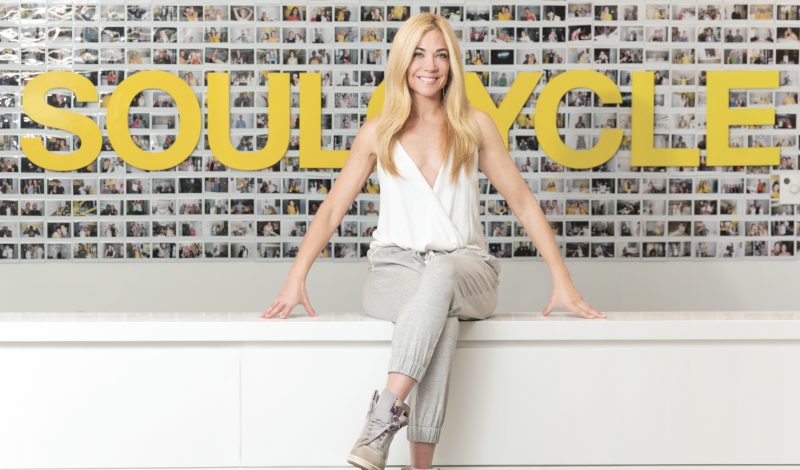 A lot of fashion designers are into SoulCycle, but few are as committed as Ramy Sharp, who discovered spinning eight years ago and has been an addict ever since. Her new six-piece mini collection of post-workout wear will be available at select SoulCycle studios and on RamyBrook.com starting May 24, and includes dresses, shorts, tops, and pants to wear after your ride. We caught up with Sharp to watch her wheels turn.
BY PAIGE REDDINGER

How did the collaboration come about?
I always talk to Elizabeth [Cutler] and Julie [Rice], the owners, because they’re amazing. Every step they make, every PR move, every instructor they hire, every studio they open, they’re always striving to do better and be better. They never forget their client and their audience. It’s about getting a better experience for the rider. They’ve grown this business tremendously over the years. We have this friendship and they knew me before I started my company. I started in 2010 and they started in 2006. They were really supportive and really happy to see me start this business. Anything they could do to help me grow, it came naturally to them and it came out of the goodness of their hearts. It’s always interesting for me to talk to them and learn from them and get their advice. Julie was the one that came to me. They’ve seen how I’ve dressed for years and how I dress when I leave spinning. She was like, “Let’s do something together” and I said “Great!” It’s been a true collaboration, from the styles, to the colors, to where we place the skulls and the wheels. It’s been a true joint venture. It’s been amazing.

Is casual or post-workout wear something we’ll be seeing permanently from your brand?
It wasn’t meant to be for actually working out. It was more of a to-and-from collection—to the gym and from the gym. One day my brand will include everything from shoes to perfume and everything in between, which is my ready-to-wear, my casual line, and workout wear. My plan is to be a full lifestyle brand.

Do you think workout or post-workout clothing is a big trend?
I think it’s a huge category, because a lot of people spend most of the day in that clothing. But you still want to look good and dress well. It’s important that whatever you put on your body, you have that feeling.

Were some of the pieces you designed based on things you were already wearing?
One hundred percent. I grab things that are easy and can roll up in my bag and not wrinkle. The clothing that I designed is meant to do that. The pants, the tops, the dresses—they’re all easy pieces you can roll up in your bag, and when you take it out, it still looks good and feels good.

How many times a week do you go to SoulCycle?
On average, five days a week. I love it. If I have the time I’ll definitely double up on classes.

What about when you’re in the Hamptons?
It’s the same. SoulCycle for me has become a part of my day. I like to start my day with spin class.

What location do you normally go to?
I generally go to the West 77th, 83rd Street, and Tribeca locations. In the Hamptons, I go to Bridgehampton because that’s where I live. I go to East Hampton often, too.

Which locations will carry the collection?
The collection starts at $98 and goes to $155 and will be sold at Watermill, East Hampton, and Bridgehampton. Watermill’s one of their newer locations. In the city, it’s going to be sold on East 83rd and it will be available on RamyBrook.com. It will also be sold at SoulCycle locations in Roslyn, Short Hills, and Greenwich.

How did you find out about SoulCycle?
I was working out at another spinning studio in the Hamptons called The Zone, which doesn’t exist anymore. It was very big at the time about 10 years ago. I met Elizabeth and I heard that these girls were starting a new studio in New York City. There wasn’t anything like that in New York at the time. There was The Zone in the Hamptons and there wasn’t even a Zone in New York City. It was exciting that they were opening up a spinning studio. Before that you would spin at an Equinox or a gym.

What was your first spin at SoulCycle like?
The first studio they opened was on West 72nd street. It was a building and it was in the back of a lobby. There were like 40 bikes. I knew two of the instructors at the time. One came from L.A., Stacey, and then there was another instructor I knew from the world of spinning. The first class was very inspirational. It was dark and they lit candles. The music was amazing and still is amazing. Then the words they would say while you were on the bike made the workout appealing and enjoyable.

Do you think SoulCycle has become a fashion hub?
It’s fun to watch how the girls come to spin in a cute beanie hat and a cute sweatshirt. They’ll dress it up with a scarf and a vest. It’s a stylish and good-looking crowd.

How would you describe the lifestyle of SoulCycle?
It’s become a family for many people. We want to socialize and we want to go out. It’s become a part of my growing social life.

When you come up with new concepts, do you consult your friends?
I developed this line, because it seemed so natural to do. It seemed so obvious to me to develop something so casual, cool, sexy, and easy. When I developed it, it was hanging in my showroom and my friends saw it and they were like, “We want one of everything!”

How would you describe the aesthetic of the collection?
It’s the same as my ready-to-wear line. I always say that my clothes are a solution for people like me, who don’t know what to wear. I’m like, “I have these jeans, but I don’t know what to wear on top!” The SoulCycle collaboration fulfills that need, but at a casual level. It really is that solution, because I know I’m going to the Golden Pear after I work out and I don’t want to wear my workout clothes. My handbags are going to do the same thing. They’re priced at a decent, contemporary price point. You can buy that blue suede bag and not feel that it’s your one bag for the season. It’s a solution to wear something fun. I consider my brand a solution for many people.