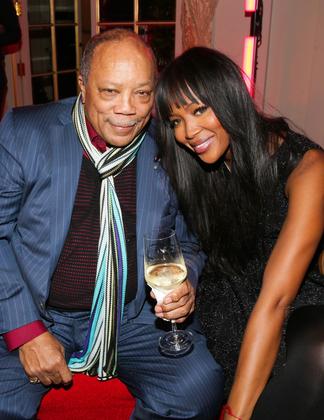 Surprise guest alert! As usual, there haven’t been too many celebs in Milan, but when we spotted the legendary American record producer, conductor, and friend of Naomi, Quincy Jones, at Missoni over the weekend, we had a few questions for the man who knows EVERYBODY…

What brings you here?
My oldest friends in the world are the Missoni’s. I stayed with them. I’ve known Fabio for 30 or 35 years.

How did you meet them?
Through Claude Nobs, who owns the Montreux Jazz Festival. I have a picture of when we first met. I had a lot of hair. That was before I had six daughters! Daughters don’t allow daddies to have hair.

Are any of your daughters here?
Just one! I can only handle one at a time.

Where are you staying while in Italy?
With the Missoni’s in Sumirago. Right next door to their factory.

Nice! Where do you like to dine while you’re here?
Oh my god, there is a place right next to them in Sumirago. Oh, it was the best food I ever had in my life! We had sardines and I had linguine vongole…all my favorite stuff.

Where do you vacation in the winter?
In the winter? I don’t have a winter in L.A.! I’m at home. But I was in Stockholm for 10 days because I’ve been going there for a long time. I have a lot of friends there. I see the doctors over there at the Karolinska Hospital and they make sure I’m OK. I’ve also been to the South of France, and next I’m going to Dubai and Abu Dhabi. We have a music festival there. I’m friends with the royal family.

You know everybody! Who are some of your favorite new artists?
John Legend and Bruno Mars. I was at John’s recent wedding at a villa in Lake Como. It was fantastic. He looks just like my baby brother, you know. My brother is a federal judge in Seattle. They know each other!

Do you ever go to Paris?
I used to live there. I used to live in Neuilly [Neuilly-sur-Seine] right next to the American Hospital. I started there with Nadia Boulanger and I ran a record company called Barclay Records, so there were people there like Charles Aznavour, Brigitte Bardot at 24 [chuckles], Catherine Deneuve…we had good times. I also lived in St. Tropez in ’57 and we lived right next door to Picasso and his wife, Jacqueline.  Before it was what it became today, it was a fisherman’s village. Then girls stopped wearing bras and all of that.

How crazy that you knew Picasso!
We became good friends.

What was Picasso’s house like?
It was a huge villa. We were right next door in our own villa, but I used to see goats and ducks on the third floor of his place. Jacqueline would write to me on the back of cards that Picasso painted.