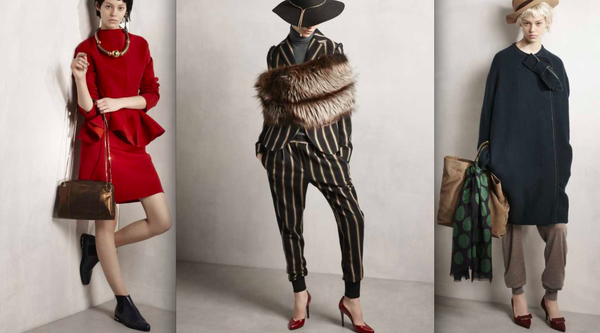 (NEW YORK) Lanvin
Walking into the Lanvin Pre-Fall presentation yesterday was a feast for the eyes, and not simply because of the clothes. The 8th floor of Milk Studios housed a set featuring mannequins hung like mock marionettes from rolling racks, lounging on chairs, and reclining on boxes, staring at their reflections in the mirror. Their heads, which were giant oversized masks with exaggerated coifs, hung suspended over the bodies.

The effect? A sense of cheekiness that’s become a signature of the house’s beloved designer, Alber Elbaz. “We actually did [marionette-like mannequins] for a window display in Paris and we made more of them to bring here. They were created by our visual department and I just thought it was so much fun for 2014 to start the year with something that’s almost a continuation of Christmas,” said Elbaz of the mannequin displays. “We do pre-collections twice a year, and I always try to do it a bit differently. They say in English, ‘If it’s not broke, don’t fix it.’ I think the whole idea is to change it so it won’t break.”

While there were a few cocktail dresses in keeping with Mr. Elbaz’s specialty, like a stellar black one-shouldered asymmetrical dress featuring a hemline adorned with ostrich feathers, much of the collection was about daywear. That meant pantsuits with slouchy oversized trousers, or a striped pantsuit with sporty trousers (cut a bit like sweatpants) dressed up with a grey fur stole wrapped around the shoulders. Plus, there was plenty of fabulous outerwear, like an emerald green shaggy fur coat or a coat with long black goat hair that fell below the hem. There was a long emerald green T shirt dress, plus a office or after-work apropos cherry red pencil dress. And, of course, there were plenty of Lanvin’s now-ubiquitous accessories, along the lines of those “Love”-festooned necklaces that were so haute last season. This time around, Lanvin lovers will be clamoring for a big, double-chained version that said “Kiss You”. Other generously-proportioned pieces included giant gold cuff necklaces and big studded heart pendants. In other words, this collection will likely be flying off the racks for the Lanvin lady looking for “everyday” statement pieces.