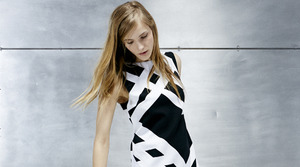 (NEW YORK) Tibi
Angular graphics grooved with slouchy layers and hits of colorblock in Tibi’s offering for that innately buyable Pre-Fall season. Black and white presided over the alternations of minis and stovepipes, with a few knee-grazing shorts and skirts cut to the same general hemline in the mix. When jewel tones made their cameos, it was in a roster of well-edited hues (think a shade of cerulean, a tunic in marigold, or a strong-shouldered frock rendered in vivid grape). Print took shape in weaves of that aforementioned B&W motif, offering an eighties-tinged spate of toss-it-on ease in daily dressing. Consider us tickled, Tibi.

Nonoo
Tea time, anyone? Designer Misha Nonoo harkened back Victorian-era traditions of the afternoon hours for her femme yet non-prissy collection. The ladylike strains (flared skirts, integration of chiffon and silk faille, and bits of lace) inspired by the late 19th century, namely Duchess of Bedford, Anna Russell, taken into 2013 thanks to brief hemlines on a number of getups, interesting textural mash-ups, and the use of a robin’s egg shade of shaggy alpaca. Updos tied together Nonoo’s whole take on a tailored lass addled with quirk to spare.

Black, White And Right All Over