Pratt Inducts The 2013 Class Of Legends 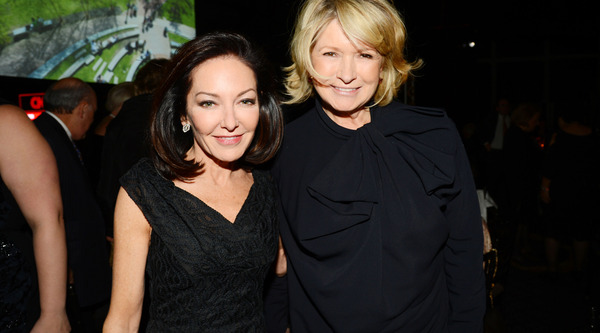 (NEW YORK) Far from the college reunions that plague the personal calendar of alums everywhere, Pratt’s Legends 2013 Gala was an elegant event. The program for the evening was packed with notable speakers and honorable award winners, bringing to the table backgrounds in advertising, architecture, directing, and writing pasts, still allowing sufficient time for a surprise. The gala, which raises funds for the 80 percent of Pratt students who are granted financial aid annually, drew a crowd of 350 supporters.

The 35th floor lobby of the Mandarin Oriental Hotel played host for the cocktail hour, where excellent view of Columbus Circle was a sweet addition to the live jazz. A gong announced the start of the dinner portion of the eve, and guests filed up the circular staircase to find their place. Attendees sat down to a butternut squash salad topped with pancetta, as the evening’s emcee, Ted Allen, took his place at the mic. A tribute to Pratt’s president Thomas Schutte’s 20th year at the institution culminated in the surprising announcement that the evenings’ funds would be put towards a new scholarship, named after him and his wife: the Thomas F. and Tess L. Schutte Endowed Scholarship fund. A standing ovation for President Schutte and his continued efforts at the school left him speechless, wiping away a tear of gratitude.

The feast continued with a mod take on meat and potatoes: a braised beef short rib atop parsnip puree, decorated with a smattering of root veggies. Once the tables were cleared, the chattering piped down to welcome Martha Stewart onto the stage, as she presented an award to her dear friend and architect, David Easton. While Easton has yet to create a residence for Stewart, he opened his remarks by announcing; “Someday we will marry,” which was followed by a healthy round of laughter. Next up? Bob Giraldi, one of the original Mad Men (he was a creative director at the Y&R ad agency in the Seventies) called écrivan Pete Hamill to the stage. “I had very little money,” said Hamill of his Pratt career, “but it was one of the richest times in my life.”

A familiar face to the Pratt’s Legends Gala, Margaret Russell, the sharp-heeled Architectural Digest EIC took home an award as well. She accepted her hand-carved glass sculpture from David Rockwell, of the Rockwell Group architecture firm. Russell told The Daily: “To be called [a Legend] is such a lovely thing, but I don’t really feel like one; what I want to do is to help create legends.” Carmen Giménez introduced the last honoree of the night, James Turrell, who had the crowd in stitches during his acceptance speech. “I woke up seven years ago and there was a Pratt alumni in my bed, so they certainly have gotten everywhere you could have imagined,” Turell joked. His wife, Kyung-Lim Lee, was a graduate of the school and while the artist himself didn’t graduate from the institution, he quipped: “I should have gone there!”

After the last bout of applause, guests dug into their dessert duo of Devil’s food cake and a fruit meringue tart, washed down with the final notes from the jazz band that made frequent appearances throughout the night. The mix of select Pratt students and faithful supporters of the school joined forces, raising $800,000 to allow future students a chance to try their hand at Pratt.
DENA SILVER